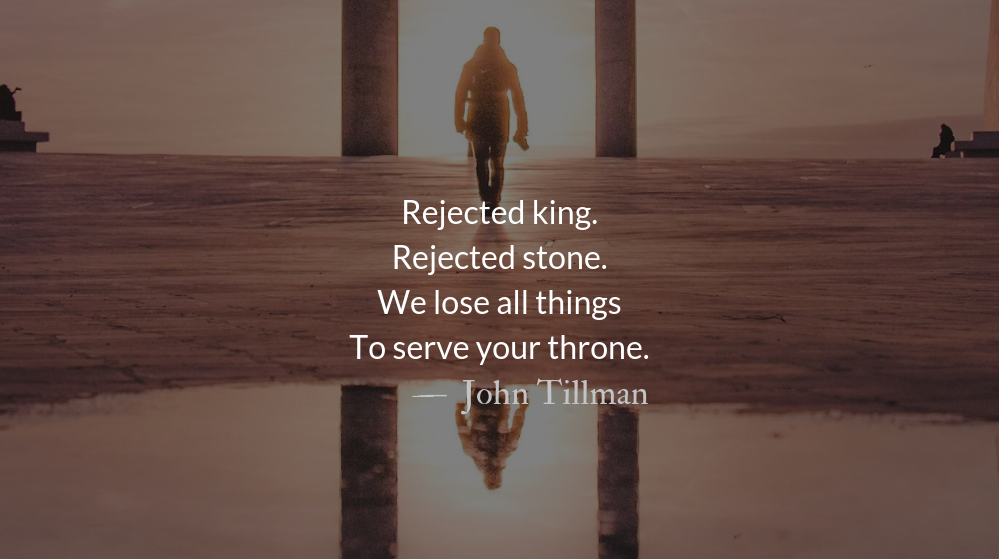 Daniel 9.18-19
We do not make requests of you because we are righteous, but because of your great mercy. Lord, listen! Lord, forgive! Lord, hear and act! For your sake, my God, do not delay, because your city and your people bear your Name.

Psalm 118.21-22
I will give you thanks, for you answered me;
you have become my salvation.
The stone the builders rejected
has become the cornerstone

Daniel, despite his worldly comforts and esteem, had this in common with Jeremiah and Ezekiel—he felt deeply the shame and pain of his exile.

Though Daniel, in Babylon, moved in royal circles as Moses had in Egypt, Daniel was not an adopted son, as Moses was. He was not free, as Moses was, to escape to the desert. But, in this passage especially, we see that Daniel, like Moses did not identify himself with the wealth and privilege that surrounded him.

Daniel recognized his true position. He saw the reality that he was, in truth, a slave.

Daniel assimilated into the culture forced upon him but, as much as possible, refused to let it become part of his identity. One example of this is retaining the use of his Hebrew name, Daniel, rather than the name given by his captors, Belteshazzar.

Daniel, Jeremiah, Ezekiel, and the other prophets never, to our knowledge, met face to face. But in suffering, in struggle, in exile, in pain, and through their writings, they are intimately connected.

From Ezekiel’s writings we know that Daniel was, during his lifetime, considered one of the greatest and most righteous men in history, held up in comparison with Noah and Job.

In today’s reading we see Daniel, this great and righteous man, devoting himself to the study of the writings of Jeremiah, referring to them as the Word of God.

In the world, we find frustration, pain, rejection, exile, and shame. Even Daniel, the most famous, privileged, powerful, and revered of the prophets felt these things. Daniel found comfort, wisdom, inspiration, and community through studying the scriptures and prayer and fasting. In this, we can follow his example.

We can, with Daniel, recognize that our position in this world is that of slaves and exiles, but our redemptive destiny is to reign with the coming, rejected King of Kings.

Rejected king.
Rejected stone.
We lose all things
To serve your throne.

Rejected stone.
Rejected king.
We are your own.
To you we sing.

Prayer: The Morning Psalm
You have shown me great troubles and adversities, but you will restore my life and bring me up again from the deep places of the earth. — Psalm 71.20

Additional Reading
Read more about In Praise of Christ’s Righteousness
God specifically tells Ezekiel that not even the greatest, most righteous men he might trust in would be able to save the nation. Not Daniel, not Noah, not even Job.

Read More about Resisting in Faith
Daniel lived undefiled, resisted the whims of an evil government, and influenced the course of an empire through simple faith and regular practice of spiritual disciplines.