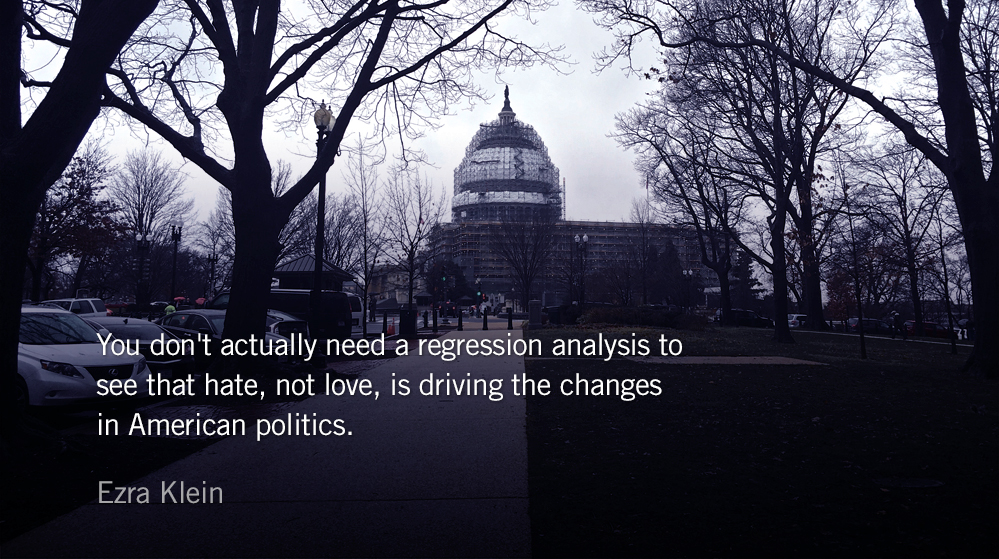 “You don’t actually need a regression analysis to see that hate, not love, is driving the changes in American politics,” writes Ezra Klein. The (well documented) deep divides between political parties in the U.S. have grown at alarming rates.

When people are caught in a system dominated by hate there is an opportunity for Christians to participate in redemption. The preponderance of brokenness in our world today, both foreign and domestic, should drive us to prayer with extraordinary vigor. Yet we are often reticent to get involved in politics.

N.T. Wright, commenting on why the New Testament needs a command to spur Christians toward praying for political leaders and those under their rule, explains:

For many Christians today, particularly those who (like me) have grown up in the Western world and have never known war or major civil disturbance in our own country, this often seems quite remote…. Yes, we’d like our politicians to use our tax money more effectively, we grumble about some of their policies, but what they do doesn’t drive us to our knees to pray for them, to beseech God to guide them and lead them to create a better world for us all to live in.

Many Christians who are reasonably content with their country are tempted to think that praying for kings and governments is a rather boring, conformist thing to do. It looks like propping up the status quo.

Far from seeing prayer as the easy way out, Scripture challenges us to hold it as the most complex, efficacious, and important thing to which we can give ourselves.

Where we know victims by name we can bring them before God. Where we know of great needs, pain, or injustice without knowing any of the victims or leaders serving them, by name, we can repent. Wright concludes:

In the New Testament, the call to prayer is also the call to think: to think clearly about God and the world, and God’s project for the whole human race. Don’t rest content with the simplistic agendas of the world that suggest you should either idolize your present political system or be working to overthrow it. Try praying for your rulers instead, and watch not only what God will do in your society but also how your own attitudes will grow, change and mature.