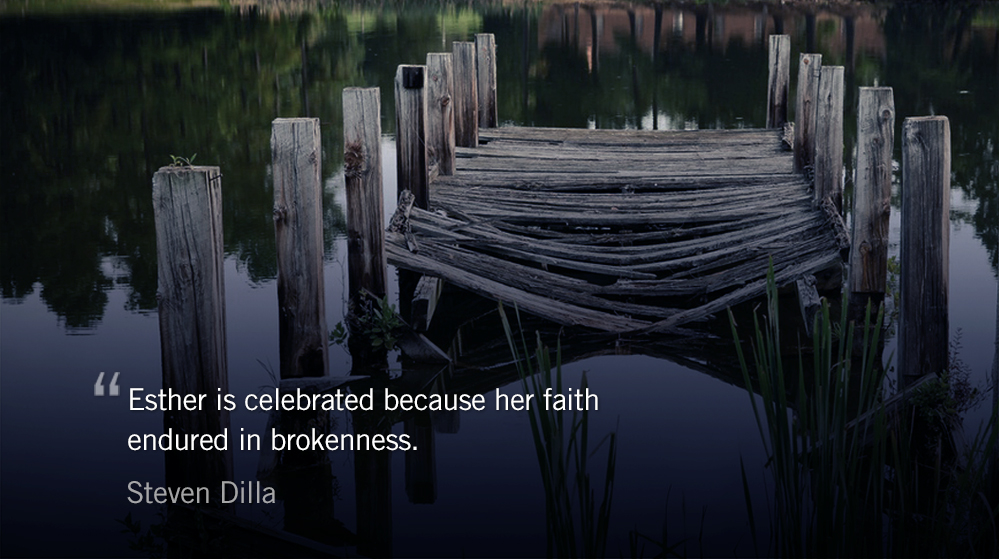 In the evening Esther would go in, and in the morning she would return to the second harem… She would not go in to the king again, unless the king delighted in her and she was summoned by name. — Esther 2.14

The ache of self-rejection resides in the depths of the human heart—somewhere beyond the reach of other people’s affection. It grows through the pain inflicted by others, but most rapidly through personal failure. Remarkably, even the misplaced compliment of others can deepen the wounds of self-rejection.

Given the course of Esther’s life, it’s far more likely the book bearing her name should chronicle the story of a broken woman than the hero God chose to save his people. Even today some commentators stammer as they write of her story, noting her “unspiritual lifestyle,” and “unfaithfulness” to the law (it is recorded that she ate unclean food, had intercourse with a man who was not her husband, and married a pagan). The judgment upon her would have been even greater in her day.

The role of an ancient harem was to exist in perpetual beauty—ready for a king who might summon any of the women at any moment. After a preparation period in a harem for virgins, the woman would be summoned to the king’s chambers for one night. Following this she would go to a second harem, to be called again only if she performed well the first time.

Esther must have wept often—staying alive under the rule of a brutal pagan king required she repeatedly compromise her faith. Though diplomatic acumen becomes the highlight of her story, she is judged primarily by her body and taken in as a sex slave.

“Over the years, I have come to realize that the greatest trap in our life is not success, popularity, or power, but self-rejection.” writes Henri Nouwen. He continues:

When we have come to believe in the voices that call us worthless and unlovable, then success, popularity, and power are easily perceived as attractive solutions. The real trap, however, is self-rejection.

As soon as someone accuses me or criticizes me, as soon as I am rejected, left alone, or abandoned, I find myself thinking, “Well, that proves once again that I am nobody.”

And yet Esther’s story does not stop here—she is redeemed and empowered by her God. She is celebrated because her faith endured in brokenness. Her victory obtained not by her ability to overcome, but by God’s ability to restore her wasted years. It cannot be missed, as Nouwen concludes, that:

Self-rejection is the greatest enemy of the spiritual life because it contradicts the sacred voice that calls us the “Beloved.” Being Beloved constitutes the core truth of our existence.