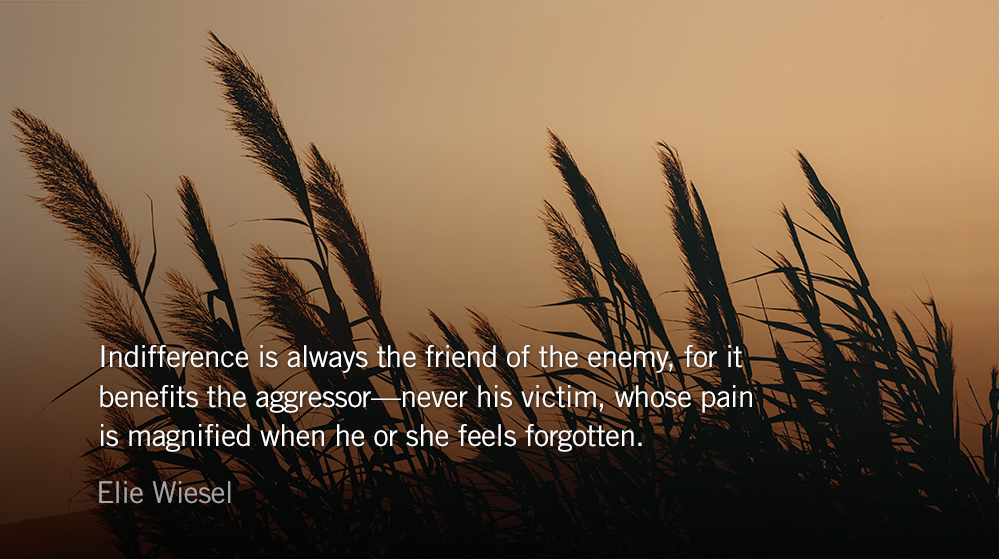 And God said to him, “Your name is Jacob; no longer shall your name be called Jacob, but Israel shall be your name.” So he called his name Israel.

Reflection: Not Forgotten
The Park Forum

What does it mean to be Jewish? I’ve posed this question to a handful of rabbis over the years; most respond by saying it means to struggle, citing Jacob’s wrestling with God prior to receiving his new name and ultimately the name Israel. All of the rabbis draw from a shared past to explain the present.

The ability to hold hope for the future is built on the ability to remember the past. We see this in the first parts of Israel’s story—God’s faithfulness is expressed through the word, “remember.” When the authors of scripture say God remembers someone they are not contrasting it to God’s forgetfulness, but the world’s.

Our forgetfulness takes many forms—all of which compound the brokenness of the world. “Indifference,” Holocaust survivor Elie Wiesel said in his 1999 speech at The White House, “is not only a sin, it is a punishment.”

Indifference is not a response. Indifference is not a beginning; it is an end. And, therefore, indifference is always the friend of the enemy, for it benefits the aggressor—never his victim, whose pain is magnified when he or she feels forgotten. The political prisoner in his cell, the hungry children, the homeless refugees—not to respond to their plight, not to relieve their solitude by offering them a spark of hope is to exile them from human memory. And in denying their humanity, we betray our own.

Perhaps faith, then, is a calling to join God in remembering. As we remember what it means to be made in the image of God we remember the most vulnerable. This act of mindfulness in the present is the foundation of everything we hope faith will do in the future. Wiesel concludes:

When adults wage war, children perish. We see their faces, their eyes. Do we hear their pleas? Do we feel their pain, their agony? Every minute one of them dies of disease, violence, famine.

Some of them—so many of them—could be saved.

“I will appoint a time,” says God.