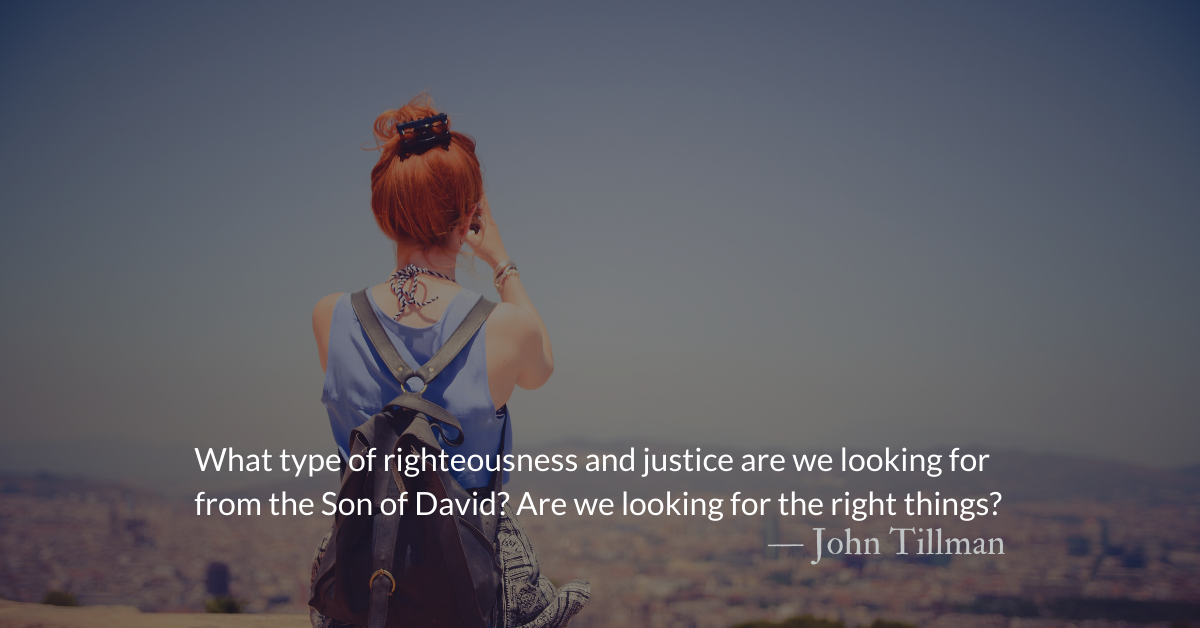 Missing the Son of David

Scripture Focus: 1 Chronicles 18.14
14 David reigned over all Israel, doing what was just and right for all his people.

Reflection: Missing the Son of David
By John Tillman

David is described as doing what is “just and right for all his people.” This does not mean that the author is in denial about David’s errors and human mistakes. The writer is speaking in generalities but is also speaking of David as a model of a ruler to come.

Soon, we will enter the season of Advent, in which we await the coming reign of the Son of David. Jesus is this ruler we are looking for. He will bring a kingdom with justice and righteousness for all his people.

We have written before about justice and righteousness. Justice, or mishpat, is the law being upheld. Righteousness, or sedeq, implies the actions that uphold it. At times, sedeq is even translated as “justice.” The accomplishment of justice is righteousness and righteousness accomplishes justice. To advocate for one and deny the other is like claiming fire is cold or ice is hot.

Many looked and longed for justice and righteousness that they believed would come with the Son of David. Many of those same people missed Jesus when he came. They were looking for something else.

As we read the gospels, we need to examine the descriptions Jesus gives of his kingdom. We have the benefit of hindsight. We can see what the religious leaders should have seen. As we notice their blind spots, we should think about our own.

Like the two blind men, and the foreign demoniac’s mother, let us call out to the Son of David to save us using this prayer based on our reading from James 5.1-6:

Make us generous so that no worker would cry against us…
And our lives would not be fattened with luxuries…
Make us a shield that covers the innocent…
Make us a sword that cuts free the oppressed…
Lord, clothe us in your righteousness…
May our footprints leave justice behind us.
May we be true Sons and Daughters of David.

Divine Hours Prayer: The Morning Psalm
The eyes of the Lord are upon the righteous, and his ears are open to their cry.
The face of the Lord is against those who do evil, to root out the remembrance of them from the earth.
The righteous cry, and the Lord hears them and delivers them from all their troubles.
The Lord is near to the brokenhearted and will save those whose spirits are crushed.
Many are the troubles of the righteous, but the Lord will deliver him out of them all.
He will keep safe all his bones; not one of them shall be broken. — Psalm 34.15-20

Read more about Justice to Wormwood
Justice is very much the business of people of faith and when people ignore it or frustrate it…God notices.

Read more about God’s Sufficient Justice
Being righteous before other humans is easy. We just have to be slightly less evil at heart than the next guy.