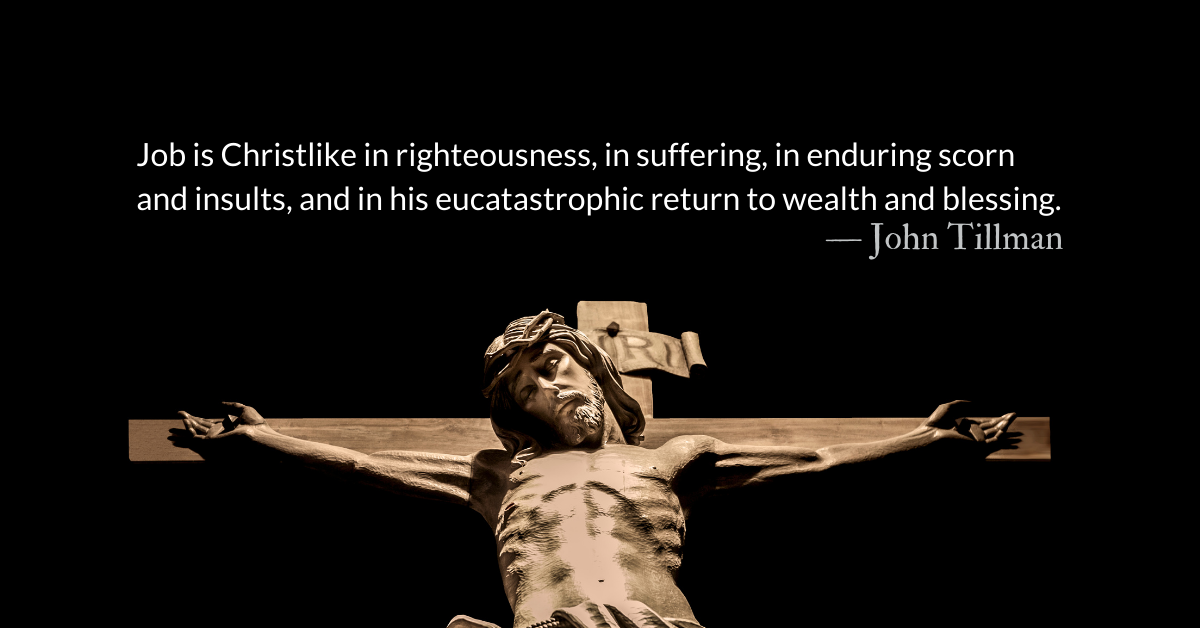 Scripture Focus: Job 42.8-12
8 So now take seven bulls and seven rams and go to my servant Job and sacrifice a burnt offering for yourselves. My servant Job will pray for you, and I will accept his prayer and not deal with you according to your folly. You have not spoken the truth about me, as my servant Job has.” 9 So Eliphaz the Temanite, Bildad the Shuhite and Zophar the Naamathite did what the Lord told them; and the Lord accepted Job’s prayer.
10 After Job had prayed for his friends, the Lord restored his fortunes and gave him twice as much as he had before. 11 All his brothers and sisters and everyone who had known him before came and ate with him in his house. They comforted and consoled him over all the trouble the Lord had brought on him, and each one gave him a piece of silver and a gold ring.
12 The Lord blessed the latter part of Job’s life more than the former part.

Job is an early “type” or example of Jesus. He demonstrates or proves God’s righteousness through suffering and death. Like Jesus, God calls Job his servant, saying he is pleased with him and Job’s friends are told to listen to him because Job tells “the truth” about God.

Job is Christlike in righteousness, in suffering, in enduring scorn and insults, and in his eucatastrophic return to wealth and blessing.

Job is Christlike in righteousness. Job is not completely righteous and sinless in the same way as Jesus. (In all of these categories, Job is only like Christ, not equal to him.) God never called Job an evildoer, as his friends did, but challenged him to work justice and crush evil. When Job describes righteousness, he refers to actions to set free captives and help the poor and downtrodden, as Jesus did.

Job is Christlike in suffering. Job lost the power and comforts his wealth and position gave him. Jesus chose suffering over heavenly power and poverty over riches, making himself nothing, in our likeness, obedient to death. Job did not choose this suffering. Jesus did.

Job is Christlike in enduring of scorn and insults. Reading Job sometimes feels like scrolling through the worst insults and scorn from social media. And these are Job’s friends! Jesus endured scorn on Good Friday from voices that sang “Blessed is He who comes in the name of the Lord” just a few days earlier. Jesus is the despised and rejected one.

Job is Christlike in his eucatastrophic return. God’s command prevented Satan from killing Job but everything else in Job’s life died or was lost. Then, unexpectedly, everything was restored. The second half of Job’s life was better than before. God’s command would not allow Jesus to “see corruption in the grave.” The resurrection is the ultimate eucatastrophe.

If we follow Jesus, we cannot be surprised to step into the same situations. We must step forward to enact justice and righteousness. We must step into suffering and endure scorn. We step through the valley of death, knowing that resurrection and miraculous recoveries are often just around the corner.

May pits of suffering not make us ashamed. May piles of blessings not make us complacent. Job used both for God’s glory. May we not waste opportunities to make ourselves like Christ. Like Job, may we be a type or model of Christ for our community.

Read more about Unexpected Victory
There is no one whose sufficient victory is more surprising than the eucatastrophe of the cross.