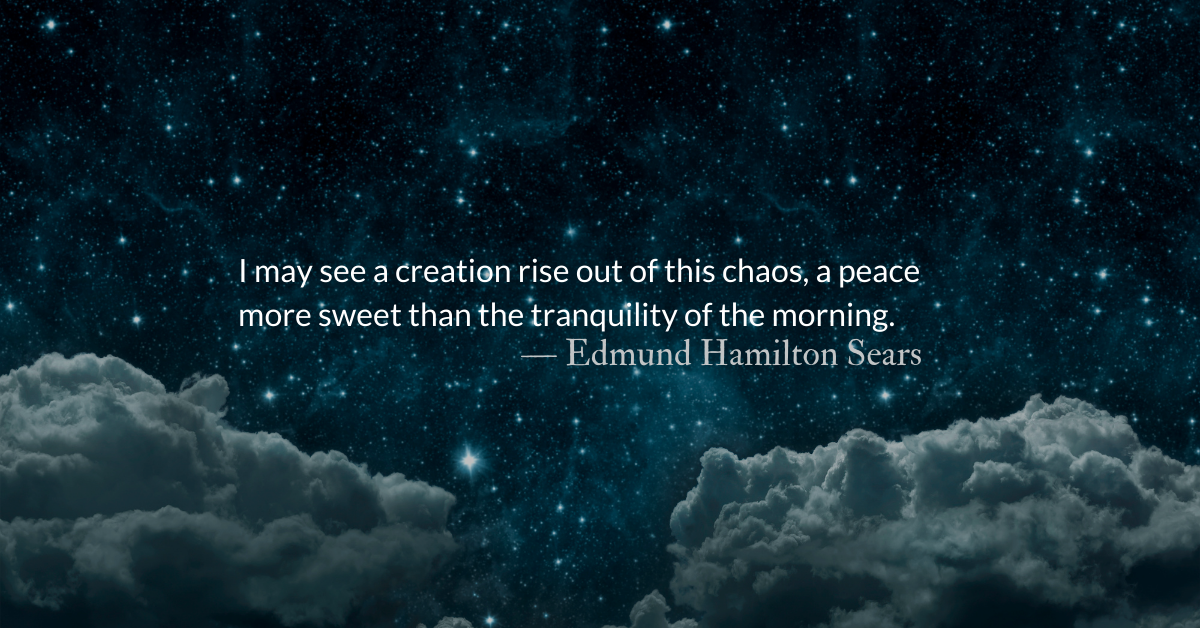 It Came Upon The Midnight Clear — Carols of Advent Peace

Scripture Focus: John 13.13-15
13 “You call me ‘Teacher’ and ‘Lord,’ and rightly so, for that is what I am. 14 Now that I, your Lord and Teacher, have washed your feet, you also should wash one another’s feet. 15 I have set you an example that you should do as I have done for you.

Luke 2.13-14
13 Suddenly a great company of the heavenly host appeared with the angel, praising God and saying,
14 “Glory to God in the highest heaven,
and on earth peace to those on whom his favor rests.”

Reflection: It Came Upon The Midnight Clear — Carols of Advent Peace
By Jon Polk

After graduating in 1837 from the Theological School in Cambridge, Massachusetts, Edmund Hamilton Sears settled in as pastor in the country town of Wayland. The church was impressed with his character and preaching and Sears, who never had ambitions for a prominent city congregation, was enamored by the quiet beauty of the little parish.

One can sense parochial tranquility in his most famous hymn.

It came upon the midnight clear,
That glorious song of old…

The world in solemn stillness lay,
To hear the angels sing.

Sears’ family would quickly grow to four children, compelling him to seek out a larger church which could support them. In 1840, he accepted the pastorate of a church in Lancaster, where he would serve for seven years.

The work in Lancaster was difficult and Sears suffered from illness, depression, and an eventual breakdown. Ultimately, his condition deteriorated to the point where he was unable to project his preaching voice loud enough for the congregation to hear.

To facilitate recovery, he returned to Wayland for a year of rest. When healthy, he was invited to return to the Wayland church part-time, which freed him to use his gifts in writing.

In the aftermath of his personal struggles, he wrote “It Came Upon the Midnight Clear,” in 1849. At the time, the U.S. was reeling from the Mexican War and struggling with slavery as the Civil War drew near.

His sadness is palpable in the lyrics.

And man, at war with man, hears not
The love-song which they bring…

Sears’ theology was passionately focused on Christ; he preached “The word ‘Jesus’ opens the heart and touches the place of tears.” He maintained that Christ alone had bridged the great divide between God and humanity.

As a result, he believed that we are responsible for implementing God’s peace in the world, consequently he preached for equality of women and men, opposing killing even in war, and against the evils of slavery.

This work towards peace is reflected in the carol’s hopeful ending.

When peace shall over all the earth
Its ancient splendors fling,
And the whole world give back the song
Which now the angels sing.

Following his life struggles, Sears managed to find his own peace and eventually a new purpose as a full-time writer. In his most read work, The Fourth Gospel: The Heart of Christ, he writes,

My consciousness at one time may give me an inward sense of moral ruin and disorder. I may see a creation rise out of this chaos… a peace more sweet than the tranquility of the morning… It comes not from inward beholdings of the Deity, but of what He does…

Listen: It Came Upon A Midnight Clear by Over the Rhine
Read: Lyrics at Hymnary.org

Divine Hours Prayer: The Request for Presence
Send our your light and your truth, that they may lead me, and bring me to your holy hill and to your dwelling;

Read more about End of Year Giving and Supporting our work
It is only through the support of our donors that we are able to continue this work. Consider joining them today.

Read more about From Silence, Peace :: Peace of Advent
The God who turned his back, came back. He came to speak peace to the people who had chosen death instead of life.