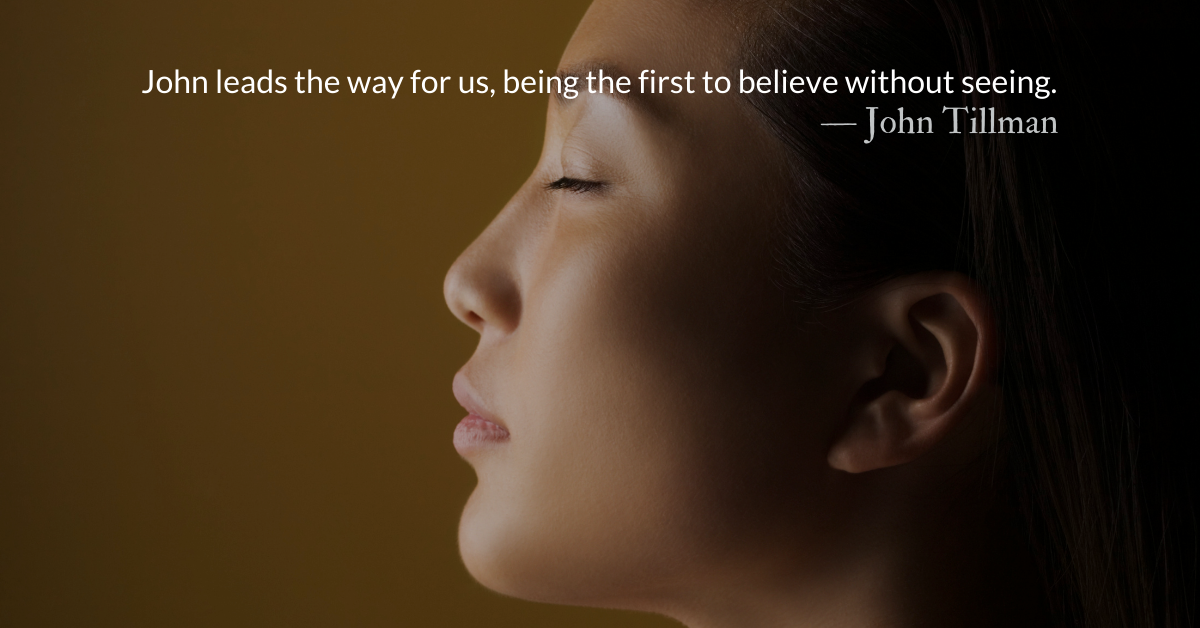 Scripture Focus: John 8.52-59
52 At this they exclaimed, “Now we know that you are demon-possessed! Abraham died and so did the prophets, yet you say that whoever obeys your word will never taste death. 53 Are you greater than our father Abraham? He died, and so did the prophets. Who do you think you are?”
54 Jesus replied, “If I glorify myself, my glory means nothing. My Father, whom you claim as your God, is the one who glorifies me. 55 Though you do not know him, I know him. If I said I did not, I would be a liar like you, but I do know him and obey his word. 56 Your father Abraham rejoiced at the thought of seeing my day; he saw it and was glad.”
57 “You are not yet fifty years old,” they said to him, “and you have seen Abraham!”
58 “Very truly I tell you,” Jesus answered, “before Abraham was born, I am!” 59 At this, they picked up stones to stone him, but Jesus hid himself, slipping away from the temple grounds.

John 20.3-9
3 So Peter and the other disciple started for the tomb. 4 Both were running, but the other disciple outran Peter and reached the tomb first. 5 He bent over and looked in at the strips of linen lying there but did not go in. 6 Then Simon Peter came along behind him and went straight into the tomb. He saw the strips of linen lying there, 7 as well as the cloth that had been wrapped around Jesus’ head. The cloth was still lying in its place, separate from the linen. 8 Finally the other disciple, who had reached the tomb first, also went inside. He saw and believed. 9 (They still did not understand from Scripture that Jesus had to rise from the dead.)

From John: We are closing out this Easter week by looking back at two significant post-resurrection appearances of Jesus. One can’t read John’s gospel and come away thinking, “Jesus was a nice moral teacher. Too bad he died.” The passage from John 8 emphasizes that. John highlights claims that would make Jesus a lunatic or a liar specifically to encourage us to call him Lord. John also emphasizes that people can, do, and will believe in Jesus without seeing him.

After appearing first to the women and specifically to Mary Magdalene, Jesus appears to Peter, to Cleopas and an unnamed disciple on the Emmaus road, then he appears to some of the gathered disciples, and then again to the group of disciples when Thomas joins them. As far as we know, John did not see Jesus in the flesh until the first appearance of Jesus to the gathered disciples in the upper room.

John leads the way for us, being the first to believe without seeing. As Jesus tells Thomas, “Blessed are those who have not seen and yet have believed..” (John 20.29)

Divine Hours Prayer: A Reading
He was still speaking to the crowds when suddenly his mother and his brothers were standing outside and were anxious to have a word with him. But to the man who told him this Jesus replied, “Who is my mother? Who are my brothers? Anyone who does the will of my Father in heaven is my brother and sister and mother.” — Matthew 12.46-50

Read more about Ladies First—Resurrection Appearances
“Firsts” are important in the scriptures. So we cannot imagine that it is a coincidence or a mistake that Jesus appears first to the women.

Read more about No Sigh Big Enough
Jesus often may not give us “signs” we might expect. There’s no sign big enough to ensure faith.