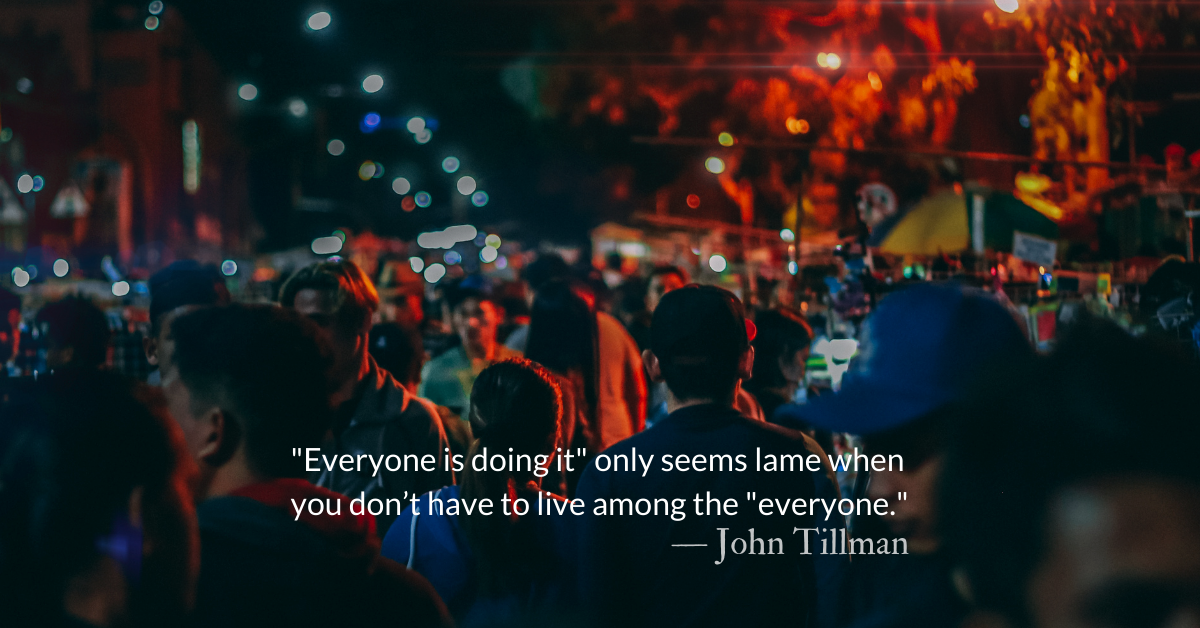 “Everyone Is Doing It”

Scripture Focus: 2 Kings 17.22-23, 26-29, 33, 40-41
22 The Israelites persisted in all the sins of Jeroboam and did not turn away from them 23 until the Lord removed them from his presence, as he had warned through all his servants the prophets. So the people of Israel were taken from their homeland into exile in Assyria…

26 It was reported to the king of Assyria: “The people you deported and resettled in the towns of Samaria do not know what the god of that country requires. He has sent lions among them, which are killing them off, because the people do not know what he requires.” 27 Then the king of Assyria gave this order: “Have one of the priests you took captive from Samaria go back to live there and teach the people what the god of the land requires.” 28 So one of the priests who had been exiled from Samaria came to live in Bethel and taught them how to worship the Lord.
29 Nevertheless, each national group made its own gods…

33 They worshiped the Lord, but they also served their own gods in accordance with the customs of the nations from which they had been brought.

40 They would not listen, however, but persisted in their former practices. 41 Even while these people were worshiping the Lord, they were serving their idols. To this day their children and grandchildren continue to do as their ancestors did.

Reflection: “Everyone Is Doing It”
By John Tillman

Israel failed to bless the nations by teaching them to follow Yahweh, following their gods instead. After Israel’s exile, we see the nations literally brought into the promised land and taught, by imperial decree, to worship him.

The non-Israelite settlers were being killed by lions due to not worshiping Yahweh. So Assyria sent back an exiled priest tasked with teaching the people “what the god of the land requires.” This priest was only partially successful. “Even to this day,” the author says, the people continued mixing the worship of God with that of idols.

It can be easy for us to shake our heads in judgment at ancient idolaters. “How simple and foolish they are,” we may think. We underestimate the impact of cultural influence.

We find it easy to not worship a fertility god who guarantees good crops because we aren’t farmers living in a culture in which everyone around us is doing it. (Instead, we live in a culture that believes “knowledge is power” and we are all addicted to streams of content, articles, feeds, news channels… “Everyone is doing it.”)

We underestimate the cultural influence that we are under. Those baked in the culture of western Christianity THINK that we are operating from a neutral theological and cultural position but our culture’s yeast is worked all through our dough. Our culture has a huge influence on our theology and the way we live out our faith. It is hubris to think otherwise.

Why do we worship God? So that we may not fall prey to lions? So that our kings may not be conquered? So that we can dwell in the land in peace? Selfishness and power can’t grow faith.

Assyria conquered the land but couldn’t enforce worship. We also will fail to force others to faith. Faith cannot be crushed, no matter how powerful the government, but it can’t be forced either. It must grow on its own. All we can do is plant seeds like the priest and pray that God will make them grow.

Divine Hours Prayer: A Reading
Jesus went on to say, “What is the kingdom of God like? What shall I compare it with? It is like a mustard seed which a man took and threw into his garden: it grew and became a tree, and the birds of the air sheltered in its branches.” — Luke 13.18-19

Read more about Paul’s Stance on Gentleness
May we tear down arguments and strongholds, but never people for whom Christ died.