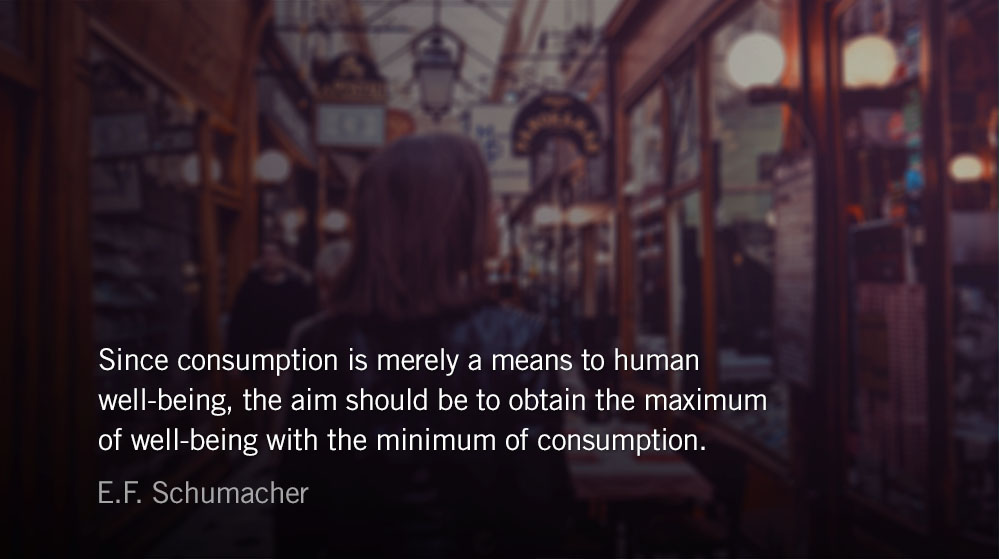 No one is really working for peace unless he is working primarily for the restoration of wisdom.

My soul clings to the dust; give me life according to your word!

In his book Small is Beautiful: Economics as if People Mattered, British economist E.F. Schumacher observes that the modern Western economist “is used to measuring the ‘standard of living’ by the amount of annual consumption, assuming all the time that a man who consumes more is ‘better off’ than a man who consumes less.”

Schumacher’s work, published during the 1973 oil crisis, reads like a manifesto against industrialism’s “bigger is better” mantra. “Since consumption is merely a means to human well-being, the aim should be to obtain the maximum of well-being with the minimum of consumption.”

The ownership and the consumption of goods is a means to an end, and Buddhist economics is the systematic study of how to attain given ends with the minimum means.

Much of what Schumacher offers as a critique of western economics is engaging, if not refreshing. His solution of Buddhist economics is intriguing as well, but he places near-utopian hope in humankind (assuming we can figure out economics):

People who live in highly self-sufficient local communities are less likely to get involved in large-scale violence than people whose existence depends on worldwide systems of trade.

The idea of Christians thoughtfully engaging faith in economics is a deeply biblical response to our call to cultivate. That image comes with the assumption that everything in creation, as significant and beautiful as it may be, is dust. Trying to solve humankind’s problems through dust is a smokescreen to hide our true actions of substituting God with ourselves.

One of the privileges of the Christian life is responding to the glory of God’s word while we drive it deep into our hearts through prayer. This posture reorients our understanding and deepens our calling to engage thoughtfully with economic theory and practice while we simultaneously set our eyes on Christ as the greatest hope of the world.

Mercy and truth have met together; righteousness and peace have kissed each other. —Psalm 85.10