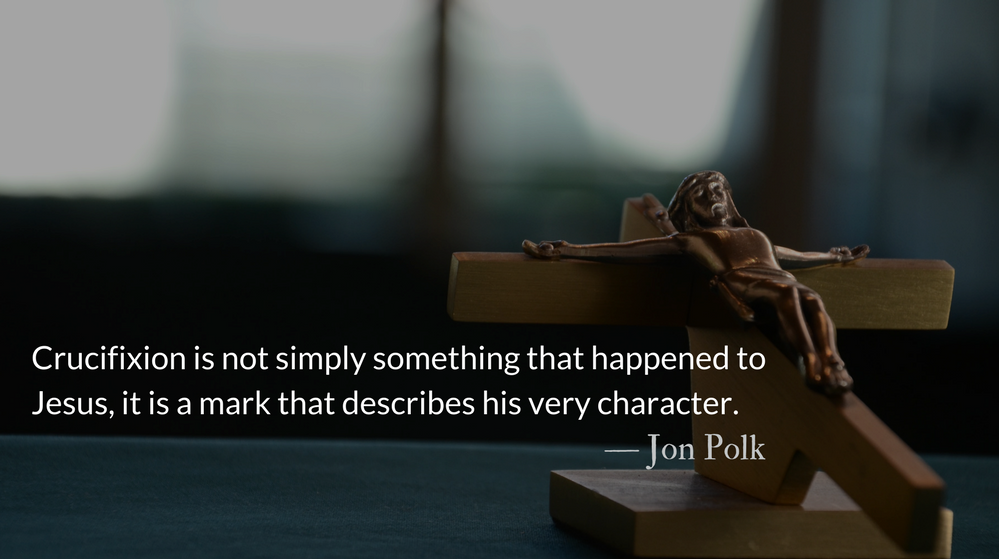 Foolishness. That’s right, complete, utter foolishness. It is hard for us to grasp how foolish, offensive and shameful crucifixion was in the ancient world. The cross itself has become such a centerpiece in our churches, a sanitized symbol of our faith, that it is easy for us to forget what an unfathomable notion it would have been for Jesus to be crucified.

Crucifixion was regarded by Roman society as brutal, disgusting and abhorrent, reserved for convicted slaves, terrorists and egregious criminals. It could never be imposed on a Roman citizen, it was never used as punishment for more “respectable” crimes, and it was never mentioned in polite conversation because it was so offensive.

When we preach Christ crucified, we are not telling a story of how Christ died, but we tell the story of a crucified Christ, our Liberating King put to death as a criminal in the most disturbing way possible. To preach a crucified Christ is to proclaim a King whose very nature is wrapped up in sacrifice. Crucifixion is not simply something that happened to Jesus, it is a mark that describes his very character. Even in his resurrected and glorified body, Jesus still bears the marks of his crucifixion.

Some may ask why Jesus had to die. The answer is a clarification: Jesus did not have to die, he chose to die. Surely God could have chosen any number of ways to rescue and redeem humanity that did not involve the death of his Son. But he didn’t. He chose death. He chose self-sacrifice.

Regarding this passage, Martin Luther writes:

For since, in the wisdom of God, the world did not know God through wisdom, it pleased God through the folly of what we preach to save those who believe. Now it is not sufficient for anyone, and it does him no good to recognize God in his glory and majesty, unless he recognizes him in the humility and shame of the cross. Thus God destroys the wisdom of the wise. For this reason true theology and recognition of God are in the crucified Christ.

Editor’s Note:
Across the world on this day, the church celebrates Ash Wednesday and begins the period of fasting and introspection called Lent. On this day many believers receive a cross, rubbed on the forehead using ashes from last year’s Palm Sunday. Upon receiving the cross, many are instructed to, “Repent, and believe in the Gospel”.

May each of us keep the offensive and brutal cross at the front of our minds, not only today but each day. May we be daily marked with the shame of Christ’s cross and the power of his Gospel.  —  John

The Refrain for the Morning Lessons
The same stone that the builders rejected has become the chief cornerstone. — Psalm 118.22