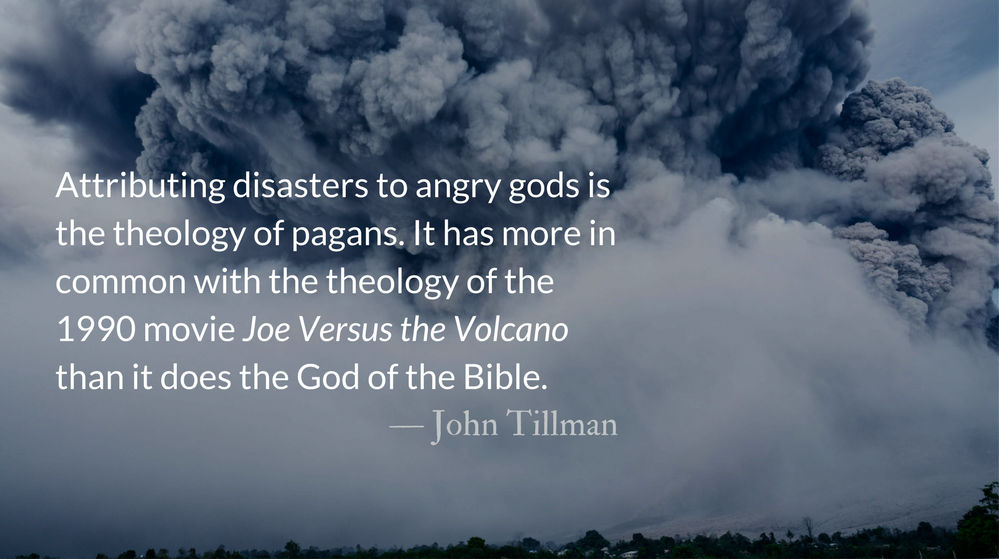 Scripture: 1 Kings 22:23
“So now the Lord has put a deceiving spirit in the mouths of all these prophets of yours. The Lord has decreed disaster for you.”

1 Thessalonians 5:9
For God did not appoint us to suffer wrath but to receive salvation through our Lord Jesus Christ.

Attributing disasters to angry gods is the theology of pagans. It is often a theological attack with a two-pronged, double dip of blame. Blaming the angry god is mere pretext to the true source of blame—the person or people who angered that god. The true source of blame in this view is human action and the true purpose of this kind of prophecy is to attack people with whom one disagrees. This theology has more in common with the theology of the 1990 movie Joe Versus the Volcano than it does the God of the Bible.

Unfortunately there are no shortage of Christians and Christian leaders who willingly share this theological ground with pagans. They can be found on news programs after a disaster, describing a distant, impersonal, yet somehow still moralistic god, who is vengefully punishing moral sins.

The idea that a country may be punished by God for its sins is not unbiblical. The God of scripture does use natural disasters and disastrous attacks by armies (or even wild animals) as judgment on the sin of individuals, leaders, and nations. However, on occasions in which God did so, he announced it ahead of time—with extraordinary specificity. Many times an opportunity for repentance was given by the prophet. Even odious leaders such as Ahab were given opportunities to repent and avoid judgment.

It would be wise for any current day prophets wishing to make some prophecy of God’s judgment to also keep in mind the penalty for false prophecies and instead simply cover their mouths.

The God of the Old Testament is the the same God-in-the-flesh we know in the person of Jesus Christ, and the same Holy Spirit at work within us and through us. Justice is wrought by God’s love for us. His wrath is borne by His own self-sacrifice for us. The disaster that should strike us, He caused to strike Christ in our place.

As Paul says, we are not to treat prophecies with contempt, but test them all — holding on to what is good and rejecting evil. And it would help if we remembered that true prophecy comes before disaster, not after.

Refrain for the Morning Lessons
Let not those who hope in you be put to shame through me, Lord God of hosts; let not those who seek you be disgraced because of me, O God of Israel. — Psalm 69:7