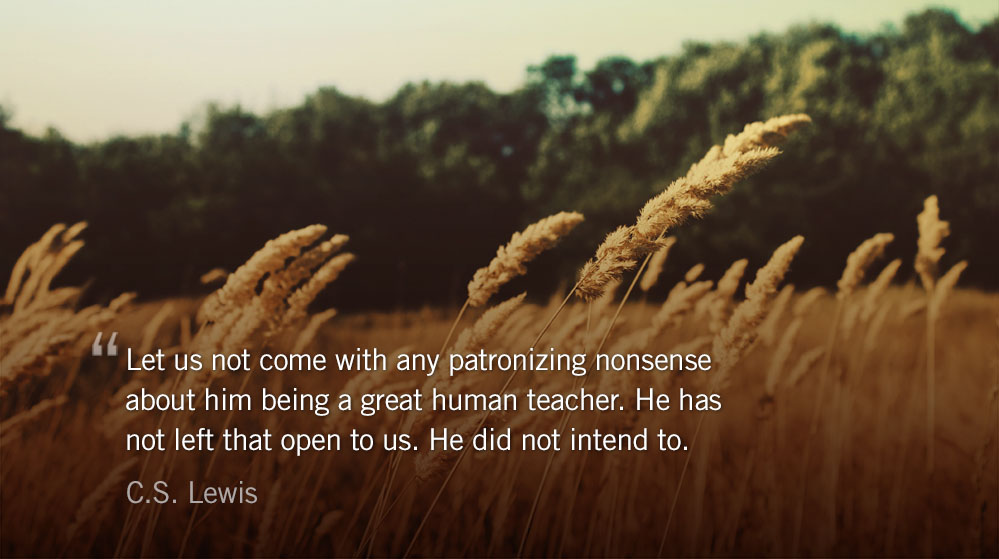 Colossians 2.6-7
Therefore, as you received Christ Jesus the Lord, so walk in him, rooted and built up in him and established in the faith, just as you were taught, abounding in thanksgiving.

I am trying here to prevent anyone saying the really foolish thing that people often say about Him: I’m ready to accept Jesus as a great moral teacher, but I don’t accept his claim to be God. That is the one thing we must not say. — C.S. Lewis

The words, Christ, Jesus, and Lord, in Colossians 2, were written with the intention of provocation.

To the ancient Jewish elite, accepting Christ in the person of Jesus demanded a radical reorientation of how they understood faith.

To the Docetists, believing in Jesus as a man required an intellectual transformation. (They denied God would humble himself to the nature of a man, a view deemed heretical at Constantinople in 325 C.E.)

To the the secularists, submitting to Jesus as Lord — the one who holds authority over heaven and earth — would confront their illusion of control over their own lives.

Although the names of the groups have changed in today’s world, many of the confrontations of choosing Christ remain the same.

Though it is fairly palatable to accept Jesus as a man, or even an inspiring moral teacher, choosing him as Christ and Lord comes at a cost — socially, professionally, and otherwise. The path of least resistance is to settle for inspiration while maintaining functional control over our own heart, mind, and strength.

A man who was merely a man and said the sort of things Jesus said would not be a great moral teacher. He would either be a lunatic — on the level with the man who says he is a poached egg — or else he would be the Devil of Hell.

You must make your choice. Either this man was, and is, the Son of God, or else a madman or something worse. You can shut him up for a fool, you can spit at him and kill him as a demon or you can fall at his feet and call him Lord and God, but let us not come with any patronizing nonsense about his being a great human teacher. He has not left that open to us. He did not intend to.

This confrontation is not without an invitation, however. In accepting Jesus as Christ, our Lord, we find the richness and full depth of the human experience — a reality the rest of Colossians 2 explores in depth.