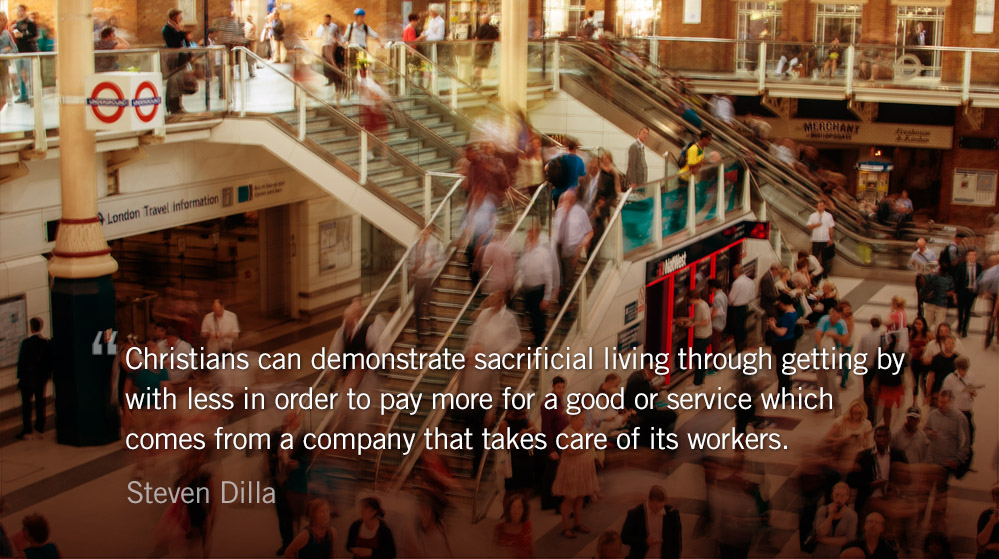 “The basics of the production transformation are increasingly evident; the consequences are much harder to estimate.” — John Zysman

We no longer find it odd to download and tap squares on the screens of our phones in order to purchase the services of other human beings. Whether it’s a meal, homemade good, ride, flight, place to stay or any number of mundane tasks, people ready to help are just a simple icon press away.

Naturally we prefer for our longings to be satiated at the lowest possible cost.
This exerts extraordinary pressure on services providers to keep wages low and shift the risks of doing business onto their workers (many of whom are not employees with benefits and legal protections, but contractors). The gig-economy, which could benefit many, winds up devolving into a low-wage-labor economy. Ultimately the myopic focus on price devalues workers.

The race to the bottom, in the pricing of goods and services, is powered by dehumanized consumption.

“Many peer economy platforms are asset-based. When the primary purpose of a transaction is access to an asset, the value of skills is deemphasized,” observes MIT Researcher Denise Cheng. In Barriers to Growth in the Sharing Economy she continues:

“Everyday people just like you perform tasks and services, and this peer-to-peer commerce creates human connection. However, between price consciousness and a multitude of options for the same service, the service’s human-centered proposition is secondary to consumers.”

How can Christians respond and live out our faith in such a world?
I’ve written before about the tendency toward narcissism for those of us affluent enough to purchase the services of another person by tapping a square.

There is also a massive ministry opportunity in caring for and protecting the service-providers in our new world. The gig-economy exists largely beyond current economic policies. Its workers are often taken advantage of by consumers working aggressively to save money.

“The current reality is that most people do not become independent contractors because they want to, but because they need to,” Cheng says. “The peer economy workforce has not yet hit its saturation point. When it does, services on some platforms may become even more commodified, which would affect the earning potential of providers.”

The first ministry opportunity is to take what is otherwise a transaction and turn it into an interaction.
We re-humanize the process when we seek understanding of the person to whom we are talking. Are they participating in the gig economy as a casual user to generate supplemental income? Or are they, in Cheng’s words, “independents [who] have no choice but to cobble together a piecemeal income” from a number of apps, gigs, and odd jobs?

Cheaper isn’t always better — theologically speaking. Because human beings are created in the image of God, any good or service that strips another person of their dignity is, by nature, sinful.

Live with less, be willing to pay more.

Christians can also demonstrate sacrificial living through getting by with less in order to pay more for a good or service which comes from a company that takes care of its workers. “In large measure, the current struggle is around efforts to escape what we call ‘the commodity trap.’” John Zysman clarifies in Where Will Work Come From In The Era of the Cloud and Big Data.

The pressure to deliver cheaper — partially in response to dehumanized consumerism — is intense. Zysman concludes, “A diverse array of competitors use widely available conventional technologies to generate roughly similar standard goods, components, and services. The resulting intense competition leads to commoditization, meaning competition based principally on price. The consequence of this commodity trap is intense pressure on wages and profit margins alike.”

The gig-economy will continue to grow aggressively in the next two decades. The Church will grow with it as we Christians in a consumeristic society are able to sacrificially love our neighbors, provide for the marginalized, and live in our world but not of it.