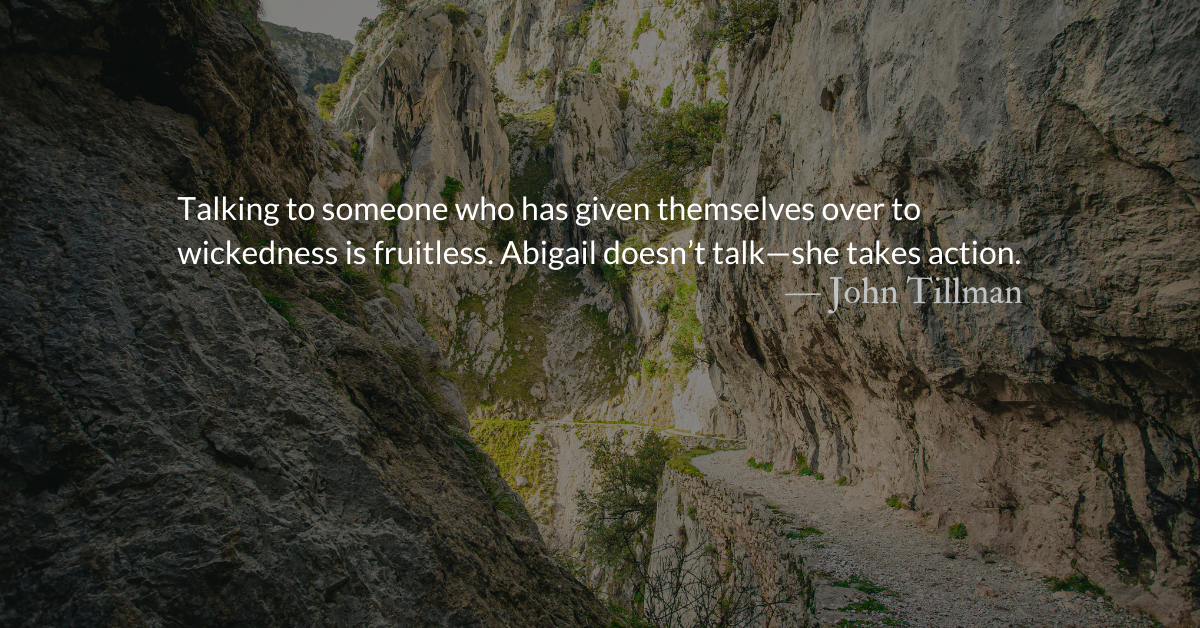 Blocking the Way of Wickedness

Scripture Focus: 1 Samuel 25.17, 24-31
17 Now think it over and see what you can do, because disaster is hanging over our master and his whole household. He is such a wicked man that no one can talk to him.”

24 …”Pardon your servant, my lord, and let me speak to you; hear what your servant has to say. 25 Please pay no attention, my lord, to that wicked man Nabal. He is just like his name—his name means Fool, and folly goes with him. And as for me, your servant, I did not see the men my lord sent. 26 And now, my lord, as surely as the Lord your God lives and as you live, since the Lord has kept you from bloodshed and from avenging yourself with your own hands, may your enemies and all who are intent on harming my lord be like Nabal. 27 And let this gift, which your servant has brought to my lord, be given to the men who follow you.
28 “Please forgive your servant’s presumption. The Lord your God will certainly make a lasting dynasty for my lord, because you fight the Lord’s battles, and no wrongdoing will be found in you as long as you live. 29 Even though someone is pursuing you to take your life, the life of my lord will be bound securely in the bundle of the living by the Lord your God, but the lives of your enemies he will hurl away as from the pocket of a sling. 30 When the Lord has fulfilled for my lord every good thing he promised concerning him and has appointed him ruler over Israel, 31 my lord will not have on his conscience the staggering burden of needless bloodshed or of having avenged himself. And when the Lord your God has brought my lord success, remember your servant.”

Reflection: Blocking the Way of Wickedness
By John Tillman

We don’t always have a choice about working with or living among wicked people, but we can choose how we respond.

Even in our modern world, it can be difficult to confront or leave a wicked spouse or partner. For Abigail, and other women of her time, it was unthinkable. Abigail and her servants lived under the authority of her husband, Nabal, whose name meant “foolish.” (verse 25) He was also called “wicked” by the servant. (A bold statement from a servant about his master!) This word implies “worthlessness” and “destruction” as opposed to value and blessing. The servant’s usage implies that Nabal cannot be reasoned with.

Agreeing with the servant, she does not speak to Nabal. Talking to someone who has given themselves over to wickedness is fruitless. Abigail doesn’t talk—she takes action. She does not waste the pearls of her wisdom on her swine of a husband. Rather than face him, she sets out to greet 400 angry men with swords.

In conflicts between the powerful, the powerless get crushed. Had Abigail done nothing, it is possible she would have survived, and even ended up married to David as a result. But the servants, and perhaps many others, would have died. Not only would David have had blood on his hands, she would as well.

She went out into the night, to meet angry, armed men, taking with her restitution, humility, an apology, and wisdom about what kind of leader David should strive to be. Her speech to David shows she is well connected and knows much of David. She even subtly references his victory over Goliath with a metaphor about a sling. (verse 29)

Nabal is wicked and cannot listen to reason. David, even when set on a destructive course, still listens to those standing in his way.

There are two godly examples for us to follow in this passage.

May we remember to be like Abigail, willing to risk our lives to block the way of wickedness, paying the cost of the wrongs done by others and standing in the way of those intent on harm and violence.
May we also be like David, willing to listen to those who stand in our way, warning us that we are on the wrong path. May we be willing to let go of our own anger and vengefulness.

Divine Hours Prayer: The Call to Prayer
My mouth shall speak the praise of the Lord; let all flesh bless his holy Name forever and ever. — Psalm 145.22

Read more about What David Longed For
David makes a contrast between the evildoers whose satisfaction is found in this life, and himself.

Read more about Limits of Human Grace
David, when dealing with these offenders, had seemed magnanimous…But on his deathbed, David sounded vindictive.