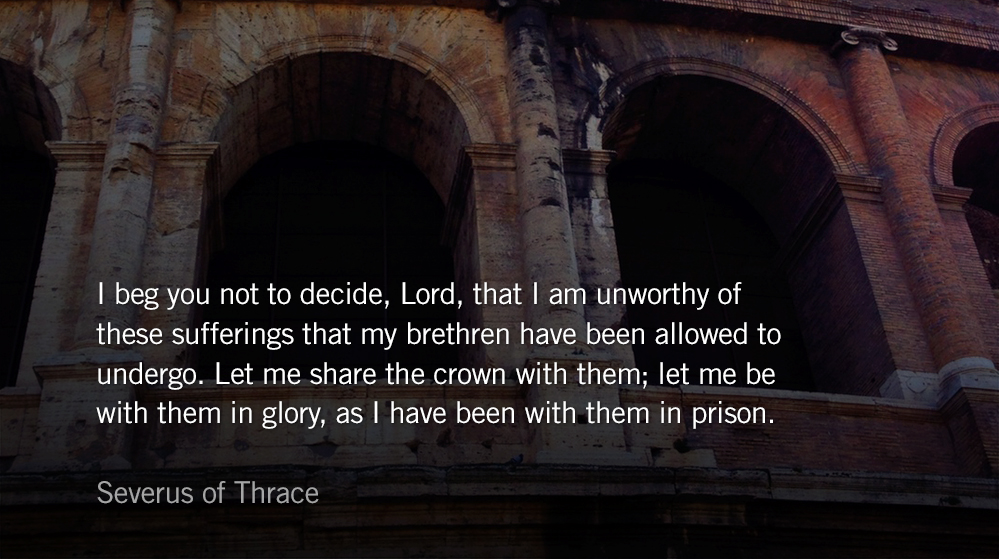 A Prayer for the Hurting :: Readers’ Choice

I’ve kept this one handy to read and re-read, each time bringing me to tears—partly because it reminds me of God’s mighty hand and outstretched arm toward His people in tough times and partly because He has allowed me to be one of His people. I never want to stop being amazed at how God takes the very worst and makes it into something so much greater and more beautiful than we could ever imagine. — Sam

By Severus of Thrace

Now I rejoice in my sufferings for your sake, and in my flesh I am filling up what is lacking in Christ’s afflictions for the sake of his body, that is, the church. — Colossians 1:24

*Editor’s note: Severus was a priest in third-century Greece. Variations of this prayer are believed to have been used by the priest himself, and many who followed him, in preparation for martyrdom.

To all who are tossed by the waves, you are the calm of the harbor; you are the hope of the hopeful. You are the health of the sick, you relieve the needy and guide the blind. To those exposed to punishment on every count, you are merciful; to the weary, a wall; in darkness, light.

You created the land, you rule the sea, you set every element in its place; a word from you and the heavens, the stars, and all else was made, and made perfect.

You kept Noah safe and gave wealth to Abraham, let Isaac go free and provided a victim in his stead, wrestled with Jacob, to his sweet confusion, took Lot away from the accursed land of Sodom.

Moses you let see you; to Joshua, son of Nun, you gave prudence.

In your mercy you went with Joseph on his way and brought your people out of the land of Egypt, leading them to the land they had been promised. You protected the three children in the furnace: your dew—Majesty—flowed over them and the flames could not touch them.

You did not allow Jonah to perish in the depths of the see and when the cruel sea-beast caught him in its jaws, you let him escape unhurt.

You gave Judith the weapons she needed; Susanna you saved from the unjust judges.

Esther had her triumph from you; you procured the downfall of Haman. You brought us from darkness to eternal light, Father of our Lord and Savior Jesus Christ, light yourself unquenchable, you who gave me the sign of the cross, the sign of Christ.

I beg you not to decide, Lord, that I am unworthy of these sufferings that my brethren have been allowed to undergo. Let me share the crown with them; let me be with them in glory, as I have been with them in prison. Let me rest with them, as I have confessed your glorious name with them.