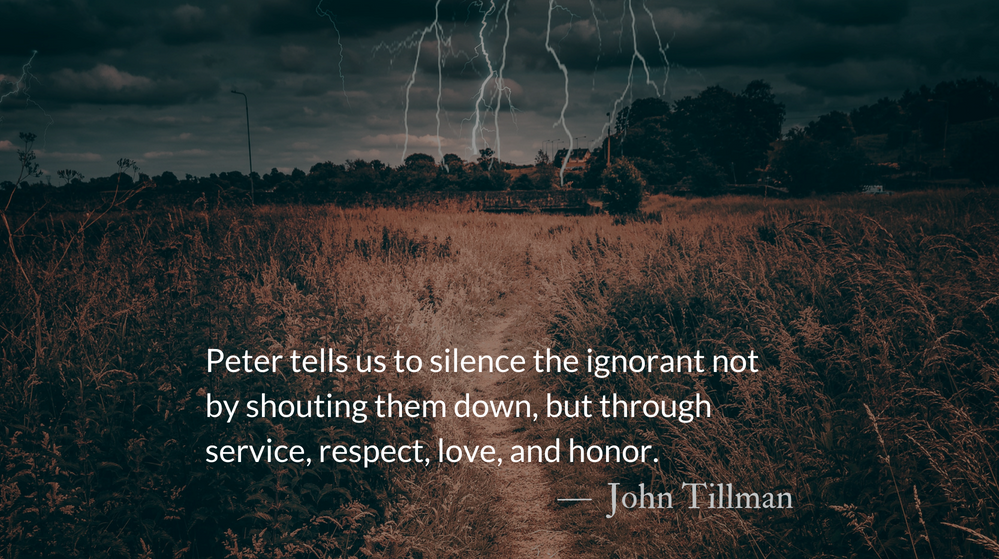 A Different Kind of Exile

Scripture: 1 Peter 2.15-17
For it is God’s will that by doing good you should silence the ignorant talk of foolish people. Live as free people, but do not use your freedom as a cover-up for evil; live as God’s slaves. Show proper respect to everyone, love the family of believers, fear God, honor the emperor.

Reflection: A Different Kind of Exile
By John Tillman

In 1 Peter 2, we see that the scattered exiles from Jerusalem must live in submission to masters, whether harsh or kind. Their lives—their good deeds—are literally the arguments they are to defend themselves with.

In Isaiah, we see a different message to the soon to be exiled. It is a taunt for their enemies to be used in the distant future after the current hearers are long dead and a future generation is restored.

But as Christians go into exile in the rising anti-Christian culture, we don’t seem to be willing to serve our oppressors in love. We want to taunt them now, not later.

As the exiled people of God, Peter tells us to silence the ignorant not by shouting them down, but through service, respect, love, and honor.

Peter encourages his exiles not to allow the oppression and suffering they are going through to be something that crushes their faith. Instead they are to allow the weight of their suffering to press them deeper into the footprints of Jesus Christ who has walked the path of suffering before us.

Peter’s words about living in a pagan society have always been applicable, but they seem especially appropriate to our times. Most people who don’t accept Christianity aren’t concerned with our theology. They are concerned by our actions.

In this world, we are cast out. In the renewed world we will be brought in. May that day come soon. And may we bring many following behind us.

Prayer: The Small Verse
Keep me, Lord, as the apple of your eye and carry me under the shadow of your wings. — Psalm 17.8