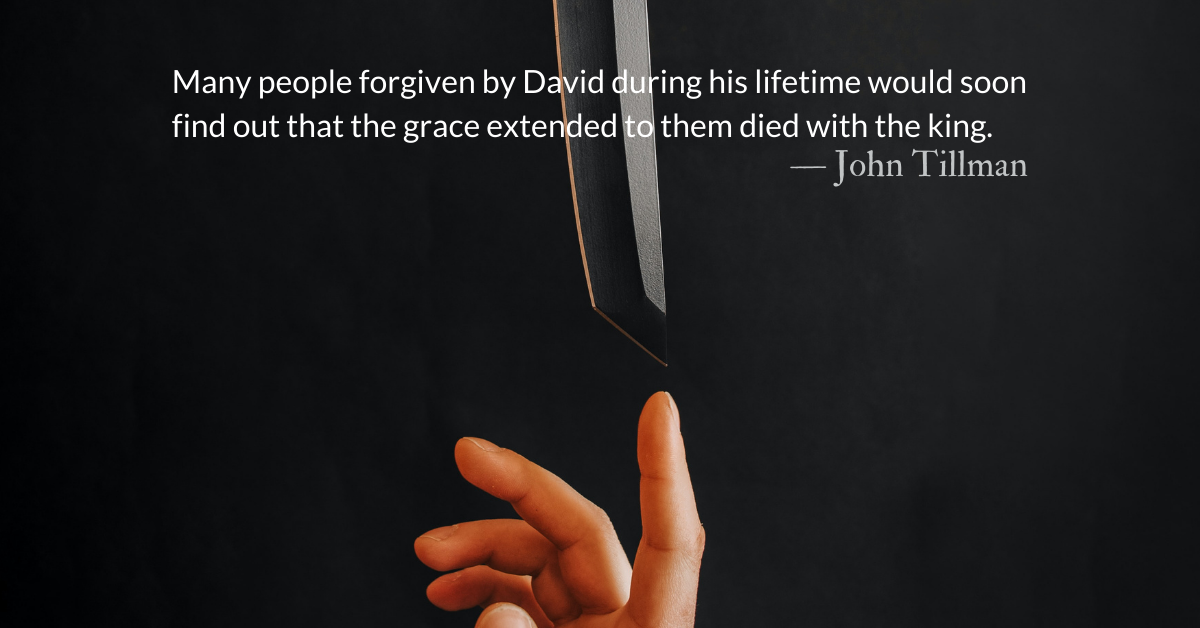 When Grace Surrenders to Self-Protection

Scripture Focus: 1 Kings 2.8-9
8 “‘When he came down to meet me at the Jordan, I swore to him by the Lord: ‘I will not put you to death by the sword.’ 9 But now, do not consider him innocent. You are a man of wisdom; you will know what to do to him. Bring his gray head down to the grave in blood.”

Reflection: When Grace Surrenders to Self-Protection
By John Tillman

Many parents leave their children valuable possessions and wisdom. Some leave only bad debts and inherited controversies. David left Solomon a mix of things, including a hit list of enemies to wipe out.

David’s final instructions to Solomon show us the limits of David’s human grace. In the past few chapters, David has seemed magnanimous, humble, forgiving, and gracious, however, his deathbed speech sounds hurt, petty, vindictive. Many people forgiven by David during his lifetime would soon find out that the grace extended to them died with the king.

There were good and practical reasons for David’s hit list. David was being protective. Solomon was young and would be seen as weak. He was not the oldest son, and by legal tradition was ineligible to inherit. He was also a child of controversy. David took Solomon’s mother, Bathsheba, as his wife after the state-sanctioned murder of her husband.

Solomon would become renowned for wisdom, but the first signs of his wisdom were his shrewd arrangements of the murders advised by his father. Where Joab made politically necessary murders without David’s explicit approval, Solomon gave Benaiah direct orders for all three of these killings. Adonijah, Joab, and Shimei all fell to Solomon’s sword.

Practicality and self-preservation don’t automatically lead to good things. These kinds of things often earn a rebuke from Christ.
Peter striking and taking off the ear of Malchus was protective.
The disciples’ concern about not having bread in the boat was reasonable.
The marketplace set up in the Temple was practical.

Are we more like David or like Christ? Do we have human, David-like grace? Or do we have divine, Jesus-like grace?

The grace of king David died with him.
The grace of Christ lives on with him. It should also live on within us.

May we learn to extend Christ’s undying grace past the limits of our own.

Divine Hours Prayer: The Refrain for the Morning Lessons
Blessed are they which do hunger and thirst after righteousness; for they shall be filled. — Matthew 5:6

Read more about Grasping for Mercy
We reach out to grasp the edges of mercy. Through Jesus, forgiveness is at our fingertips..through Christ, we are healed by faith