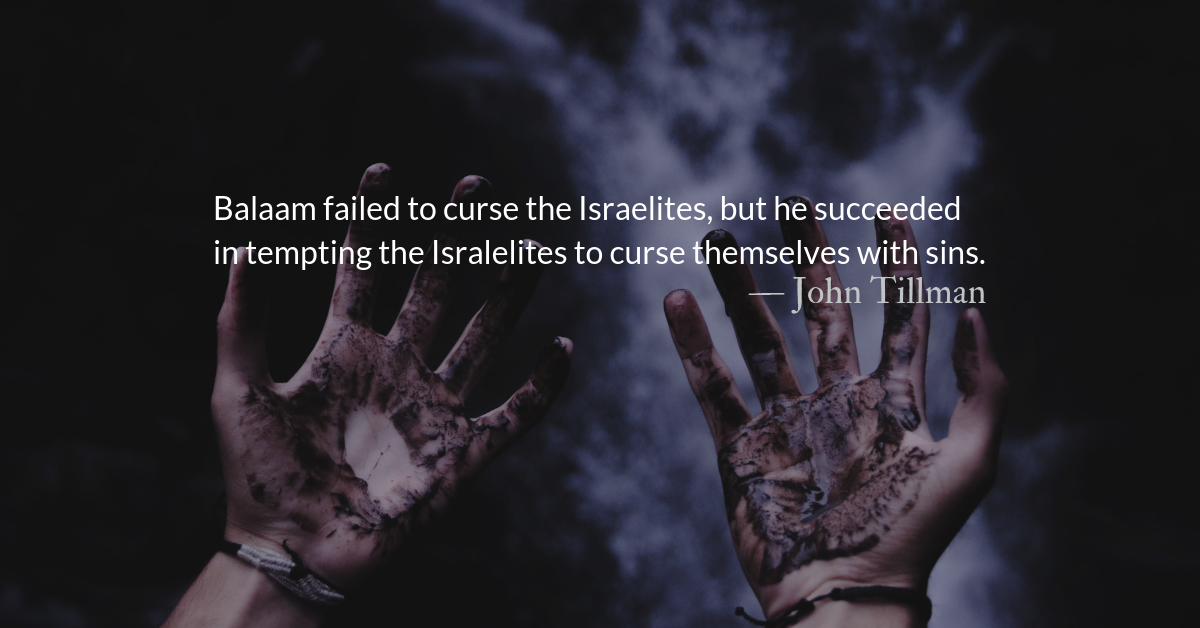 Numbers 24.10-14
“I summoned you to curse my enemies, but you have blessed them these three times….I said I would reward you handsomely, but the Lord has kept you from being rewarded.”

Balaam answered Balak, “Did I not tell the messengers you sent me, ‘Even if Balak gave me all the silver and gold in his palace, I could not do anything of my own accord, good or bad, to go beyond the command of the Lord—and I must say only what the Lord says’? Now I am going back to my people, but come, let me warn you of what this people will do to your people in days to come.”

Psalm 66.16-19
Come and hear, all you who fear God;
let me tell you what he has done for me.
I cried out to him with my mouth;
his praise was on my tongue.
If I had cherished sin in my heart,
the Lord would not have listened;
but God has surely listened
and has heard my prayer.

If all one ever read of Balaam was Numbers 22-24, one might think of him as a somewhat unwilling prophet. After all, he blesses Israel three times, rather than curse them as he was hired to do. In doing this he angers Balak and Balak cancels his planned payment. If we aren’t careful, we could mistake Balaam for someone who, in the end, honorably delivered God’s message despite relational and financial loss.

One could attempt to make a comparison to Jonah. Like Jonah, Balaam attempts to do the opposite of what God commands. Both prophets’ travels get interrupted by a life threatening event. Jonah and Balaam both have a miraculous intervention by an animal. Balaam is run off the road three times. Jonah is in the belly of the fish for three days. Jonah is reluctant to see God’s message accepted. Balaam is reluctant to give up his attempts to curse Israel. But the comparison falls flat.

The rest of scripture makes it clear that Balaam did nothing honorably. Multiple scriptures testify that God, through his power, overcame what Balaam attempted. Balaam never gave up helping Balak to defeat and destroy Israel. Although Balak dismisses Balaam without payment in this chapter, it is clear from the rest of scripture that their prophet-for-hire relationship was maintained.

Every other mention of Balaam remarks on either his deception of the Israelites or his attempts at monetary gain by betraying them.

Balaam failed to curse the Israelites, but he succeeded in tempting the Israelites to curse themselves with sins. Balaam’s strategy of people-pleasing pandering to powerful politicians is still alive today. So are his methods of deceit and temptation.

The Israelites’ culture was most susceptible to the sexual temptations of ancient fertility cults, In our culture, sexuality might have less of a sensual pull than financial sins. Greed is the fertility god of our age and our culture is addicted to it.

No matter what sins or idols we are tempted with, may we approach God humbly, seeking repentance and redemption through Christ.

Prayer: The Morning Psalm
It is better to rely on the Lord than to put any trust in rulers. All the ungodly encompass me; in the name of the Lord I will repel them. — Psalm 118.9-10

Read more about Lamenting Materialism :: A Guided Prayer
In ancient agrarian society if you worshiped a sun god or a fertility goddess or a god of weather or a god of bountiful harvest you were worshiping a god of financial success. It is akin to our worship of stock performance or financial forecasts or political economic policies.

Read more about The Idol of Immorality, Impurity, and Greed
We are correct when we assess idolatry’s primitive nature. Where we are wrong is in thinking that our modernity exempts us from its allure.