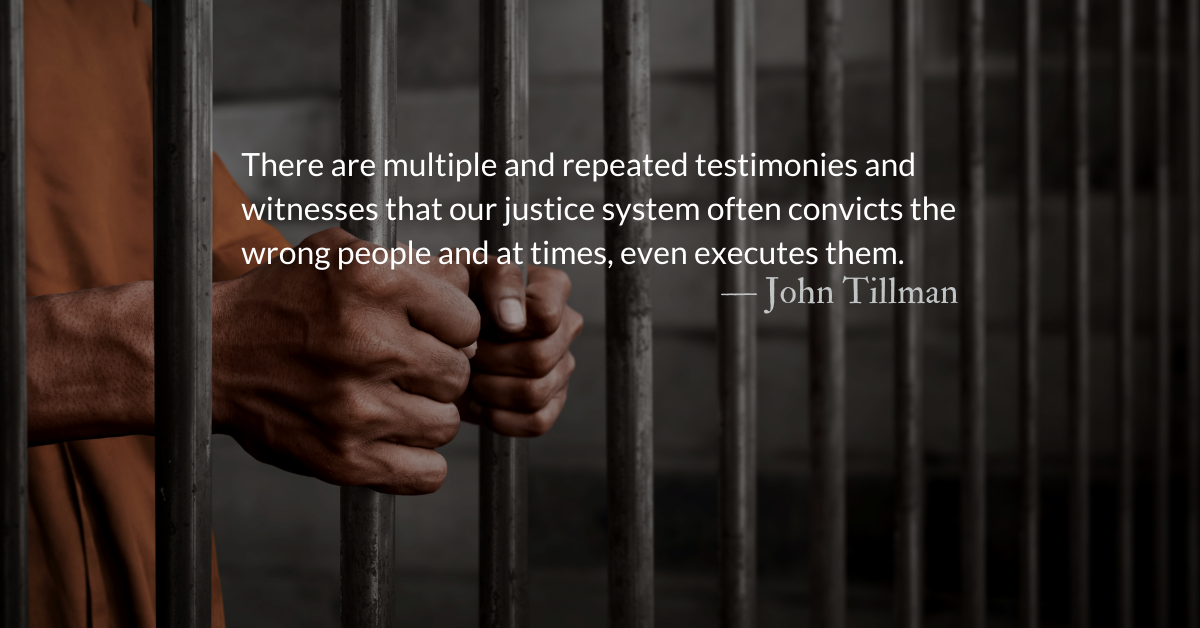 Scripture Focus: Numbers 35.30, 33-34
30 “ ‘Anyone who kills a person is to be put to death as a murderer only on the testimony of witnesses. But no one is to be put to death on the testimony of only one witness.
33 “ ‘Do not pollute the land where you are. Bloodshed pollutes the land, and atonement cannot be made for the land on which blood has been shed, except by the blood of the one who shed it. 34 Do not defile the land where you live and where I dwell, for I, the Lord, dwell among the Israelites.’ ”

God’s laws against bloodshed hold two concerns equally: that the innocent not be wrongfully executed and that the guilty not escape justice.

The standard of evidence for capital punishment in the Bible is higher than in our own legal system. Two eyewitnesses were required. The law also acknowledged that even this safeguard couldn’t stop people from bringing false testimony (or allowing it to stand) and taking someone’s life as a result. Later in Deuteronomy, the law states that those whose testimony is proved false should be subject to the same penalty as those they accuse. (Deuteronomy 19.16-19) How many witnesses would testify if our perjury penalties were similar?

This legal requirement came into play in the Sanhedrin’s trial of Jesus. (Mark 14.53-65; Matthew 26.57-67) Matthew tells us that “finally” two witnesses spoke up against Jesus, but in Mark we get the detail that even their testimony did not agree. Mark’s repeated mention that no two witnesses agreed with one another is a reference to this law, which highlights the illegality of Jesus’ trial and the corruption of the Sanhedrin.

Modern people are prone to shake our heads at ancient societies and exonerate ourselves from such corruption. However, there are multiple and repeated testimonies and witnesses that our justice system often convicts the wrong people and at times, even executes them. Multiple witnesses agree. We often miscarry justice.

God warned the Israelites that bloodshed would defile the land. Then, echoing through the prophets we hear God repeatedly holding the people responsible for the blood of the innocent, the poor, and the foreigner.

May we carry out the penalties of human justice prayerfully, with trembling hearts and hands, aware that we are imperfect and fearful of our just God. May we seek justice humbly, loving mercy, and rejoicing when those declared innocent go free.

Further Reading: You may find further information about wrongful convictions through the following resources: The Equal Justice Initiative and The Innocence Project

Read more about To Maintain Justice
May we reach out, stand up, and rescue. May we fight injustice to bring light in the darkness…

Read more about Living Justice
God declares the fasting he desires from his people is justice (Isaiah 58:5-7).