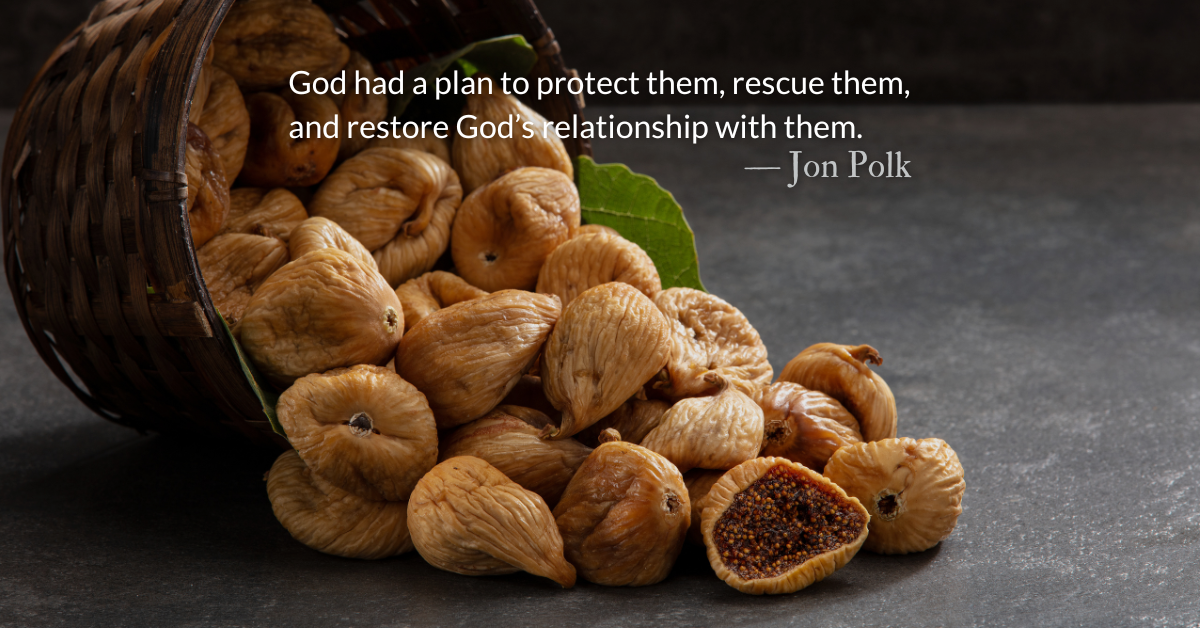 Scripture Focus: Jeremiah 24:1-3
1 After Jehoiachin son of Jehoiakim king of Judah and the officials, the skilled workers and the artisans of Judah were carried into exile from Jerusalem to Babylon by Nebuchadnezzar king of Babylon, the Lord showed me two baskets of figs placed in front of the temple of the Lord. 2 One basket had very good figs, like those that ripen early; the other basket had very bad figs, so bad they could not be eaten.
3 Then the Lord asked me, “What do you see, Jeremiah?”
“Figs,” I answered. “The good ones are very good, but the bad ones are so bad they cannot be eaten.”

Figs could certainly use a brand image makeover. I doubt that any other fruit’s favorability polls are as low as the fig’s.

The familiar Fig Newton cookie was invented in 1891 by a Philadelphia baker. Fig Newtons were one of the first mass-produced baked goods by the newly formed Nabisco cookie company.

The cookies were exclusively filled with fig filling until the 1980s when Nabisco started replacing the fig jam with raspberry, strawberry, blueberry, and apple flavors. In 2012, after over a century known as Fig Newtons, “Fig” was dropped, and the cookies became known simply as Newtons.

According to the company, “It was going to be hard for us to advance the Newtons brand with the baggage of the fig.” Ouch.

Figs are, however, a superfood with incredible nutritional value and the highest fiber and mineral content of the most common fruits and vegetables.

Figs are mentioned throughout the Bible in mostly positive contexts. Figs were one of the fruits mentioned when describing the fertility of the Promised Land. Fig trees symbolize the prosperity of the Jewish nation. Fig cakes were presented as gifts to King David. Hezekiah’s illness was cured by a poultice of figs. A superfood, indeed.

Occasionally in scripture, figs have a negative connotation. Adam and Eve sewed together fig leaves when they realized their nakedness. Isaiah, Jeremiah, Hosea, and Joel used the image of ruined figs as a representation of God’s judgment. And of course, Jesus himself notably cursed a fig tree at Passover.

In Jeremiah 24, we find both good and bad figs. God shows Jeremiah a vision of two baskets of figs at the temple; one basket had good, ripe figs and the other basket had figs that had turned so bad they couldn’t even be consumed.

The good figs are the Jewish exiles in Babylon. As noted in the previous chapter, God had a plan to protect them, rescue them, and restore God’s relationship with them. God says the good figs will return to God with all their heart.

The bad figs are King Zedekiah and his officials. Also noted in the previous chapter, God had a plan to bring them to ruin for their selfishness and poor shepherding of God’s people.

How to interpret Jeremiah’s vision? Simple. Be good figs.


Divine Hours Prayer: The Refrain for the Morning Lessons
Purge me from my sin, and I shall b pure; wash me, and I shall be clean indeed. — Psalm 51.8

Read more about Unexpected Contents of God’s Cup of Wrath
May we soften our hearts…so that we, like the “good figs”…will be carried through the judgment rather than destroyed in it.

Readers’ Choice is Coming!
Tell us about meaningful posts from the past 12 months. Let us know about them and we will share them with others.