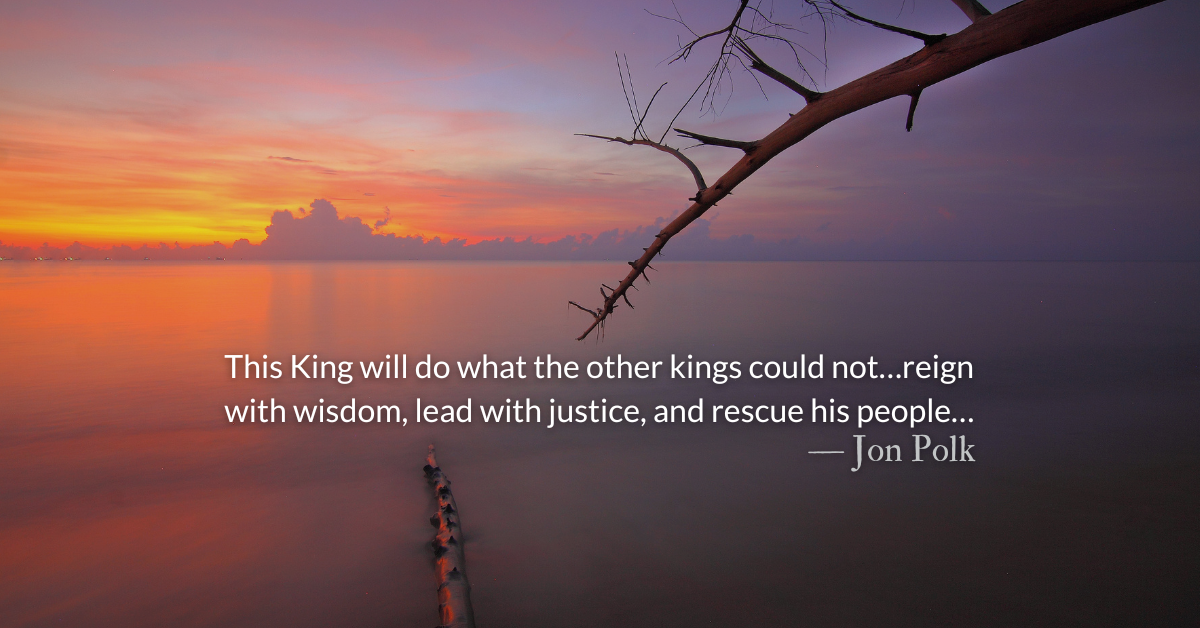 Scripture Focus: Jeremiah 23:5-6
5 “The days are coming,” declares the Lord,
“when I will raise up for David a righteous Branch,
a King who will reign wisely
and do what is just and right in the land.
6 In his days Judah will be saved
and Israel will live in safety.
This is the name by which he will be called:
The Lord Our Righteous Savior.

That’s it. I’ve had enough.

“Woe to the shepherds who are destroying and scattering the sheep of my pasture!” declares the Lord. (Jer. 23:1)

God laments how poorly the kings of Judah have shepherded God’s people. Jeremiah had warned them previously to get their act together, to do what is right by the people, and bring justice to the poor and oppressed (Jer. 22:3-4) because he knew the consequences were dire:

“But if you do not obey these commands, declares the Lord, I swear by myself that this palace will become a ruin.” (Jer. 22:5)

Alas, the string of terrible, self-serving Jewish kings was too much.

Zedekiah ruled over Judah at this particular time. He ascended to the throne when King Nebuchadnezzar of Babylon besieged Jerusalem, capturing King Jehoiachin and naming Zedekiah as regent. Thus began an epic conflict between Judah and Babylon which lasted the eleven years of Zedekiah’s reign and – spoiler alert – ended with the destruction of Jerusalem and the exile of most of the Jews to Babylon.

All is not lost, however, for in one of Jeremiah’s few direct messianic prophecies, there is profound hope! A new King is coming! This King’s name will be The Lord Our Righteous Savior (ironically, Zedekiah’s name means “The Lord is my righteousness”). This King will do what the other kings could not.

This King will reign with wisdom, lead with justice, and rescue his people from captivity. This rescue will be so great that the exodus from Egypt, the pinnacle event in the Old Testament, will pale in comparison. (Jer. 23:7-8)

This King will be a Righteous Branch, an ancient term for the rightful heir of an established dynasty.

Who can forget the infamous Christmas Branch from A Charlie Brown Christmas? Selected by Charlie Brown to be the centerpiece for the annual Christmas Play, his scrawny pine branch “tree” is the laughingstock of the whole Peanuts gang. Dejected, Charlie Brown leaves the production all alone. Led by Linus, the gang eventually follows and, using ornaments and lights from Snoopy’s doghouse, transforms the branch into a wondrous tree.

The Righteous Branch was also despised and rejected and held in low esteem. (Isaiah 53:3)

This Righteous Messianic Branch, the rightful heir of David’s line, sacrificed his life so that we might be reunited with God, a relational rescue so great that, indeed, the exodus out of Egypt, pales by comparison.


Divine Hours Prayer: The Refrain for the Morning Lessons
This is the Lord’s doing, and it is marvelous in our eyes. — Psalm 118.23

Read more about Hope Amidst Destruction
Even among the destruction of what is coming to Judah in Isaiah’s prophecies, there is hope.

Readers’ Choice is Coming!
We want to hear about your favorite posts from the past 12 months. Even if all you have to say is, “It blessed me,” let us know about it.