Blessings of the Dispossessed

Scripture Focus: Genesis 26.26-31
26 Meanwhile, Abimelek had come to him from Gerar, with Ahuzzath his personal adviser and Phicol the commander of his forces. 27 Isaac asked them, “Why have you come to me, since you were hostile to me and sent me away?”
28 They answered, “We saw clearly that the Lord was with you; so we said, ‘There ought to be a sworn agreement between us’—between us and you. Let us make a treaty with you 29 that you will do us no harm, just as we did not harm you but always treated you well and sent you away peacefully. And now you are blessed by the Lord.”
30 Isaac then made a feast for them, and they ate and drank. 31 Early the next morning the men swore an oath to each other. Then Isaac sent them on their way, and they went away peacefully.

Matthew 25.34-40
34 “Then the King will say to those on his right, ‘Come, you who are blessed by my Father; take your inheritance, the kingdom prepared for you since the creation of the world. 35 For I was hungry and you gave me something to eat, I was thirsty and you gave me something to drink, I was a stranger and you invited me in, 36 I needed clothes and you clothed me, I was sick and you looked after me, I was in prison and you came to visit me.’
37 “Then the righteous will answer him, ‘Lord, when did we see you hungry and feed you, or thirsty and give you something to drink? 38 When did we see you a stranger and invite you in, or needing clothes and clothe you? 39 When did we see you sick or in prison and go to visit you?’
40 “The King will reply, ‘Truly I tell you, whatever you did for one of the least of these brothers and sisters of mine, you did for me.’

Reflection: Blessings of the Dispossessed
By John Tillman

Despite Abraham’s treaty with Abimelek, (Genesis 21.21-34) Isaac has difficulties with Abimelek’s government and people.

Isaac is unfairly treated; he is forced by violence to move on; he is even relocated by government order. The closest (but still imperfect) modern parallel is the treatment of indigenous populations.

Native Americans, and other indigenous communities, uniquely know what Isaac’s experience was like. All across the world, indigenous people faced powerful governments that continually violated treaties and moved native peoples off of the land they had been living on.

Rich Mullins wrote about this in, The Howling, a song of lament and faith.

“Cause I can see a people dispossessed
Broken and brave in the face of so much fear
Driven from their homes by the greed of a nation
Whose treaties were as good as litter
Along the trail of their tears”
— Rich Mullins, The Howling

Non-Western Christians all across the world today also know this type of persecution and suffering. In many places, Christian communities face violence or relocation, either from militia groups or under the authority of their governments.

Even in his suffering, Isaac blessed the land that he would one day inherit by digging wells that would water the land long after Isaac moved on. Eventually, Abimelek came to Isaac because he recognized God’s blessing on him and Isaac was able to confront Abimelek regarding his mistreatment and gain redress.

Actions of faithfulness and engaging with the difficult work of peacemaking will bring blessings to those around us. Avoiding violence and speaking for the truth will demonstrate that God is with us even if we must suffer for it.

We have been promised by Jesus that we will have trouble in this world. The level and severity of that “trouble” will vary. We may be targeted. We may be slandered. We may be “moved on” from places we feel we belong. Perhaps we will see partial justice in earthly kingdoms. Indeed, we are commanded to work to this end. But we also know that justice will only be completed in the coming Kingdom.

We are, in a sense, passive sojourners, like Isaac. We make our way the best we can in a land not yet submitted to God’s kingdom that we know is coming.

May we sojourn humbly in faith. May we enact justice and peace. May kings come to us, recognizing a source of God’s blessings.

Read more about Choosing Gentleness Over Violence
What we say and how we say it matters because…Sticks and stones start as words and words start in our sinful hearts.

Read more about Abimelek, Caesar, and Jesus
Abraham, by God’s command, prayed for Abimelek, blessed him, and lived under Abimelek’s rule, making a treaty with him. 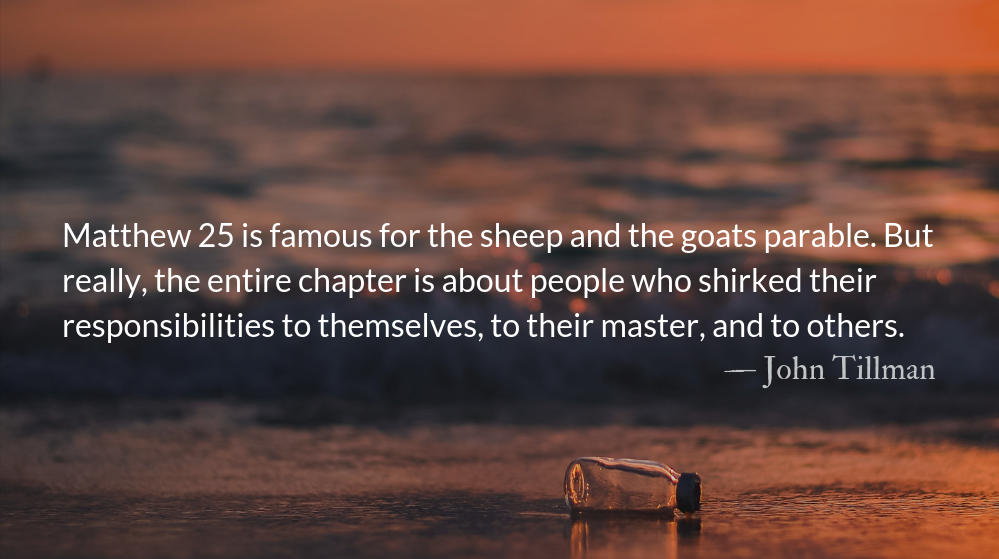 A Trinity of Neglect :: A Guided Prayer

“The King will reply, ‘Truly I tell you, whatever you did for one of the least of these brothers and sisters of mine, you did for me.’

1 Timothy 4.13-15
Until I come, devote yourself to the public reading of Scripture, to preaching and to teaching. Do not neglect your gift, which was given you through prophecy when the body of elders laid their hands on you.

Be diligent in these matters; give yourself wholly to them, so that everyone may see your progress.

Reflection: A Trinity of Neglect :: A Guided Prayer
By John Tillman

Matthew 25 is famous for the sheep and the goats parable. But really, the entire chapter is about people who shirked their responsibilities to themselves, to their master, and to others. The foolish virgins, the wicked servant, and the goats are a trinity of spiritual neglect.

Pray this weekend through the three stories. Ask the Holy Spirit to show you warning signs if you are following the path of one of these neglectful souls.

May we avoid the neglect of The Foolish Virgins…
We need not stumble into extravagant sin to endanger our relationship with you, Lord.

The virgins excluded from the banquet were not lascivious, or lustful. They were not greedy or cruel. They simply were irresponsible and unthoughtful.

May we never fall into the dim thoughtlessness of complacency, and may we regularly refresh ourselves with the oil of your Holy Spirit to brighten our lamps when called on.

May we avoid the lazy apathy of The Wicked Servant…
We need not squander your blessings to use them unworthily, oh Lord.

The servant given one bag of gold didn’t lose it, or gamble it away. He didn’t try to steal it. He just didn’t try to use it. The servant failed to understand, and so do we, that the king wasn’t investing his money with people. He was investing in people with his money. The king expected growth in the servant. Growth of the gold would only be a side effect. He would have found more mercy in the master had he tried and failed, than in failing to even try.

May we dare to step out with whatever seemingly insignificant gift he has given us. You, oh Lord, do not despise small beginnings or small gifts well and truly used in faith.

May we avoid the careless denial of responsibility of the goats…
We need not be ignorant of you, Lord, to miss heaven. We need only be uninvolved and unconcerned for others.

The goats didn’t actively cause hunger, or thirst, or homelessness, or refugees. They didn’t cause nakedness, or crime, or unjust punishment, or oppression, or sickness. They just didn’t do anything about it. This was enough to show that Christ had no place in their lives and they had no place with Christ in his eternal life.

Dwell with the Holy Spirit this weekend, asking him to enlighten you about areas in which you may be prone to following in the missteps of the virgins, the servant, or the goats.

Prayer: The Refrain for the Morning Lessons
For God, who commanded the light to shine out of darkness, hath shined in our hearts, to give the light of the knowledge of the glory of God in the face of Jesus Christ.  — 2 Corinthians 4.6

Read more about Cultivation Leads to Harvest
We are responsible for the care of our communities, spiritually and physically. This requires a financial and a spiritual harvest.

Read more about Beyond Selfish Thankfulness
We too often, like Jonah, feel responsible that those who have wronged us should not “get away with it.” But in God’s timing, nothing goes unpunished.