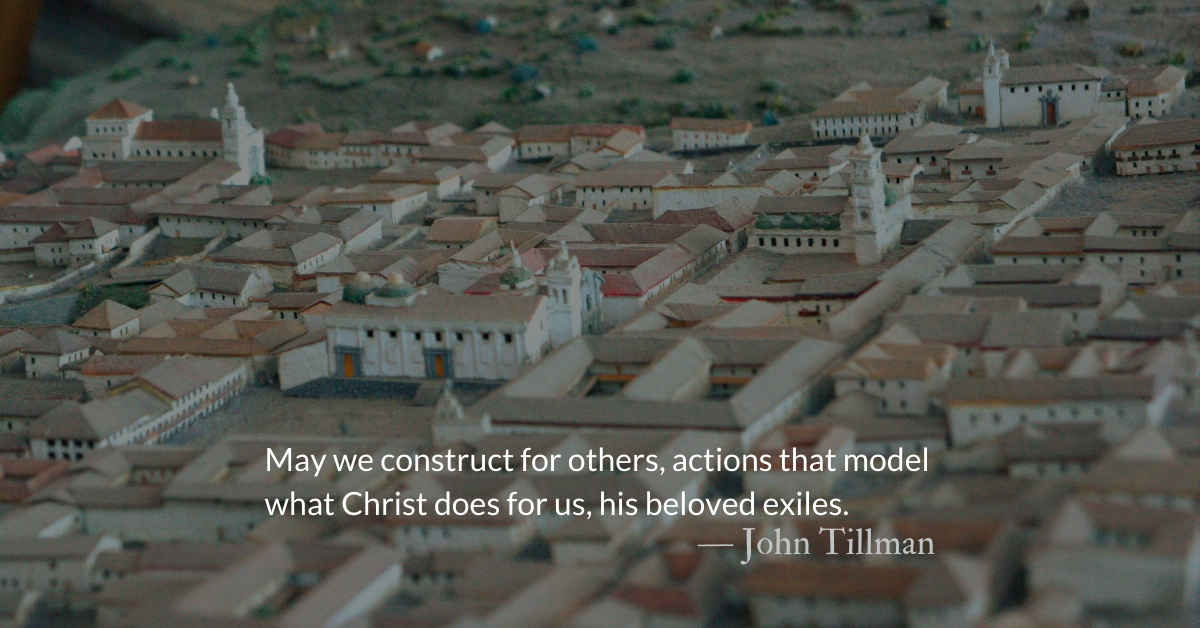 Model of an Exile

Scripture Focus: Ezekiel 4.1-4
“Now, son of man, take a block of clay, put it in front of you and draw the city of Jerusalem on it. 2 Then lay siege to it: Erect siege works against it, build a ramp up to it, set up camps against it and put battering rams around it. 3 Then take an iron pan, place it as an iron wall between you and the city and turn your face toward it. It will be under siege, and you shall besiege it. This will be a sign to the people of Israel.
4 “Then lie on your left side and put the sin of the people of Israel upon yourself.

Reflection: Model of an Exile
By John Tillman

Ezekiel didn’t preach attempting to prevent the judgment of God—he already lived under it. Ezekiel is an exile. We have this in common with him.

Ezekiel served those who had already suffered exile. They had experienced sieges and been defeated in battle. They had been stripped of their property, family members, and clothing and marched ignominiously into slavery and servitude in Babylon.

In his acting out of the final siege of Jerusalem, however, Ezekiel introduces something other than the starvation, the deprivation of freedom, or the destruction these people had already experienced. He demonstrated the role of someone who would bear the sins of the city.

The word translated “bear” can mean to lift or carry away. The people Ezekiel was serving had already been “carried away” into captivity. But part of Ezekiel’s message was that their sin would one day be carried away by another. The Messiah to come would bear their burdens, sorrows, and sins.

Ezekiel did not just build a model of a battle, he gave us a model of how to minister to our fellow exiles and to the land in which we are foreigners. He cares for the exiles, cautioning them to not forget their God in this new land. He confronts them, refusing to avoid the hard truth that their sins brought destruction to the city, the country, and the people they loved. He also comforts them, teaching that there will be a time of restoration, healing, and peace.

As we worship God in this world, we may feel under siege. This should remind us that we are in a state of exile. No matter how comfortable we allow ourselves to become in our countries, our cities, or our cultures, we are from another place and represent another kingdom.

We must not avoid the difficult truths of our sins and the consequences that affect us in this falling empire of Babylon in which we live. We also must speak of the healing and comfort available in the Messiah, Jesus Christ, who bears our sins.

Divine Hours Prayer: The Greeting
Your statutes have been like songs to me wherever I have lived as a stranger. — Psalm 119.54
– Divine Hours prayers from The Divine Hours: Prayers for Summertime by Phyllis Tickle

Read more about Faithful Through Exile
How can God promise salvation when he also promises exile? Does he truly care about his people?