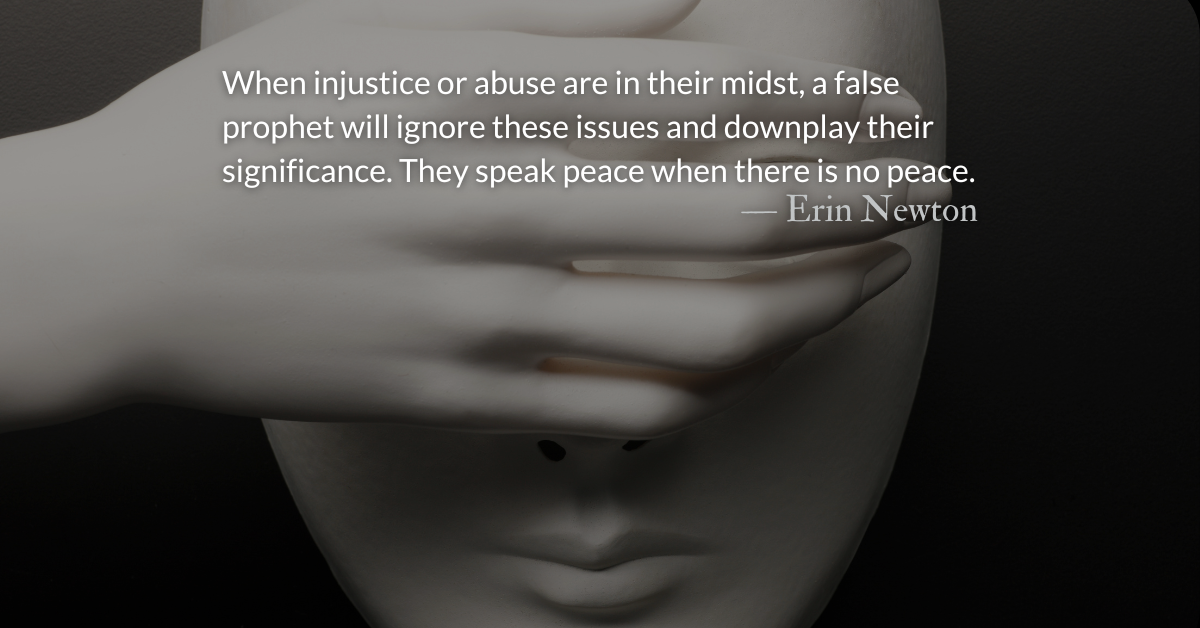 What is a False Prophet?

Scripture Focus: Ezekiel 13:6, 10
6 Their visions are false and their divinations a lie. Even though the Lord has not sent them, they say, “The Lord declares,” and expect him to fulfill their words…

10 “‘Because they lead my people astray, saying, “Peace,” when there is no peace.

Reflection: What is a False Prophet?
By Erin Newton

There is no single word in Hebrew to designate a false prophet from a legitimate prophet. In the New Testament, the Greek language provides a word, pseudoprophetes. Quite clearly, we see the two words combined: pseudo + prophet. This is a phony, fake, counterfeit speaker for God.

In the Old Testament, they are referred to generically as “prophets” without a specific qualifying word to denote falsehood. How do we know it is a false prophet?

In Ezekiel, false prophets spoke out of their own imagination but claimed they had the words of God. They spoke about peace when there was none. They created a sense of security, that was merely a façade, a prop. God speaks against these imposters and declares their coming ruin.

There is a good warning here from the lack of a Hebrew word for false prophets. They have the same titles as legitimate pastors, priests, reverends, and leaders. By name, they are just like those who speak the words of God, the words of truth. How will we know if those among us are false prophets?

When every religious leader claims to be speaking truth, declaring the words of God, heralding their interpretation as “gospel,” what will be the litmus test for all these words? The example in Ezekiel reveals two things to look for: ignoring the reality of suffering and avoiding convicting or uncomfortable messages.

False prophets will tickle the ear of their audience with words of false peace. When injustice or abuse are in their midst, a false prophet will ignore these issues and downplay their significance. They speak peace when there is no peace.

False prophets build a sense of security for their audience by erecting walls that are nothing more than paper mâché. This may look like claims of financial or physical blessings as a way to ward off suffering in life. This may be the call to rely on political parties or elected officials to keep evil from encroaching on one’s way of life. They will claim that nothing can harm you as long as you [fill in the blank.]

These messages cannot be supported by the whole of Scripture. Look at Job. Look at Esther. Look at Paul. These were all righteous people who suffered personally or had to walk through the hardship of suffering around them.

False prophets call themselves authentic; we must learn the difference.

Divine Hours Prayer: The Refrain for the Morning Lessons
Let not those who hope in you be put to shame through me, Lord God of hosts; let not those who seek you be disgraced because of me, O God of Israel. — Psalm 69.7

Read more about Sufferings and False Prophets
False prophets today may be religious or political…what they have in common is telling us exactly what we want most to hear.

Read more about Cut and Run from False Prophets
Zechariah’s audience knew that lying prophets were deadly. Their lies killed. 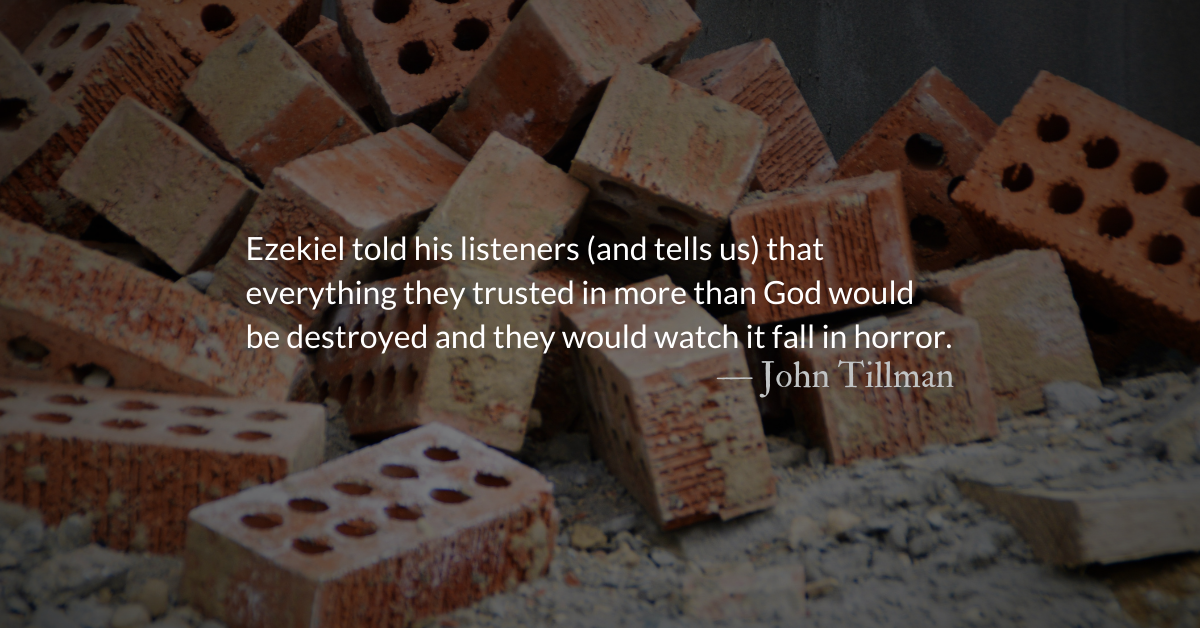 Ezekiel 13.10-12
10 “ ‘Because they lead my people astray, saying, “Peace,” when there is no peace, and because, when a flimsy wall is built, they cover it with whitewash, 11 therefore tell those who cover it with whitewash that it is going to fall. Rain will come in torrents, and I will send hailstones hurtling down, and violent winds will burst forth. 12 When the wall collapses, will people not ask you, “Where is the whitewash you covered it with?”

Today’s scriptures show us David’s response to violent men like Doeg the Edomite in Psalm 52 and a faithless culture that denies God in Psalm 53.1-2 and they seem particularly relevant.

Political violence, like that committed by Doeg, was still the norm during Jesus’ ministry. The disciples were familiar with political murders and slaughters of innocents that would be shocking in today’s world.

It is part of our modern vanity that we falsely believe ourselves beyond the violence of previous ages. Despite our sense of moral superiority, we have not advanced beyond violence for political ends.

Our political rancor has reached the point of normalizing violence. In the dystopian novel, 1984, Orwell described ”The Ministry of Peace” which dealt in war. The dystopian “War is Peace” concept has been gradually adopted by all political groups, Christians not excluded.

It seems more and more Christians are willing to whitewash politically motivated violence as necessary self-defense. We have sunk to the point that political opponents (left and right) cheer their violent allies and point to violent opponents as justification for further violence. Such violent language unfailingly leads to murder in the streets.

If trends continue, there will soon be an event similar to the Kent State shootings. For Christians to fail to condemn, or worse, to directly endorse this type of violence is a great moral and theological failing.

Ezekiel spoke to whitewashing prophets of his day who glossed over the weakness “a wall” they claimed would defend the faithful from harm. Ezekiel told his listeners (and tells us) that everything they trusted in more than God would be destroyed and they would watch it fall in horror.

While psalmists and prophets often cheer the wielders of violence, Jesus sets a new standard for us when he calls us to bless and not curse, to turn the other cheek to insults, and to go the extra mile, enduring under oppression.

We are called to stand up for and support those who are being oppressed to aid them, defend them, and speak out for them.

We are called to endure patiently our own oppression, ensuring that we are suffering for doing good, not for doing evil.

May we remember that responding to oppression is not about vengeance or self-defense.

Our response must be one of remaining faithful in what we say and do, while patiently suffering the consequences of doing good.

Divine Hours Prayer: The Greeting
Lord, you have been our refuge from one generation to another.
Before the mountains were brought forth, or the land and the earth were born, from age to age you are God. — Psalm 90.1-2– Divine Hours prayers from The Divine Hours: Prayers for Summertime by Phyllis Tickle

Read more about Choosing Gentleness Over Violence
The language of many Christians and prominent Christian pastors has followed [the world], growing combative, disrespectful, and even violent.