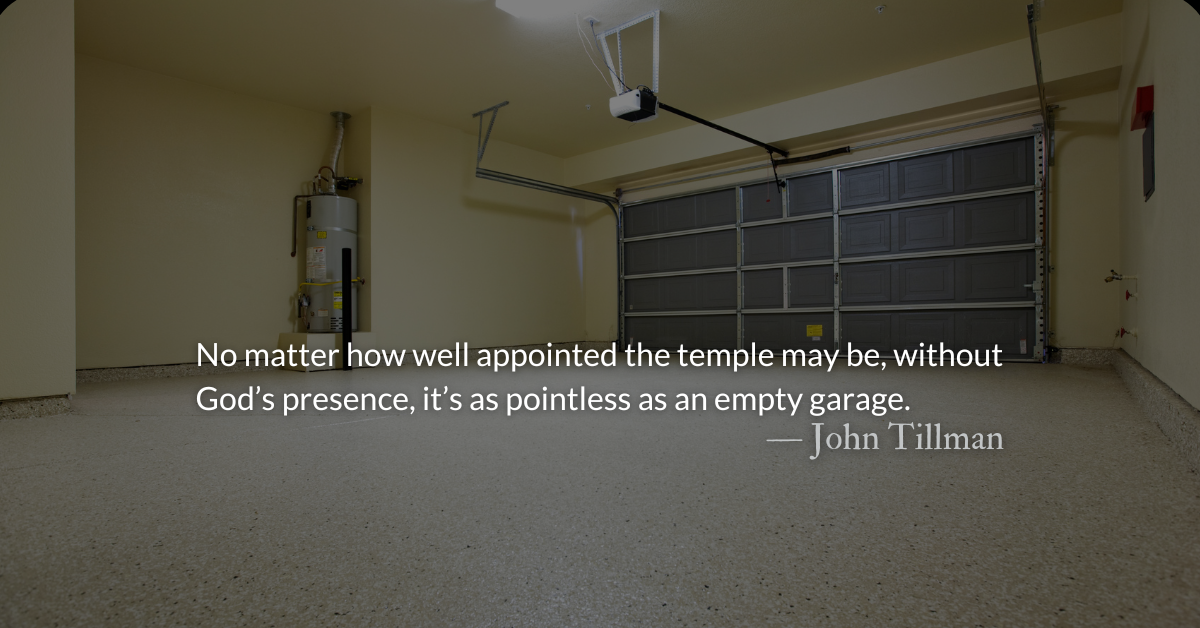 When God Leaves the Building

Scripture Focus: Ezekiel 10.18-22
18 Then the glory of the Lord departed from over the threshold of the temple and stopped above the cherubim. 19 While I watched, the cherubim spread their wings and rose from the ground, and as they went, the wheels went with them. They stopped at the entrance of the east gate of the Lord’s house, and the glory of the God of Israel was above them.
20 These were the living creatures I had seen beneath the God of Israel by the Kebar River, and I realized that they were cherubim. 21 Each had four faces and four wings, and under their wings was what looked like human hands. 22 Their faces had the same appearance as those I had seen by the Kebar River. Each one went straight ahead.

Reflection: When God Leaves the Building
By John Tillman

Many study the details of Ezekiel’s vision. Many paintings, many theories, and many words have come from this imagery. Some think Ezekiel was hallucinating or on drugs. Some think his vision describes an alien spaceship. (Easier to believe in than God, I suppose?) But Ezekiel isn’t some poor, inept, ignorant, ancient fool. His literary skill is beyond ours. It’s better to admit we don’t understand what we are reading than to accuse him of not understanding what he saw.

What Ezekiel saw is less important than what he is telling us. In seeking to define the objects he described, many have missed the object of his argument.

The point of Ezekiel’s vision is not to describe the kind of vehicle God drives. The point is to tell us God is leaving. God is moving out—leaving the house David and generations of followers had worshiped in. The glory is departing from the temple.

The “car”, if God drove one, is pulling out of the garage. No matter how well appointed the temple may be, without God’s presence, it’s as pointless as an empty garage. Its tools have no meaning. It smells vaguely of gasoline and rubber but there’s no horsepower, no purpose. It’s just an empty room.

God did not leave without reason or without many, many warnings and pleadings with his people. Yet people were surprised at God’s leaving. They missed the warnings. They ignored the pleadings.

If God can leave the Temple Solomon built, he can surely leave our churches, our organizations, and our nations. That’s the scary part. The beautiful part is that God didn’t leave his people. He just left their corrupted places. His people, including Ezekiel, were either already in exile or on their way. God went with them just as he was with them in Egypt. Then he heard their cries and brought them out, repentant and joyful.

Let us never be so prideful, so unheeding, that we are surprised to turn around and find that God has left the building. Let us never be so despairing over God abandoning a building, a country, or an organization that we forget that God remains close to his faithful remnant. Even if everything falls and burns, God can restore, if we will simply be faithful.

Read more about Hearts God Moves
In Ezra we will see God’s work to, stone by stone, reconstruct the Temple of Jerusalem to bear his name.