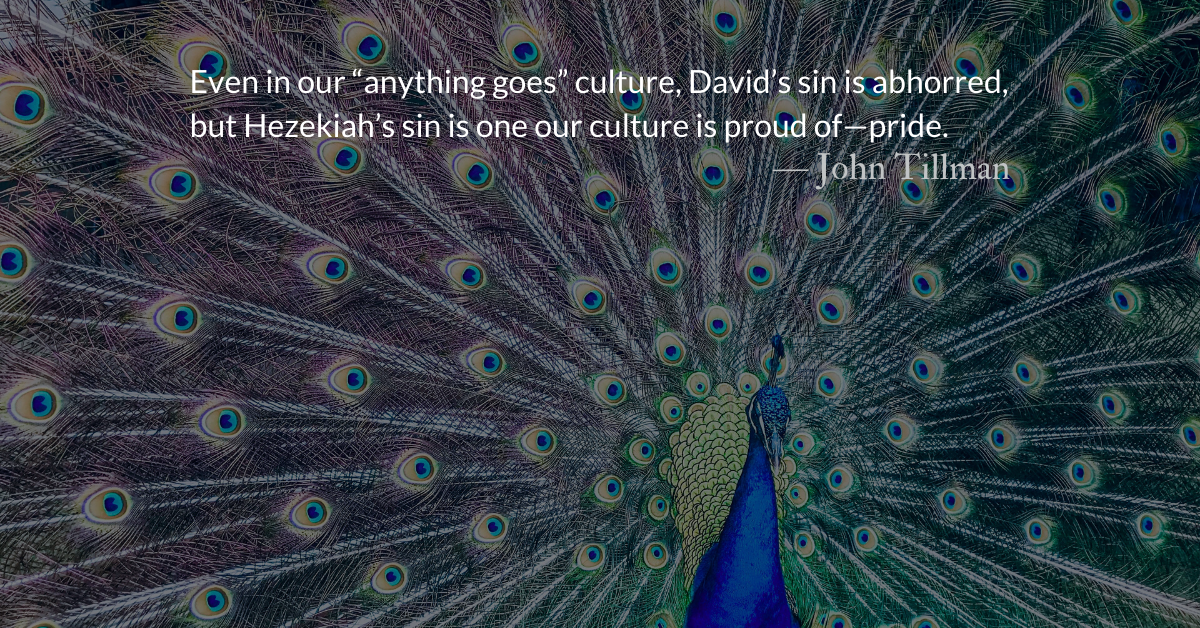 A Sin We Are Proud Of

Scripture Focus: 2 Kings 10:19
“The word of the Lord you have spoken is good,” Hezekiah replied. For he thought, “Will there not be peace and security in my lifetime?”

Hebrews 2.1
We must pay the most careful attention, therefore, to what we have heard, so that we do not drift away.

Reflection: A Sin We Are Proud Of
By John Tillman

Hezekiah is one of the greatest kings among the great kings of Judah. The writer of 2 Kings says of him, “Hezekiah trusted in the Lord, the God of Israel. There was no one like him among all the kings of Judah, either before him or after him.”

Hezekiah drove out idolatry and reestablished true worship. In Hezekiah’s day, the Temple of the Lord had actually been closed up, like a shop with no customers. The lights were out. The doors were barred.

Hezekiah not only opened them, he covered the doors and other items in the Temple in gold and silver, reopening and restoring the Temple and the priesthood to shimmering glory.

Hezekiah is, however, as deeply flawed as his father David before him. Even in our “anything goes” culture, David’s sin is abhorred, but Hezekiah’s sin is one our culture is proud of—pride.

Other passages about Hezekiah make it clear that God was concerned about Hezekiah’s pride. God tested Hezekiah by sending Babylonians to inquire about Hezekiah’s miraculous healing. Instead, Hezekiah showed off his accomplishments and wealth to them, prompting Isaiah’s prophecy that everything that had been shown to them would be carried off to Babylon.

At least David repented of his lust and murder, giving us the beauty of Psalm 51. All we get from Hezekiah when he is confronted with the results of his sin is a shrugging, selfish, justification. Hezekiah says that at least there will be “peace and security in my lifetime.“

Our culture has a hard time seeing what Hezekiah did wrong. We hesitate to equate Hezekiah’s sin to David’s. Pride and selfishness don’t seem that bad or dangerous. Storing up for ourselves is prudence. Seeking our own peace and prosperity is honorable. God thinks otherwise. Jesus spoke to his time, Hezekiah’s time, and ours when he said, “You fool! This very night your life will be demanded from you. Then, who will get what you have prepared for yourself?”

We do not know where Christ was standing when he told the parable of the rich fool, but I like to imagine that he might have been standing next to some of the rubble from the buildings Hezekiah built to hold his treasures of gold and silver, food and grain. Christ’s audience would have understood the significance.

Obtaining “peace and security” in our lifetimes is not a gospel-centered way of living. We are expected to think beyond ourselves. May we humbly repent.

Pride, greed, and love of wealth are sins equally heinous in God’s eyes as lust, rape, and murder. May we humbly repent.

Divine Hours Prayer: A Reading
Jesus went on to say. ” What is the kingdom of God like? What shall I compare it with? It is like a mustard seed which a man took and threw into his garden: it grew and became a tree, and the birds of the air sheltered in its branches.”— Luke 113:18-19

Read more about The Identical Nature of Greed and Lust
When the prophet Nathan needed an analogy for lust, he chose a parable about a rich man stealing material goods from the poor.

Read more about Pride and Shortsightedness :: Throwback Thursday
The remarkable life of Hezekiah ends in pride and shortsightedness.