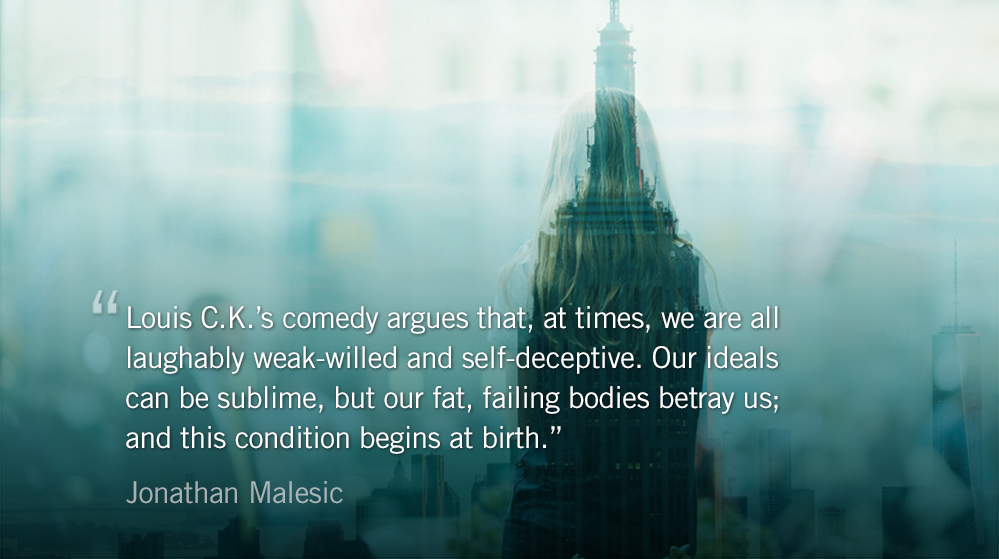 “Louis C.K.’s comedy argues that, at times, we are all laughably weak-willed and self-deceptive. Our ideals can be sublime, but our fat, failing bodies betray us; and this condition begins at birth,” writes Jonathan Malesic in a wonderful piece on Augustine and the “theology of Louis C.K.”

The comedian is known equally for his vulgarity and brute honesty of the human condition. Malesic explores how the two work together to paint a picture of sin in the modern secular world:

The comedy of Louis C.K. plunges into moral depravity in order to discover its illogic. By contrast, George Carlin’s comedy understood sin only on a third-grade level, as an action that breaks the (to him, absurd) rules. In Louis C.K.’s comedy, sin is perverse desire. It is a profound Augustinian thread. Following it leads to some of Louis C.K.’s best insights but also to his darkest and most questionable material.

Yet an understanding of sin without an acceptance of the gospel leads to despair and futility. “Louis C.K.’s comedic universe does not include supernatural grace or a city of God,” Malesic concludes. In an interview on NPR’s Fresh Air C.K. summarizes his understanding of religion through the words he remembers his priest telling him during confession, “Try — try harder.”

Augustine, in his work City of God condemned this way of thinking as a “marvelous shallowness.” It is another way, the theologian said, in which humans try to find their chief blessedness “in this life and in themselves.”

Augustine saw a way out of sin, of course. His rigorous examination of conscience leads to his awareness of a need for God’s grace. And knowing that God has already bestowed that grace is a cause for joy.

The theologian leads us to Christ, the comedian causes us to ask how we interact with the modern world on a daily basis. Can we enjoy the things of the world while relentlessly pursuing Christ?

In his book Becoming Worldly Saints Michael Wittmer explores “God’s enthusiastic embrace of the material world.” Wittmer acknowledges the ongoing tension of loving God with all our heart, soul, and mind and enjoying the world God created. “If we ever stop feeling the pull between creation and redemption, that can only mean we’ve fallen off one side or the other.” Christianity Today summarizes:

While Wittmer affirms a worldly faith that embraces earth, he is also careful to emphasize the priority of heaven—and the purposes of redemption. He warns against finding ultimate satisfaction and meaning in the things of this world. “The pleasures of creation must not lull us to sleep. We are at war, and we must never forget our heavenly calling.” To love the temporal world is good; to love eternity is best.

Left to ourselves this tension leads us in a circle. It is only when we pursue the transcendent truth and goodness of God as our chief end that we find both hope in this broken world and grace for our own sin. Or, as Augustine says,

“The just lives by faith,” for we do not as yet see our good, and must therefore live by faith; neither have we in ourselves power to live rightly, but can do so only if He who has given us faith to believe in His help do help us when we believe and pray. 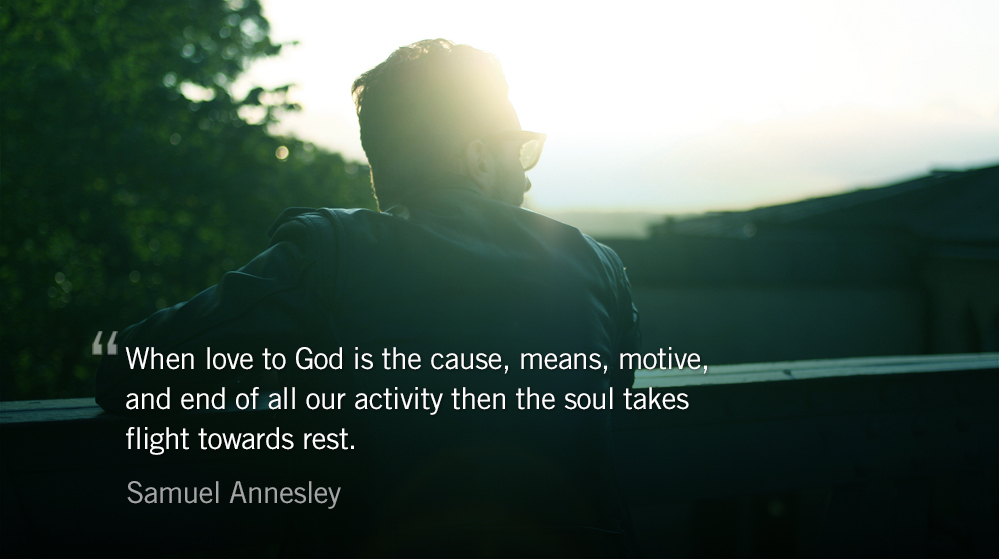 How Can We Find Spiritual Rest? :: Readers’ Choice

“I love lists. This list has more important stuff in it than any of mine do. Sabbath rest, rest from the hamster wheel, rest from the rest of life…we all need it but few of us even realize that it’s the missing piece in our busyness.” — Sam

How can we live with a conscience that is pacified by the blood of Christ? Christians, be persuaded to practice these:

1. Take heed of every sin, count no sin small.

2. Set upon the healing duty of repentance.

4. Be serious and frequent in the examination of your heart and life. This is so necessary to the getting and keeping of a right and peaceable conscience, that it is impossible to have either without it.

5. Be much in prayer, in all manner of prayer, but especially in private prayer.

6. Let your whole life be a preparation for heaven. Strip yourself of all encumbrances, that thou mayest attend unto piety. Pleasures may tickle you for a while; but they have an heart-aching farewell. You may call your riches good; but within a few days, what good will they do you? Men may flatter you for your greatness; but with God your account will be the greater.

7. Live more upon Christ than upon inherent grace. Do not venture upon sin because Christ hath purchased a pardon; that is a most horrible and impious abuse of Christ.

8. Be, every way, nothing in your own eyes. It is the humble soul that thrives exceedingly. “And, alas! what have we to be proud of?

9. Entertain good thoughts of God. We never arrive to any considerable holiness or peace till we lose ourselves in Deity;

10. Do all you do out of love to God. Spiritual love-sickness is the soul’s most healthy constitution. When love to God is the cause, means, motive, and end of all our activity then the soul takes flight towards rest.

O my soul, you are so little, why won’t you open all your little doors; why wont you extend your utmost capacity, that you mayest be wholly possessed, wholly satiated, wholly ravished with the sweetness of so great love?

O, therefore, my most loving God, I beseech thee, tell me what may most effectually draw out my love to thee, considering what prevention of love, what privative, positive good things I receive from thee, infinite in greatness, infinite in multitude!

*Today’s devotional is abridged from, “How May We Be Universally and Exactly Conscientious?”

Through Gates of Splendor :: Readers’ Choice

“I love this post because it both affirms and convicts me. The first half vindicates my intuition that life is irreducibly complex and that reductionistic ways of thinking about God are likely to be wrong. Yet the second half reveals how difficult it is to rest in the ‘happy ending of God’s story’ in the face of everyday disappointments.” — Scott

Psalm 77:9-10
Has God forgotten to be gracious? Has he in anger shut up his compassion? Then I said, “I will appeal to this, to the years of the right hand of the Most High.”

Elisabeth Elliot , Through Gates of Splendor (1957), Epilogue II (1996)
There is always the urge to oversimplify, to weigh in at once with interpretations that cannot possibly cover all the data or stand up to close inspection. We know, for example, that time and again in the history of the Christian church, the blood of martyrs has been its seed. So we are tempted to assume a simple equation here. Five men died. This will mean x-number of Waorani Christians.

Perhaps so. Perhaps not. Cause and effect are in God’s hands … God is God. I dethrone him in my heart if I demand that he act in ways that satisfy my idea of justice … There is unbelief, there is even rebellion, in the attitude that says, ‘God has no right to do this to five men unless …’

Those men had long since given themselves without reservation to do the will of God … For us widows, the question as to why the men who had trusted God to be both shield and defender could be allowed to be speared to death was not one that could be smoothly or finally answered in 1956, not yet silenced in 1996 …

I believe with all my heart that God’s Story has a happy ending … But not yet, not necessarily yet. It takes faith to hold on to that in the face of the great burden of experience, which seems to prove otherwise. What God means by happiness and goodness is a far higher thing than we can conceive …

The massacre was a hard fact, widely reported at the time, surprisingly well remembered by many even today. It was interpreted according to the measure of one’s faith or faithfulness–full of meaning or empty. A triumph or a tragedy. An example of brave obedience or a case of fathomless foolishness … But the danger lies in seizing upon the immediate and hoped-for, as though God’s justice is thereby verified …

A healthier faith seeks a reference point outside of all human experience, the Polestar which marks the course of all human events, not forgetting that impenetrable mystery of the interplay of God’s will and man’s … We are sinners. And we are buffoons … It is not the level of our spirituality that we can depend on. It is God and nothing less than God, for the work is God’s and the call is God’s and everything is summoned by him and to his purposes … 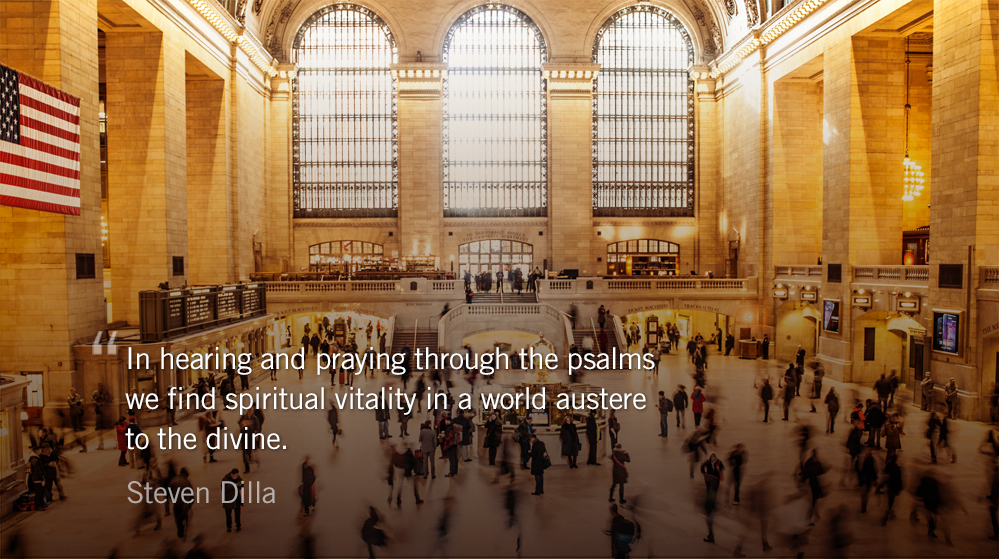 Praying Through the Stress of Work :: Readers’ Choice

“I love the Park Forum’s consistency and point of view on how faith and work intersect. It really helps me reframe my mornings” — Leiv

The idea of commanding one’s soul to bless the Lord, as the Psalmist does five times in Psalms 103-104, can seem trite and overly emotional — but this is far from the holistic rejoicing the psalmist had in mind.

“Tuesday, June 26. In the morning my desires seemed to rise, and ascend up freely to God. Was busy most of the day in translating prayers into the language of the Delaware Indians; met with great difficulty… But though I was much discouraged with the extreme difficulty of that work, God supported me; and especially in the evening gave me sweet refreshment.

“In prayer my soul was enlarged, and my faith drawn into sensible exercise; was enabled to cry to God for [them]; and though the work of their conversion appeared impossible with man, yet with God I saw all things were possible.

“My faith was much strengthened, by observing the wonderful assistance God afforded his servants Nehemiah and Ezra, in reforming his people, and re-establishing his ancient church.

“I was much assisted in prayer for dear christian friends, and for others that I apprehended to be Christ-less… [I] was enabled to be instant in prayer for them; and hoped that God would bow the heavens and come down for their salvation. It seemed to me there could be no impediment sufficient to obstruct that glorious work, seeing the living God, as I strongly hoped, was engaged for it.

“I continued in a solemn frame, lifting up my heart to God for assistance and grace, that I might be more mortified to this present world, that my whole soul might be taken up continually in concern for the advancement of Christ’s kingdom: longed that God would purge me more, that I might be as a chosen vessel to bear his name among the heathens. Continued in this frame till I dropped asleep.