The King We Want

Scripture Focus: Zechariah 9.9-10
9 Rejoice greatly, Daughter Zion!
Shout, Daughter Jerusalem!
See, your king comes to you,
righteous and victorious,
lowly and riding on a donkey,
on a colt, the foal of a donkey.
10 I will take away the chariots from Ephraim
and the warhorses from Jerusalem,
and the battle bow will be broken.
He will proclaim peace to the nations.
His rule will extend from sea to sea
and from the River to the ends of the earth.

1 Samuel 8.6-7
6 But when they said, “Give us a king to lead us,” this displeased Samuel; so he prayed to the Lord. 7 And the Lord told him: “Listen to all that the people are saying to you; it is not you they have rejected, but they have rejected me as their king.

John 19.15
15 But they shouted, “Take him away! Take him away! Crucify him!” “Shall I crucify your king?” Pilate asked. “We have no king but Caesar,” the chief priests answered.

From John: This post and poem were written several days before the shootings at Robb Elementary in Uvalde. We mourn and cry in anger and grief this week. We long ever and ever more for Jesus, the breaker of battle bows, to come. May our bows be broken and our stiff necks be bent. May our hearts of destruction become hearts of cultivation, our swords be melted to plowshares. May his peace come soon. Even now, Lord Jesus. Even now.

Reflection: The King We Want
By John Tillman

Zechariah’s vision of a coming king riding on a donkey is very familiar to New Testament readers. All the gospel writers include this detail. John and Matthew specifically quote Zechariah 9.9 and point out that Jesus fulfills this prophecy. However, this humble king wasn’t what many wanted. Many rejected Jesus then. And many still reject him now.

The King We Want
We want a king, we say
A king like other nations
With Solomon’s glitz and glamor
With Goliath’s sword and armor

I’ve sent a king, God says
Unlike any you’ve seen
Son of the Giant Killer
Yet rejected as your ruler

We want a king, we say
Exalted and victorious
We’ll hear his saber rattle
We’ll follow him to battle

I’ve sent a king, God says
A king not of this realm
Your lust for worldly power
Shows you mistake the hour

We want a king, we say
To make our city great
To make for ourselves a name
To not be scattered from this plain

I’ve sent a king, God says
You had no eyes to see him
He wept over your city
That the outcasts gained no pity

We want a king, we say
We’ll even take a bad one
Let him speak like a serpent coiled
Long as we can share the spoils

I’ve sent a king, God says
You had no ears to hear him
Of sin’s sting you must repent
Then my King will crush the serpent

We want a king, we say
A conqueror, triumphant
Crush our enemies who slight us
Crush the governments above us

I’ve sent a king, God says
He rode in on a donkey
My servants prophesied him
You rebels crucified him

We want a king, we say
To cast out the unworthy
Keep away those we despise and fear
Isolate us with those we hold dear

I’ve sent a king, God says.
Accepting any and all subjects
No repentant sinner he’ll exclude
And that, my child, includes you

Divine Hours Prayer: The Greeting
You are the Lord, most high over all the earth; you are exalted far above all gods. — Psalm 64.9

Read more about The Ram and the Cornerstone
Jesus entered Jerusalem like Isaac’s ram on the mountain top. He rammed his head into the thorns…Jesus knew he would be rejected. His final actions ensured it.

Read more about Truth Unwanted
Jesus, you are the king, the gift, and the truth that the world does not want. 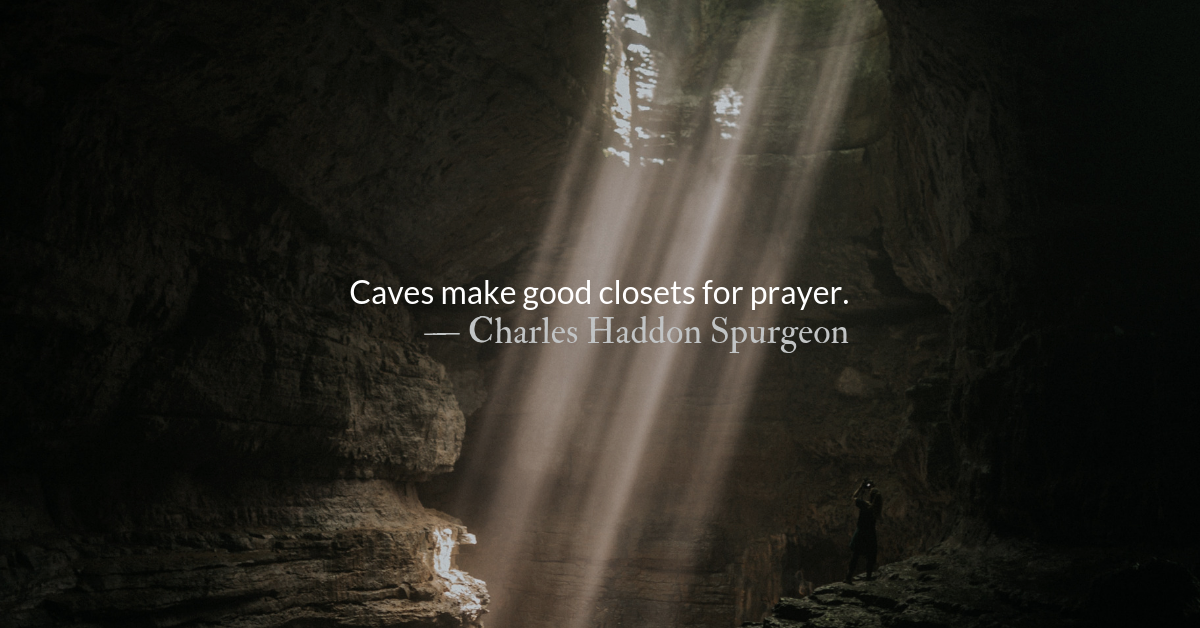 Prayer From the Cave :: Readers’ Choice

Selected by reader, Mrs. DeKuiper from Franklin, TN
As I read this post, my students and I were preparing to visit Mammoth Cave. In preparation for the cave tour, I began shifting from self-focused fear to cave-minded determination to train my heart and body to move strong through the cave. This devotional directly inspired me to become physically ready for the dark, slippery trek as it spiritually reminded me to keep kingdom-focused in my teaching.

Scripture Focus: Psalm 142.1-2
I cry aloud to the Lord;
I lift up my voice to the Lord for mercy.
I pour out before him my complaint;
before him I tell my trouble.

Watching a skilled athlete, chef, or performer may be entertainment for the masses but can be a master class for the observant. “He who has ears to hear, let him hear.”

When we read the Psalms, we observe masters at prayer. If we read with more than a passing glance we can see their technique well enough to improve our own. Like someone analyzing the handgrip of a pinch-hitter may improve his own swing, we can analyze how tightly the psalmist grips the hand of God and do likewise. Like someone noticing the way a champion tennis player shifts her feet in the instant before the serve may adjust his own return technique, we can detect the psalmist’s shift from self-focused complaining to kingdom minded proclamation and train our hearts to move in a new way.

Charles Haddon Spurgeon, in his commentary on Psalm 142 notes the importance of being instructed in prayer in this manner:

“This maschil is written for our instruction. It teaches us principally by example how to order our prayer in times of distress. Such instruction is among the most needful, practical, and effectual parts of our spiritual education. He who has learned how to pray has been taught the most useful of the arts and sciences. The disciples said unto the Son of David, ‘Lord, teach us to pray’ and here David gives us a valuable lesson by recording his own experience as to supplication from beneath a cloud.”

We have but to watch and read the Psalms with careful observation and our own prayers may be approached with new energy, new attitudes, and new aptitudes.

Prayer does not come easier in dark times, but we may feel it does since we more quickly and easily turn to it in distress. Spurgeon also notes that caves, such as the one this psalm is written from, make excellent places to pray:

“Caves make good closets for prayer; their gloom and solitude are helpful to the exercise of devotion. Had David prayed as much in his palace as he did in his cave, he might never have fallen into the act which brought such misery upon his later days.”

Divine Hours Prayer: The Greeting
As the deer longs for the water-brooks, so longs my soul for you, O God. — Psalm 42.1

Submit a Readers’ Choice
Let our community hear how your faith has grown. What post comforted you?

Read more about Prayer from the Belly of the Beast
Prayer and thankfulness seem natural around a table of friends and family. But prayer can be even more powerful in the dark places of our lives.