TBT: A Faith for Others

“Well done, my good servant!’ his master replied. ‘Because you have been trustworthy in a very small matter, take charge of ten cities.” …

Then another servant came and said, “Sir, here is your mina; I have kept it laid away in a piece of cloth.

Then the master said to those standing by, “Take his mina away from him and give it to the one who has ten.”

The Servants
We have, in the first servant, the devoted earnest toiler, whose whole soul was in his Master’s work — great, indeed, was his reward.

Second, we have the servant who acquitted himself fairly respectably, but not nobly, not a hero in the struggle of life. He, too, is recompensed magnificently, far above his most ardent hopes, but still his reward is infinitely below that which the first brave toiler received at his Lord’s hands.

The third falls altogether into a different catalogue. He is a believer who has not found the state of grace offered by Jesus so brilliant as he hoped. He is a legal Christian, who has not tasted grace, and knows nothing of the gospel but its severe morality.

The Hearers
At first the smallness of the sum given to each of the servants is striking [a mina is 1/60 of a talent]. The paltriness of the sum given them seems to suggest what a future lay before Christ’s followers. No sharing in what they hoped for — the glories of a Messianic kingdom on earth. No rest in repose under the shadow of the mighty throne of King Messiah.

The “very little” (ver. 17) told them — if they would only listen — that their future as his servants would be a life of comparatively obscure inglorious activity, without rank or power, landless, homeless, nearly friendless.

The Reward
The reimbursement (at the end of the story) of a city for a pound hints at the magnificent possibilities of the heaven-life — it just suggests the splendor of its rewards.

Prayers from the Past
Helper of men who turn to you,
Light of men in the dark,
Creator of all that grows from seed,
Promotor of all spiritual growth,
Have mercy on me, Lord, on me
And make me a temple fit for yourself.

Images of Faith
Part 4 of 5, read more on TheParkForum.org 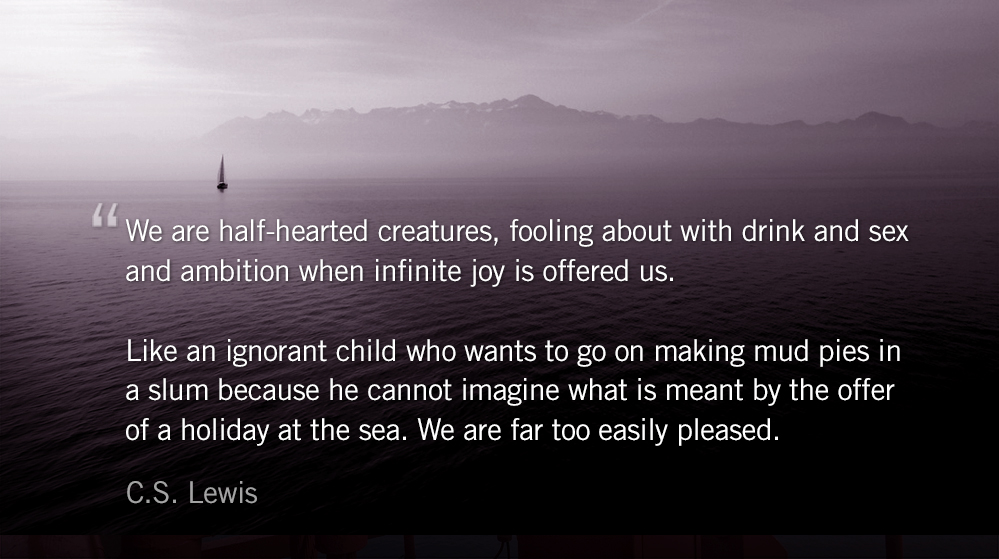 Luke 18.18
A certain ruler asked Jesus, “Good teacher, what must I do to inherit eternal life?”

When Jesus asked about following the Ten Commandments the rich ruler replied, “All these I have kept from my youth.” Jesus had listed the later commandments (do not murder, commit adultery, steal, etc.), which are all outwardly verifiable. Had the rich ruler broken any of them — in a communal society — someone would have spoken up.

The first half of the Ten Commandments (no other gods, observe the sabbath, etc.) are matters of the heart. While they result in outward actions, it is possible to break them without anyone knowing.

The rich ruler was satisfied in his appearance of godliness. Confronted with the darkness of his heart’s true loyalties, he chose to walk away from Christ. Dealing with the reality of his heart would cost him his true god — a price he was unwilling to pay.

The human mind struggles to grasp eternal life; this is confessed through our loyalty to things outside of God. The authors of scripture call this idolatry. Like the rich man, we cling to our idols — wealth, comfort, control, and pleasure — trying to make the most out of this short life even if it costs us the next.

“We are half-hearted creatures, fooling about with drink and sex and ambition when infinite joy is offered us,” C.S. Lewis observes in his book, The Weight of Glory. “Like an ignorant child who wants to go on making mud pies in a slum because he cannot imagine what is meant by the offer of a holiday at the sea. We are far too easily pleased.”

Prayer
Father, shine your light into the darkness of our hearts. Carry us in your grace as you heal us from our selfish pursuits. Give us satisfaction in you which cannot compare to the temporary pleasures and successes of this world.

The Tree in the Sea

Luke 17.6
Jesus said, “If you have faith as small as a mustard seed, you can say to this mulberry tree, ‘Be uprooted and planted in the sea,’ and it will obey you.”

When Jesus wanted to create a picture of the potential of faith, he chose the arduous process of uprooting a tree. Jesus regularly drew teaching examples from his environment, but a tree seems odd for this particular teaching. We like to think of faith solving the world’s greatest problems — poverty, slavery, cancer, mental illness — not performing the tasks of an arborist.

The other image in this teaching is curious as well. The sea is an symbol of chaos and death in ancient Jewish culture. In Jesus’ day the sea was a place of tremendous risk and danger. Everyone knew someone who had gone out to sea and never returned.

“Jesus is not giving us some bizarre image of the impossible,” says Oxford’s Religion and Science Research Director, Andrew Pinset. The story is neither an inspirational image of faith or a condemnation for lack of it (for who has ever been able to use faith to cast a tree into the sea).

The story is about Christ himself. Pinset continues, “Jesus Christ, the mulberry tree, which has being maturing for over a thousand years in the spiritual soil of Israel, will be uprooted and re-planted in the bitter, salt water chaos of paganism.”

A mulberry tree is an image of life. Mulberries start out white and turn blood red when they ripen. Each tree’s root system is vast and complex — taking up to three years to develop to the point where the tree can bear its full fruit.

The New Testament’s writers insist that our world’s greatest problems are solved by faith. Jesus taught that it is not the amount of faith — indeed, it could be as small as a mustard seed — but by the object of our faith that saves.

Christ planted himself in the depths of chaos and evil in our world. He obeyed his father to the point of death and gave his blood to calm the waters in which we suffer.

Prayer
Father, we long for the day that evil, chaos, and death are rebuked and all they have taken is restored. Let us look to you as the one who calms the waters. We pray, as your disciples did, that you would increase our faith.

Images of Faith
Part 2 of 5, read more on TheParkForum.org

Getting Everything You Want

Luke 16.19-21
[Jesus said,] “There was a rich man who was dressed in purple and fine linen and lived in luxury every day. At his gate was laid a beggar named Lazarus, covered with sores and longing to eat what fell from the rich man’s table. Even the dogs came and licked his sores.”

At first it’s easy to separate identity from success. Over time, a person can become radically unaware of themselves apart from any type of success — professional, financial, social, or otherwise.

The rich man in Jesus’ story has no name because his financial success became his identity. Jesus paints a picture of a man who has everything. Although he has done exceptionally well in business and lives in comfort, he soon finds himself in Hades. The parable is careful to note that he is not cast there.

Hades is exactly what the rich man wanted — he structured his life to separate himself from the poor, the meek, and the last.

In the end he discovers what Jesus promises; it is the poor in spirit who receive the Kingdom of Heaven, the meek who inherit the earth, the last who become first.

The rich man’s problem isn’t his success. His disconnection from God and his neighbor in eternity is the result of intentionally withdrawing from them while on earth.

“Hell is the greatest monument in the history of the world to human freedom,” C.S. Lewis says In The Problem of Pain. “What do you want God to do? Forgive them? But they won’t be forgiven,” Lewis continues. “What do you want him to do? Leave them alone? Alas, that’s exactly what he’s going to do.”

Jesus calls his followers to examine their lives. The parable ends without exhortation or summary. (It clearly isn’t a quaint tale to encourage tithing or a concrete description of the afterlife.) As he does time and again, Jesus challenges his followers to use their best time and energy to pursue things far more worthy than worldly success.

One day you’ll get everything you want.

Prayer
Father, root our identity in you. Let us hunger and thirst for your love, truth, and peace in our lives. Open our eyes to the marginalized, the poor, and the meek. Give us wisdom and courage to invite them in from the outside. Show your love for them through us, your Church.

Images of Faith
Part 1 of 5, read more on TheParkForum.org

Exodus 10.3-4
Moses and Aaron went in to Pharaoh and said, “Thus says the LORD, the God of the Hebrews, ‘How long will you refuse to humble yourself before me? … For if you refuse to let my people go, behold, tomorrow I will bring locusts into your country.’”

A swarm of locusts is like a stock market crash in an agrarian society. Locusts descend in an instant, destroying wealth over the longterm and sending the economy into what could be a sustained downturn.

The devastation from just one attack can raze swaths of land. The largest locust swarm on record covered 198,000 square miles (17% larger than the state of California) and contained 12.5 trillion insects.

Longterm destruction from locusts is referred to as “wasted years” in scripture. Months of preparing, planting, and cultivating are laid waste in a moment. The plague in Exodus is seen as a direct result of Pharaoh’s hard heartedness, as well as an attack on the Egyptian god Isis, who was believed to protect them from such plagues.

For Israel, who faced their own locust attacks, locust swarms were believed to be tangible reminders of the devastation caused by a nation’s sin. Years were lost because of their disobedience, brokenness, and rebellion.

God’s character is revealed in how he responds to wasted years. If he were spiteful his response would be callous — a cosmic, “I told you so.” If he were overbearing he would make them worse.

“I will restore to you the years that the swarming locust has eaten,” God promises through the prophet Joel.  It’s a promise that requires divine intervention — for what man can restore what is lost in his darkest hour?

“It is a great wonder; but he is a God of wonders, and in the kingdom of his grace miracles are common things,” Charles Spurgeon told his London congregation in 1886.

In some ways the joy, hope, and renewal found in Christ result in a restoration here and now. Faith in Christ results in a tangible change to the way we engage in the world. In other ways we await the full restoration of all that has been lost. For then our tears will be wiped away, our pain relieved, our brokenness restored, our hearts made whole again.

Prayer
Father, thank you for restoring us through the cross. Thank you that, by grace, you do what we cannot. You bring us life. You restore what sin and brokenness have laid waste. We look to you; we long for you; come quickly, Lord Jesus.

Joy in God
Part 5 of 5, read more on TheParkForum.org