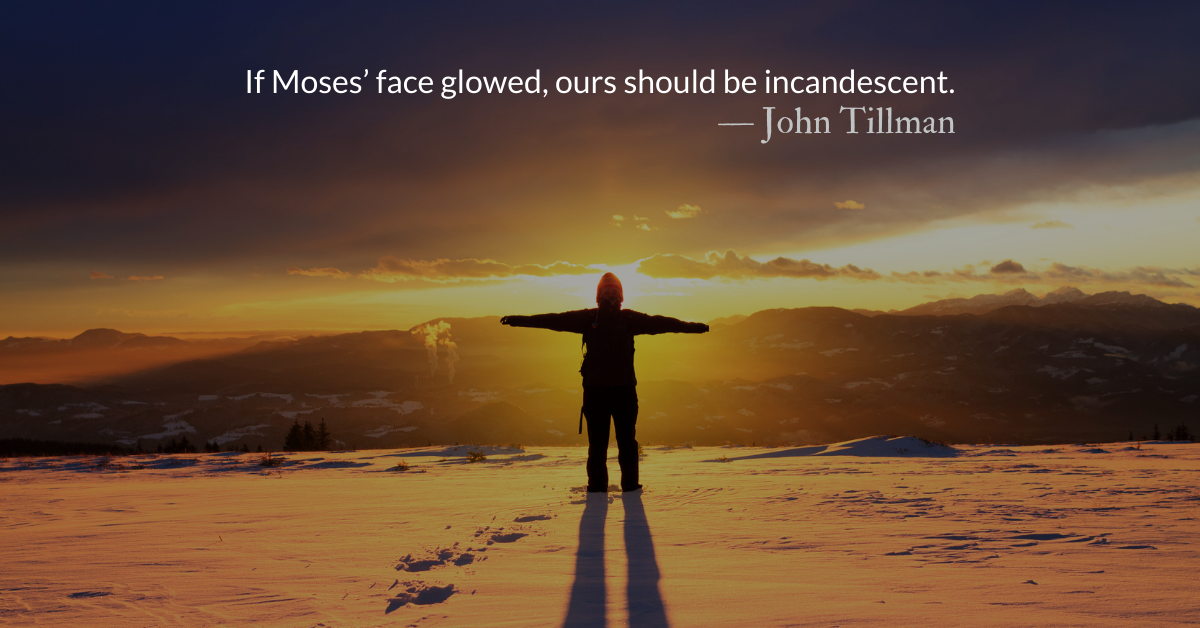 Readers’ Choice Month:
In August, The Park Forum looks back on our readers’ selections of our most meaningful and helpful devotionals from the past 12 months. Thank you for your readership. This month is all about hearing from you. Submit a Readers’ Choice post today.

Today’s post was originally published, March 23, 2021, based on readings from Exodus 34 and John 13.
It was selected by reader, MT from Texas
Beautiful.

Scripture Focus: Exodus 34.29-30, 33-35
29 When Moses came down from Mount Sinai with the two tablets of the covenant law in his hands, he was not aware that his face was radiant because he had spoken with the Lord. 30 When Aaron and all the Israelites saw Moses, his face was radiant, and they were afraid to come near him.
33 When Moses finished speaking to them, he put a veil over his face. 34 But whenever he entered the Lord’s presence to speak with him, he removed the veil until he came out. And when he came out and told the Israelites what he had been commanded, 35 they saw that his face was radiant. Then Moses would put the veil back over his face until he went in to speak with the Lord.

John 13.3-5
3 Jesus knew that the Father had put all things under his power, and that he had come from God and was returning to God; 4 so he got up from the meal, took off his outer clothing, and wrapped a towel around his waist. 5 After that, he poured water into a basin and began to wash his disciples’ feet, drying them with the towel that was wrapped around him.

On Mount Sinai, God revealed more to Moses than he had revealed to any human since Adam and Eve.

This revelation changed Moses in ways he did not immediately realize. Moses had been to the mountain before for long conversations with God. He took down detailed plans for the tabernacle with instructions right down to the fasteners of clothing. Something, however, about this visit was different.

The intimacy of the revelation of God’s character, of glimpsing God’s glory from the cleft of the rock, gave Moses a glow. The people, and even Aaron, were afraid of this radiant sign of God’s presence. So Moses veiled his face. This seems to have been merely for the comfort of others.

Seeing the glory of God can be discomforting. But Moses and Israel hadn’t seen anything yet…
The revelation of God’s character when Jesus stripped to his undergarments to wash his disciples’ feet, was like no other revelation before. When John described this moment he prefaced it by telling us that Jesus “showed them the full extent of his love.” (John 13.1)

No revelation of God and his love, not the original creative acts that formed the universe, not the choosing of Abram, or the salvation from Egypt, is complete without this image.

Discomforted by the foot washing, Peter tries to stop Jesus from humiliating himself. Jesus is not about to let Peter draw a covering over the love he intends to show. He is mere hours away from the tearing of his flesh and the tearing of the curtain of the Temple. Peter hadn’t seen anything yet…

Paul describes New Testament believers as those with “unveiled faces.” He encourages us that if Moses’ ministry was glorious, our ministry should be more so. (2 Corinthians 3.7-17) If Moses’ face glowed, ours should be incandescent.

Seek regular and deep intimacy with God through prayer and the scriptures. Let the shocking images of his identity—from Sinai, from foot washing, from the cross—soak into us. Then, let us walk through our world alight with his love. For when it comes to what God will reveal to us, and the love we will show the world, we haven’t seen anything yet. (Ephesians 3.14-21)

Divine Hours Prayer: The Request for Presence
Gladden the soul of your servant, for to you, O Lord, I lift up my soul. — John 10.17-18

Read More about Readers’ Choice 2021
Have we heard from you yet? Tell us about posts from the past year (September 2020 – July 2021) that have helped you in your faith.

Read more about Apocalypse, How?
We have apocalypses all wrong…Jesus told his disciples that he would “apocalypse” the father to them, meaning that he would reveal to them God the Father.