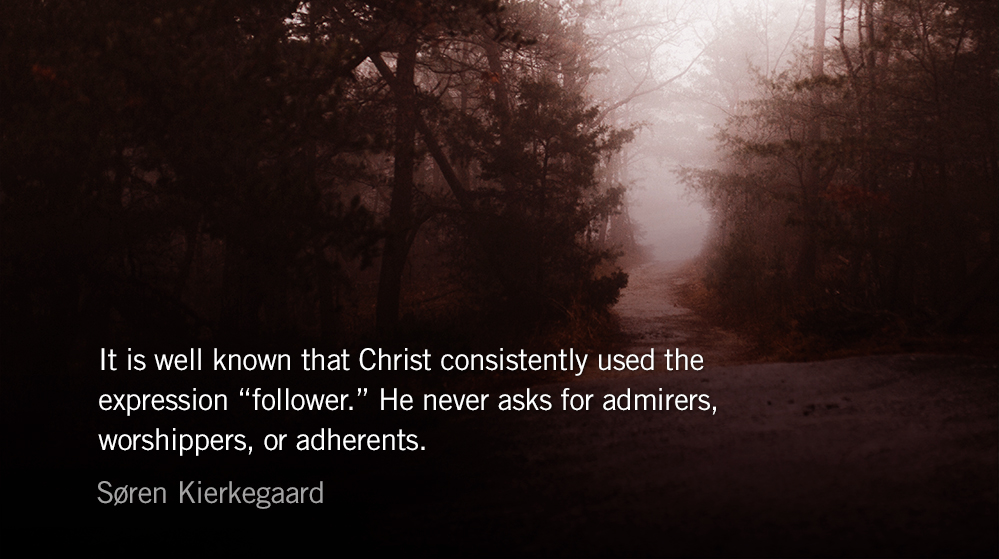 To Walk as a Follower of Christ

The admirer never makes any true sacrifices. He always plays it safe. Though in words, phrases, songs, he is inexhaustible about how highly he prizes Christ, he renounces nothing, gives up nothing.

I will pay my vows to the Lord in the presence of all his people, in the courts of the house of the Lord, in your midst, O Jerusalem. Praise the Lord!

Reflection: To Walk as a Follower of Christ
By Søren Kierkegaard

It is well known that Christ consistently used the expression “follower.” He never asks for admirers, worshippers, or adherents. No, he calls disciples. It is not adherents of a teaching but followers of a life Christ is looking for.

Christ came into the world with the purpose of saving, not instructing it. At the same time—as is implied in his saving work—he came to be the pattern, to leave footprints for the person who would join him, who would become a follower. This is why Christ was born and lived and died in lowliness.

It is absolutely impossible for anyone to sneak away from the Pattern with excuse and evasion on the basis that It, after all, possessed earthly and worldly advantages that he did not have. In that sense, to admire Christ is the false invention of a later age, aided by the presumption of “loftiness.” No, there is absolutely nothing to admire in Jesus, unless you want to admire poverty, misery, and contempt.

When there is no danger, when there is a dead calm, when everything is favorable to our Christianity, it is all too easy to confuse an admirer with a follower. And this can happen very quietly. The admirer can be in the delusion that the position he takes is the true one, when all he is doing is playing it safe.

With my whole heart I seek you; let me not stray from your commandments. —Psalm 119:10