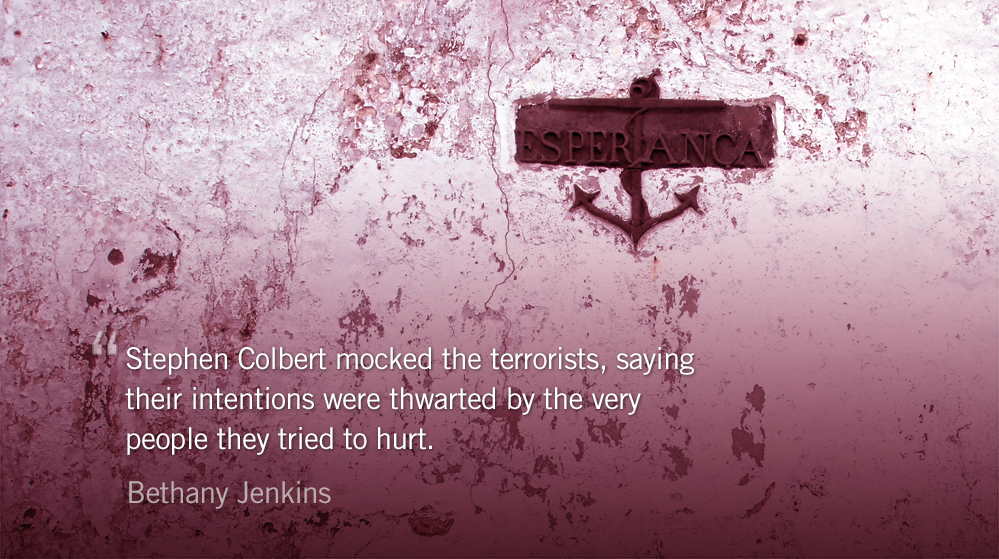 “‘The glory of grace’ is something I somehow manage to overlook in daily life. How amazing that God would give his only Son for me? That the pain of my sin would fall on his shoulders? And yet, He loves me. He loves me.” — Anna

After the Boston Marathon bombings, Stephen Colbert mocked the terrorists, saying their intentions were thwarted by the very people they tried to hurt: “But here is where these cowards really don’t get. They attacked the Boston Marathon. An event celebrating people who run twenty-six miles on their day off … And when those bombs went off, there were runners who, after finishing a marathon, kept running for another two miles to the hospital to donate blood. So here’s what I know. These maniacs may have tried to make life bad for the people of Boston, but all they can ever do is show just how good those people are.”

In Psalm 33, the Psalmist sings, “The Lord brings the counsel of the nations to nothing; he frustrates the plans of the peoples. The counsel of the Lord stands forever, the plans of his heart to all generations.” Thousands of years ago, “lawless men” sought to silence the King of Glory, but God frustrated their plans.

As Peter said, “Jesus of Nazareth, a man attested to you by God with mighty works and wonders and signs that God did through him in your midst, as you yourselves know—this Jesus, delivered up according to the definite plan and foreknowledge of God, you crucified and killed by the hands of lawless men. God raised him up, loosing the pangs of death, because it was not possible for him to be held by it.”

In Spectacular Sins, John Piper writes, “In the death of Christ, the powers of darkness did their best to destroy the glory of the Son of God. This is the apex of evil. But instead they found themselves quoting the script of ancient prophecy and acting the part assigned by God. Precisely in putting Christ to death, they put his glory on display—the very glory that they aimed to destroy. The apex of evil achieved the apex of the glory of Christ. The glory of grace.”

Prayer
Lord, although much about the bombings in Boston remains a mystery to us, we know one thing—when we see terrorists try to spread fear and hatred and, instead, spread love and compassion, we see your glory. No plan of yours can be thwarted—not even when evil appears to have won. Give us a vision for spectacular sins that achieve the apex of Christ’s glory. Amen.