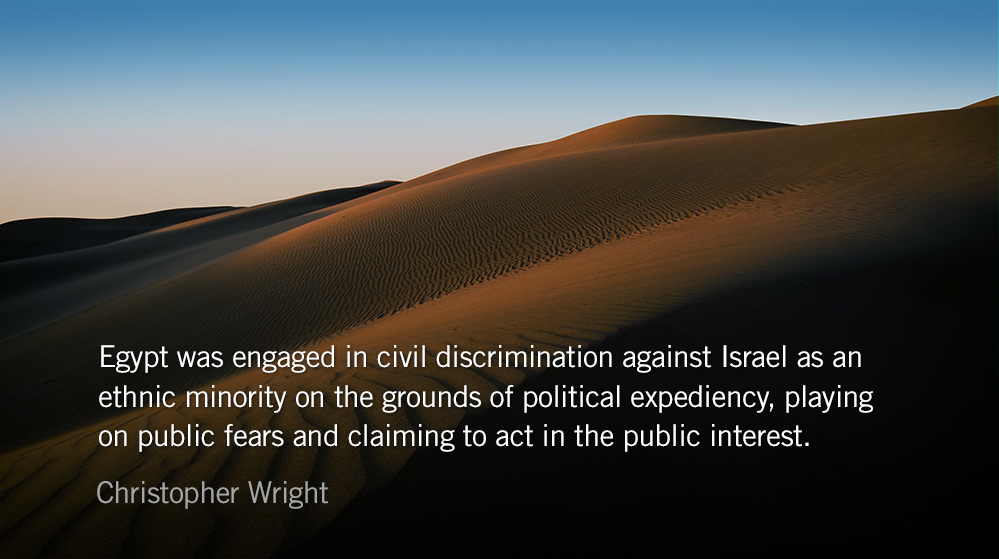 Sinai stands significantly midway between liberation from Egypt and settlement in Canaan. Liberation was not an end in itself.

Afterward Moses and Aaron went and said to Pharaoh, “Thus says the Lord, the God of Israel, ‘Let my people go, that they may hold a feast to me in the wilderness.’”

Reflection: Of God and State
By Christopher Wright

The People of God begin this period as an oppressed ethnic minority within a very powerful imperial state. The demand of Yahweh confronts Pharaoh: ‘Let my people go that they may worship/serve me.’ A state which denies freedom to those who wish to worship Yahweh finds itself Yahweh’s enemy.

The God who, in the patriarchal narratives, had shown himself to be transcendent in the sense that he was neither bound to, nor very impressed by, the greatest of human imperial civilization, upholds the right of his people to freedom of worship in the midst of a state with other gods, including the pharaoh himself.

His demands go much further than the spiritual right of freedom of worship. Egypt was engaged in civil discrimination against Israel as an ethnic minority on the grounds of political expediency, playing on public fears and claiming to act in the public interest. They were engaged in economic exploitation of this pool of captive labour. And they were guilty of gross violation of normal family life through a policy of state-sponsored genocide. On all these fronts Yahweh demanded and then achieved the liberation of his people.

In the course of events, the state, which had professed ignorance of who Yahweh is, learns his identity and his power in no uncertain terms. Indeed the process of Egypt’s move from ignorance to acknowledgment of Yahweh is undoubtedly one of the sub-plots of the narrative (*1).

The claims of Pharaoh and the other gods of the state must bow to the fact that Yahweh is God as much over Egypt as over Israel, his own people. The climax of the song of Moses, after the sea had sealed the reality of Israel’s deliverance, celebrated that Yahweh is king, for ever; and not, it was implied, Pharaoh.

*Excerpt from Christopher J. H. Wright, The People of God and the State in the Old Testament.

My lips will sing with joy when I play to you, and so will my soul, which you have redeemed. — Psalm 71:23