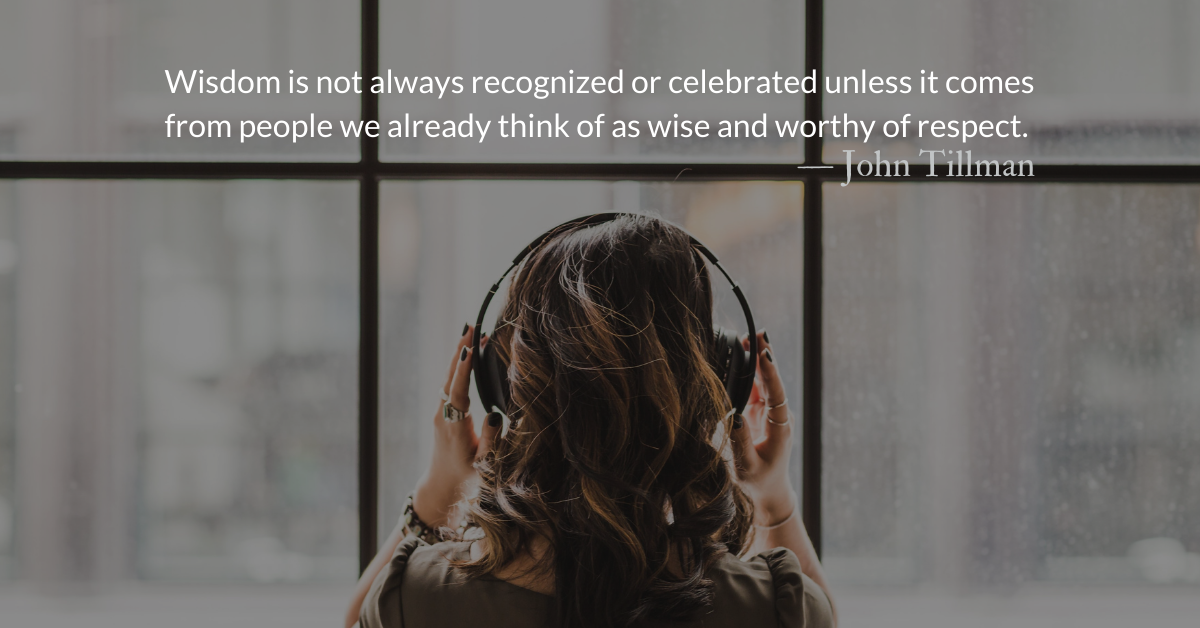 Scripture Focus: Ecclesiastes 9.13-18
13 I also saw under the sun this example of wisdom that greatly impressed me: 14 There was once a small city with only a few people in it. And a powerful king came against it, surrounded it and built huge siege works against it. 15 Now there lived in that city a man poor but wise, and he saved the city by his wisdom. But nobody remembered that poor man. 16 So I said, “Wisdom is better than strength.” But the poor man’s wisdom is despised, and his words are no longer heeded.
17 The quiet words of the wise are more to be heeded
than the shouts of a ruler of fools.
18 Wisdom is better than weapons of war,
but one sinner destroys much good.

Who was this nameless poor man who saved his city from military aggression? What did he do? How did it save the city? We don’t know. That’s the point the teacher is trying to make. Wisdom is not always recognized or celebrated unless it comes from people we already think of as wise and worthy of respect.

The poor were then and are now considered by many to be unreliable, lazy, morally questionable. Even today, many people doubt the poor when they tell us about their own experiences. “Don’t give them money. They can’t be trusted.” Perhaps the better question we should ask is, who was the person in power who listened to the wisdom of the poor man? And how was he forgotten after wisdom he shared, saved the city?

We often distrust the word of “nobodies.” When a recommendation, a critique, or an accusation is spoken we often say, “Who is this?” Buried in that question are assumptions. We distrust people based on status. We are suspicious of critiques from those “below” us who we suspect have inferior understanding. Positional distrust can cut across many categories such as authority, status, wealth, age, race, gender, or denominational or political affiliation. “Her word isn’t trustworthy. She’s _________.” “Don’t listen to him. He’s _________.” It can cause us to read wisdom and call it foolishness. It can cause us to hear a blustering fool and call him wise.

The teacher describes the king of the city as blustering and shouting and says fools followed him. In contrast, the wise words of the poor man were quiet. Whatever weapons were bested by the poor man’s wisdom, they weren’t bested by force, volume, or vicious rhetoric. We would do well to retune our ears to listen for such quiet, yet powerful words.

Many places in our world are under siege—some literally, some metaphorically. Violent voices of brash, blustering, chest-beating, powerful leaders of our world shout out plans, war strategies, and lies.

May we listen to the lowly voices God chooses to send to us, speaking wisdom.
May we ask the Holy Spirit to give us ears to hear quiet wisdom that can silence weapons of war.
May we honor those who speak God’s quiet wisdom, both now and in the future.
May quiet wisdom be remembered long after the siege ramps of the violent are crumbling in dust.

*On March 25th, nine months before Christmas day, the church celebrates the lowly voice of Mary after hearing Gabriel’s announcement. We read her words as our prayer today.

Divine Hours Prayer: A Reading
My soul proclaims the greatness of the Lord, my spirit rejoices in God my Savior;
For he has looked with favor on his lowly servant… — Luke 1.46-48

Read more about Servants in the Age of Showboats
We live in an age where the proud, unethical, immoral showboat leader is honored and glorified.

Read more about In The Face of Wonder
The freedom the world seeks is freedom to dominate, dictate, and destroy…May we seek instead the freedom to serve, to create, and to restore.