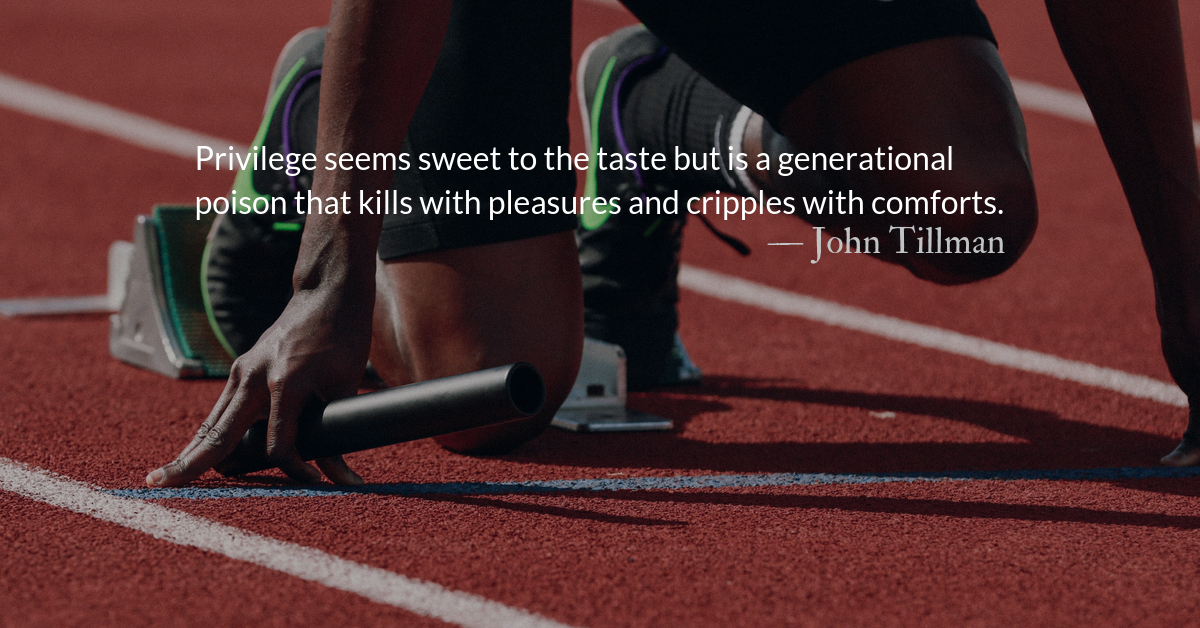 The Poison of Privilege

Scripture Focus: 1 Kings 12.8, 14
But Rehoboam rejected the advice the elders gave him and consulted the young men who had grown up with him and were serving him…he followed the advice of the young men and said, “My father made your yoke heavy; I will make it even heavier. My father scourged you with whips; I will scourge you with scorpions.”

Philippians 3.18-20
For, as I have often told you before and now tell you again even with tears, many live as enemies of the cross of Christ. Their destiny is destruction, their god is their stomach, and their glory is in their shame. Their mind is set on earthly things. But our citizenship is in heaven.

Reflection: The Poison of Privilege
By John Tillman

Privilege seems sweet to the taste but is a generational poison that kills with pleasures and cripples with comforts.

Solomon is a second generation leader. He begins his career with a position David spent a lifetime getting to. It is as if he is running the 800 meters with his starting blocks placed in the final curve instead of at the start.

Rehoboam is a third generation leader. If Solomon’s privilege is analogous to running the last 100 meters of the 800, Rehoboam’s is analogous to taking a victory lap and standing on the winner’s stand without committing a disqualification. He could not manage it.

Privilege can grow generationally. Rehoboam says to his subjects who begged for relief from Solomon’s high taxes and enforced labor, “my little finger is bigger than my father’s waist…”

It is not only King David’s grandson who is engorged with selfishness. Rehoboam’s companions of his own age are equally entitled, disrespectful, and self-focused. It is these men who craft Rehoboam’s harsh message:

“My father scourged you with whips. I will scourge you with scorpions”

These young men could quickly find employment as social media managers for many of today’s disrespectful and autocratic leaders. How do individuals become so bloated by entitlement, privilege, and selfishness?

It is natural and good that parents dream their children might have a better and more prosperous life than their own. Parents can act as servants, subjugating their own needs, desires, dreams, and goals to advance opportunities for their children. But children who benefit from sacrifice don’t always catch the lesson that they should become people who sacrifice. They can become accustomed to their level of privilege, their level of wealth, their level of power. They can develop an identity connected to their advantages and possessions.

In Rome, slaves often rode behind great leaders after a victory, whispering, Memento mori—Remember you will die. It was intended to inspire humility but we need more than this simple reminder. Awareness of mortality does not guarantee morality. Another popular saying in Rome was “Eat and drink, for tomorrow we die.”

Christianity gives meaning to mortality and recognizes privilege and power as what it is—poison for the soul. Rather than accumulate earthly privilege, Paul encourages the believers to remember that our citizenship is in heaven and our model is Christ.

Anyone (of any generation) who does not learn to serve like Jesus, giving up rights, position, and power will end on a path of self-worship and eventual destruction.

Read more about Gospel Faith or Garbage Faith
Even with all that he had achieved, once he met Christ, Paul realized everything prior was waste, rubbish, by comparison.

Read more about Born to Serve
Paul describes who Christ is, and by extension, who God is, and furthermore by example, who we should be.