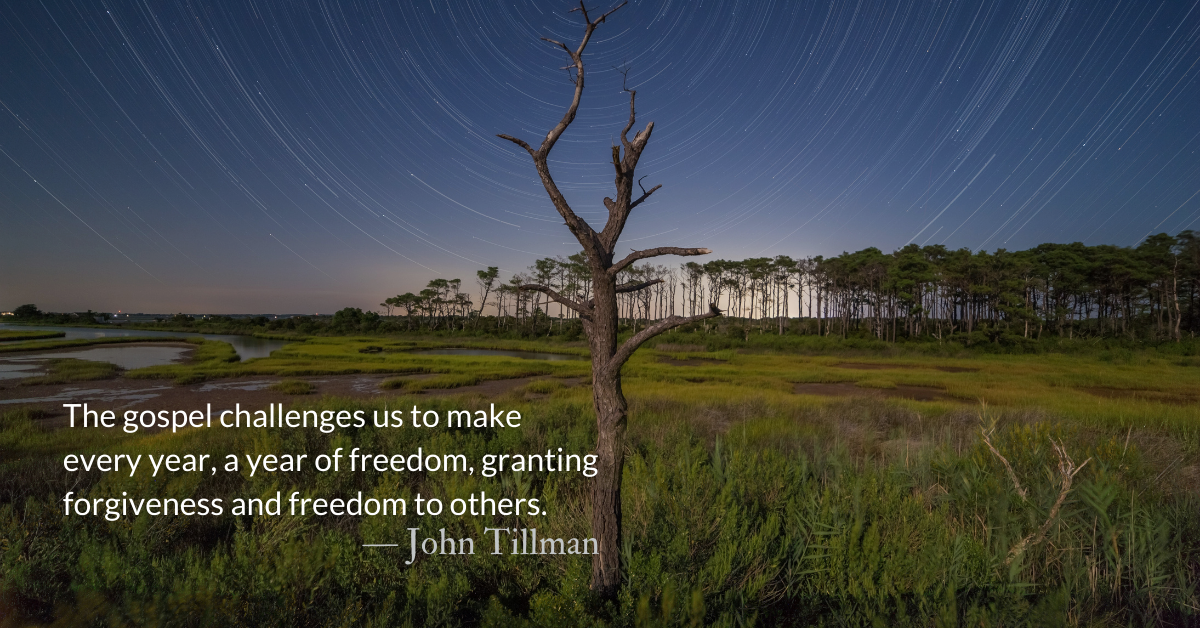 The Gospel and the Year of Freedom

Scripture Focus: Ezekiel 46.18
18 The prince must not take any of the inheritance of the people, driving them off their property. He is to give his sons their inheritance out of his own property, so that not one of my people will be separated from their property.’ ”

Reflection: The Gospel and the Year of Freedom
By John Tillman

The “year of freedom” refers to the system of Jubilee described first to those entering the promised land. It first divided the land equitably, and then ensured that ownership would reset after a period of years, each family receiving back property lost or sold, being released from indentured servanthood, and being forgiven debts.

The brown-skinned authors of scripture did not write under the inspiration of the Holy Spirit in order to endorse or condemn economic theories that would be created by white men centuries later. As much as partisans might like it to be, the system of Jubilee is not an endorsement or condemnation of collectivism or individualism. Many current economic and political practices have points of friction with scripture.

Scripture challenges and convicts all man-made systems, governments, and economic practices of their errors and hubris. Approaching scripture with an eye toward self-correction rather than self-justification should be our default setting.

The theological basis for the concept of Jubilee was that the land belonged to the Lord, not the people. (Leviticus 25.23) Therefore, since they were “aliens and strangers.” The people could “possess” the land with the Lord but could not claim to own the land and neither could their leaders.

May we pray over and reflect upon a few things described or implied by Jubilee and Ezekiel’s new city of God:
We don’t own anything even if we possess it.
Equity is the default setting of God’s spiritual economy.
Leaders (princes) must set an example, creating fairness and justice.

Our prince, Jesus, sets our example. He owned everything but lived as though he owned nothing. He laid down his rights as king, taking up the cross.
He had sympathy for the unsympathetic. (That’s us.)
He canceled the debts of those who deserved no mercy. (Also us.)
He restored those whose lives had been wasted by their own choices. (Us, again.)

The gospel challenges us to make every year, a year of freedom, granting forgiveness and freedom to others.

May we seek out unsympathetic failures and undeserving debtors and may we show them the same mercy given to us. (Matthew 18.21-35) In this way, we can make every year (even 2020) a “year of freedom.”

Divine Hours Prayer: The Refrain for the Morning Lessons
Yours are the heavens; the earth also is yours, you laid the foundations of the world and all that is in it. — Psalm 89.11

Read more about Unsurprising Oppression
“Therefore I command you to be openhanded toward your fellow Israelites who are poor and needy in your land.”

Read more about A Cry to God for the Poor from Zimbabwe
You spoke to the children of Israel saying there should not be poor among them. You instituted the Years of Jubilee and Sabbath.