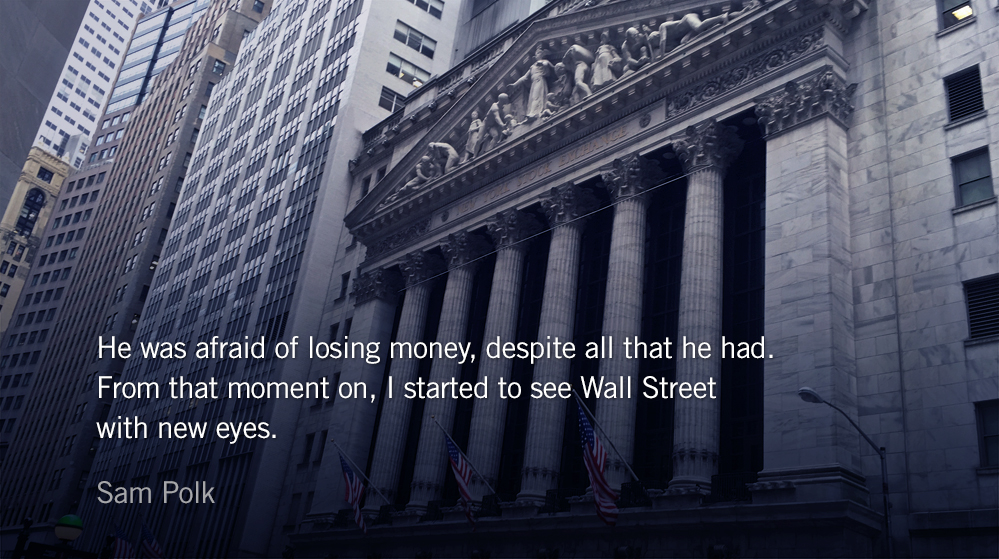 He who loves money will not be satisfied with money, nor he who loves wealth with his income; this also is vanity. — Ecclesiastes 5.10

“In my last year on Wall Street my bonus was $3.6 million—and I was angry because it wasn’t big enough,” writes Sam Polk in the New York Times. “I was 30 years old, had no children to raise, no debts to pay, no philanthropic goal in mind. I wanted more money for exactly the same reason an alcoholic needs another drink: I was addicted.”

Polk’s story reads like a modern-day reenactment of Ecclesiastes. “I said in my heart,” the author of the ancient book of wisdom confesses, “Come now, I will test you with pleasure; enjoy yourself.” The pursuits of money, power, and pleasure feel so wonderful in the short-term—and our society is engineered to deliver such rewards, on demand, to anyone willing to chase after them with reckless abandon. Polk confesses:

I felt so important. At 25, I could go to any restaurant in Manhattan—Per Se, Le Bernardin… I could be second row at the Knicks-Lakers game… The satisfaction wasn’t just about the money. It was about the power. Because of how smart and successful I was, it was someone else’s job to make me happy.

Ecclesiastes concludes, “But behold, this also was vanity.” Polk, following in the footsteps of many before him, would discover this for himself:

In the end, it was actually my absurdly wealthy bosses who helped me see the limitations of unlimited wealth… They were talking about the new hedge-fund regulations. Most everyone on Wall Street thought they were a bad idea. “But isn’t it better for the system as a whole?” I asked. The room went quiet, and my boss shot me a withering look. I remember his saying, “I don’t have the brain capacity to think about the system as a whole. All I’m concerned with is how this affects our company.”

I felt as if I’d been punched in the gut. He was afraid of losing money, despite all that he had. From that moment on, I started to see Wall Street with new eyes.

The calling of Scripture is to see wealth and power, in Polk’s words, with new eyes. Those whose view of vocation has been redeemed, Ecclesiastes says, “eat and drink, and find enjoyment in all their hard work on earth during the few days of their life which God has given them, for this is their reward.”