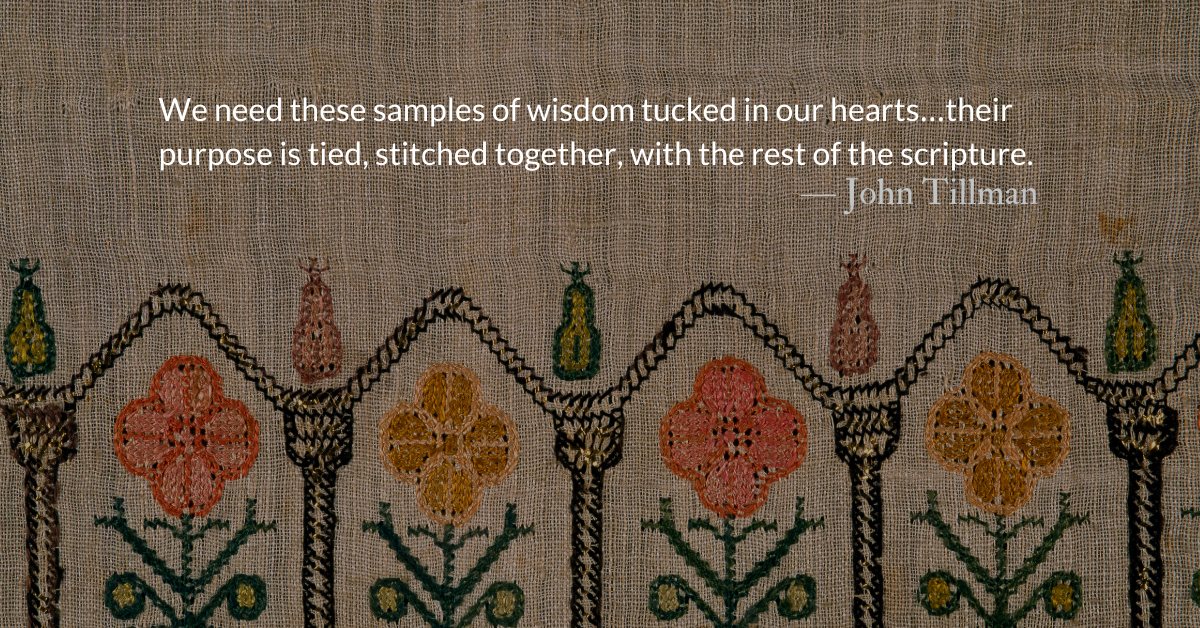 Scripture Focus: Proverbs 1.1-7
1 The proverbs of Solomon son of David, king of Israel:
2 for gaining wisdom and instruction;
for understanding words of insight;
3 for receiving instruction in prudent behavior,
doing what is right and just and fair;
4 for giving prudence to those who are simple, d
knowledge and discretion to the young—
5 let the wise listen and add to their learning,
and let the discerning get guidance—
6 for understanding proverbs and parables,
the sayings and riddles of the wise. i
7 The fear of the Lord is the beginning of knowledge,
but fools despise wisdom and instruction.

Proverbs are often treated as independent nuggets of wisdom. As slogans of godliness or morality, they are seen frequently on tee-shirts, on bumper stickers, and on cross-stitch patterns called samplers.

Samplers were originally a way for people to store knowledge. Complex and beautiful stitches would be placed on a scrap or long strip of material. Complex stitches and the simpler stitches that were needed to create them would be placed side by side to be referenced for future work. The first samplers were tucked in drawers or pockets not hung on walls. Samplers gradually became more than just a filing system of stitching knowledge and became a kind of simple artwork of their own.

Samplers became connected to education and morality, especially in the United States. Children stitched the alphabet or moral sayings to aid memorization and to instill values while also learning a valuable decorative skill.

Today, the idea that samplers contained wisdom is played for irony by generations that are equally cynical and whimsical. Samplers can be found now with quotes from Star Wars, Anime films, and many other fandoms. Rather than a disdain for wisdom, this shows that our culture is crying out for wisdom. Wise sayings can be found in many forms and places. True wisdom, however, has its purest and greatest source in God. The well from which we can draw God’s wisdom is found in scripture.

Proverbs, like many statements pulled from the Bible, have meaning that goes beyond a surface interpretation. Proverbs are like pools that at first seem like shallow puddles—until you look deeper.

We need to take the time to look beyond the simple reading of sayings. Let us sit by these pools of wisdom and gaze deeply. Look for the patterns. Read them repetitively as they would have been read to a non-reading culture being educated by rote memorization. Read them long enough that you begin to see and recognize their interconnectedness both with the proverbs before and behind them and all across the scriptures.

We need these samples of wisdom tucked in our hearts. Like a lone stitch in a scrap of material, they might not seem beautiful or useful. We need to remember that their purpose is tied, stitched together, with the rest of the scripture. Proverbs aren’t intended to stand alone but to pull together a beautiful tapestry of God’s wisdom.

Divine Hours Prayer: A Reading
Jesus taught the people, saying: “You have heard how it was said: “Eye for eye and tooth for tooth.” But I say to you: offer no resistance to the wicked. On the contrary, if anyone hits you on the right cheek, offer him the other as well; if someone wishes to go to law with you to get your tunic, let him have your cloak as well.” — Matthew 5.38-41

Read more about Unhurried Wisdom
Wisdom is not a character trait abruptly gained. In our quick paced world, we forget to think before we speak.

Read more about Mining for Wisdom
The fear of the Lord is the apex of spiritual mining…as the miner studies the formations of the earth…all pursuits of wisdom begin with…God.