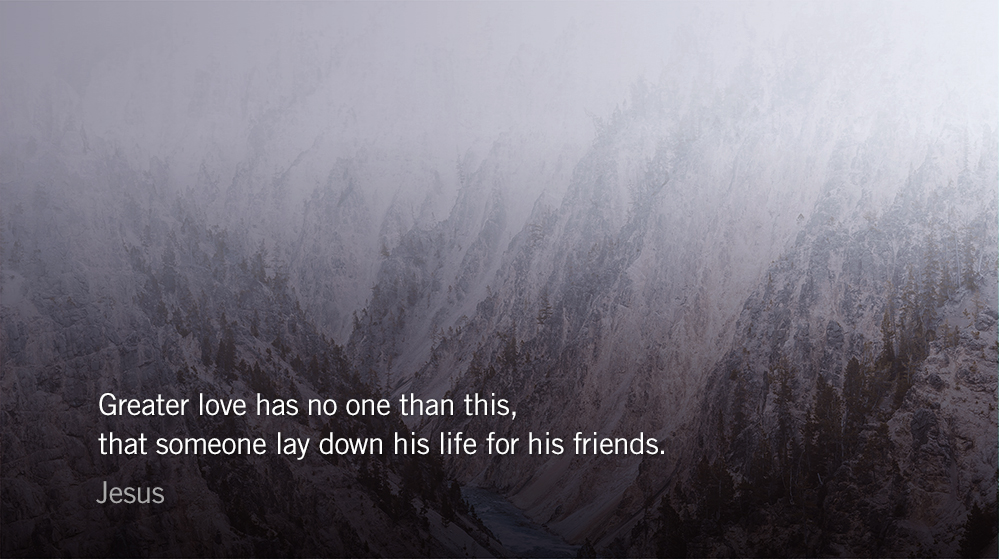 Greater love has no one than this, that someone lay down his life for his friends.

“If your brother becomes poor and cannot maintain himself with you, you shall support him as though he were a stranger and a sojourner, and he shall live with you.”

“There are two slightly different versions of the story,” notes religious historian Katell Berthelot of the cultural tradition behind Leviticus’ instruction to help one’s poor brother. Ancient Jews would have known one version from the Talmud and an earlier version from Sifra, a midrash on the book of Leviticus:

That your brother may live with you:
This is what Ben Peturi taught: The story of two persons who were traveling in a desert, and only one of them has a canteen of water. If only one of them drinks, he can reach civilization, but if both drink, both of them die.

Ben Petiri taught: Let them both drink and die, as it is said: That your brother may live with you.

[But,] Rabbi Aqiba told him: That your brother may live with you, means that your life takes precedence over the life of your companion.

A possibility not taken into account in the dialogue between Ben Peturi and Rabbi Aqiba—that the one who owns the water voluntarily surrender it to the other person in order to save the latter’s life at the cost of his own.

At least in some cases, giving one’s life for a true friend or a revered teacher would probably be considered worthy of praise in both the Greco-Roman world and the rabbinic tradition, but it is never an obligation.

As affluent westerners we likely picture ourselves as the brother who has the means of salvation (how colonial of us). Yet the book of Leviticus, like the rest of the Pentateuch, reminds us that we are the ones hopelessly lost and in need of living with another.

We celebrate Christ because he was the brother who chose to lay down his life to live with us—pouring out all he had that we might find life. This reality forms not only the basis of salvation through Christ, but the foundation on which the Christian embrace refugees is built. For, Scripture reminds us, Christ will one day look upon those he gave himself for and say, “As you did it to one of the least of these my brothers, you did it to me.”

Prayer: The Cry of the Church

O God, come to my assistance! O Lord, make haste to help me!