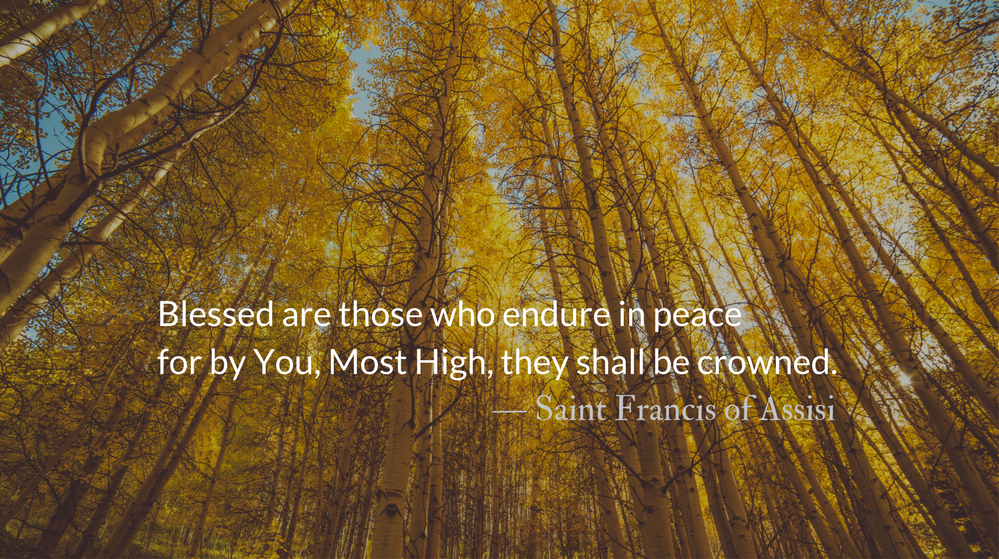 From Privilege to Prisoner to Priest

Scripture: Ephesians 4:1-2
As a prisoner for the Lord, then, I urge you to live a life worthy of the calling you have received. Be completely humble and gentle; be patient, bearing with one another in love.

Many churches in the United States celebrate the Feast of St Francis of Assisi on October 4 each year. The feast commemorates the life of St Francis, who was born in the 12th century. Jon provides us an excellent reflection on today’s reading in Ephesians drawn from events of Francis’s life.

Reflection: From Privilege to Prisoner to Priest
By Jon Polk

St. Francis of Assisi is generally known for his peaceful disposition and love for animals and nature. The Prayer of St. Francis (authorship uncertain, but often attributed to Francis) begins,

However, this devoted follower of Christ, widely regarded for his vow of poverty, did not begin life in a humble way. Francis was born in Italy around 1181 to a wealthy cloth merchant and his beautiful French wife. By age 14, Francis, spoiled by luxury, dropped out of school and gained a reputation as a rebellious teen, known for drinking, partying, and vanity.

His privileged upbringing afforded him training in archery and horsemanship and when war broke out in 1202, he joined the cavalry. Having no combat experience, Francis was easily captured by opposing forces and imprisoned for a year before ransom was negotiated.

But during his time as a prisoner of war, Francis began to receive visions from God and arrived home a changed man. He turned his heart towards God and spent time in prayer, seeking direction.

Eventually he felt the call of Christ to serve the Church and to live a life of extreme poverty—fully devoted to Christianity. He is considered by many to be one of the purest examples of living the Christian life, other than Jesus himself.

Certainly, Francis embodies Paul’s encouragement to the Ephesians to “live a life worthy of the calling you have received” and to “be completely humble and gentle.”

Francis’ deep dedication and gratitude to God is seen expressed in these excerpts from a song he composed, Canticle of the Sun. May these words guide our worship and service to Christ.

Most High, all powerful, good Lord,
Yours are the praises, the glory, the honor,
and all blessing.

To You alone, Most High, do they belong,
and no man is worthy to mention Your name.

Blessed are those who endure in peace
for by You, Most High, they shall be crowned.

Woe to those who die in mortal sin.
Blessed are those whom death will
find in Your most holy will,
for the second death shall do them no harm.

Praise and bless my Lord,
and give Him thanks
and serve Him with great humility.

The Refrain
The Lord is near to those who call upon him, to all who all upon him faithfully.