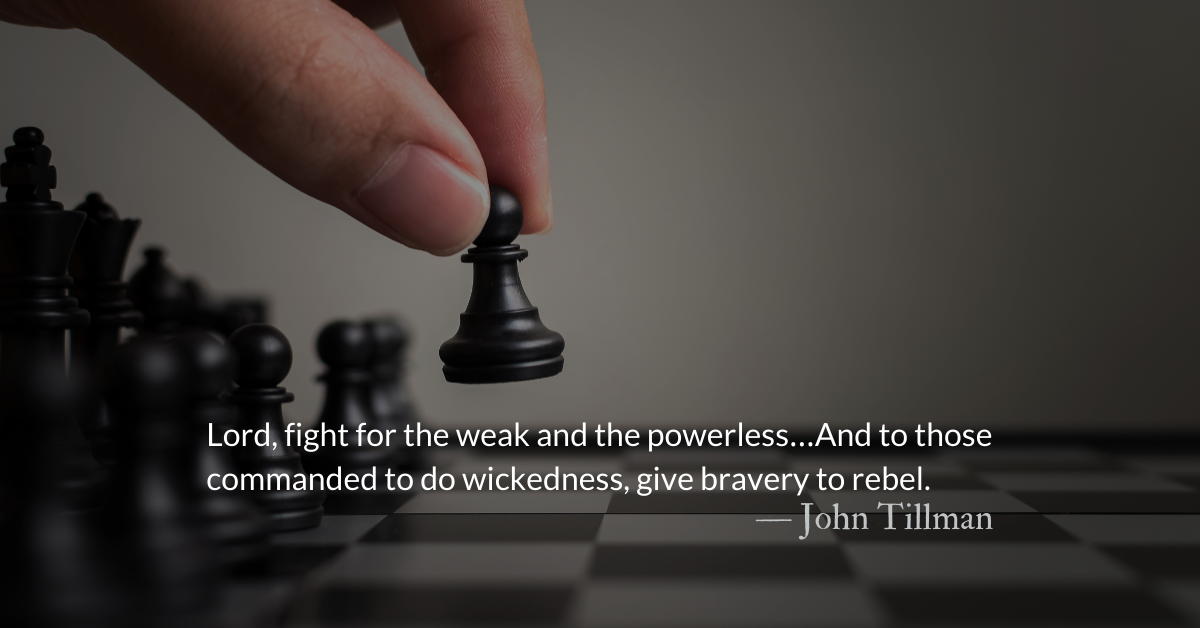 Prayer for the Poor at War

Scripture Focus: Proverbs 22.1-2, 4, 7-9, 16
1 A good name is more desirable than great riches;
to be esteemed is better than silver or gold.
2 Rich and poor have this in common:
The LORD is the Maker of them all.

4 Humility is the fear of the LORD;
its wages are riches and honor and life.

7 The rich rule over the poor,
and the borrower is slave to the lender.
8 Whoever sows injustice reaps calamity,
and the rod they wield in fury will be broken.
9 The generous will themselves be blessed,
for they share their food with the poor.

16 One who oppresses the poor to increase his wealth
and one who gives gifts to the rich—both come to poverty.

Reflection: Prayer for the Poor at War
By John Tillman

Today’s section of proverbs has many reflections on the relationship of the rich to the poor.

During the American Civil War, men could avoid conscription into the military for a fee of $300. That would be approximately $9,500 in today’s currency. The adage “rich man’s war, poor man’s fight” originated at this time. This “proverb” has remained a popular way of expressing the fact that most nations are led to war by the rich and most who die are poor.

United States military forces have been volunteer-only since 1973 but conscription (called the draft) could be reactivated if national security demanded it. Despite being a volunteer force, the US Armed Forces are still mostly filled by those from lower economic backgrounds, so the adage is still true.

In other nations, practices vary, but it has become clear in the early days of the Russian invasion of Ukraine that many captured Russian soldiers are conscripts and some of them were unaware of where they were being sent and who they were being told to attack.

Poor men dying on behalf of the powerful is the way of the world. The way of Christ is the opposite. Christ was the wealthiest but became the poorest. He was the most powerful but became the weakest. Rather than allow us to be casualties of sin and death, God, in Christ, leapt in front of the bullets and died in our place. Yet, through God’s power he won the war with sin and death, conquering them through the cross and shaming them through his bodily resurrection. Thank God that in the war against sin and death, it is God who fights for us.

Lord, we pray for the poor at war and for the powerful who send them to it.
Whether the military conscript or the mother huddled in a bomb shelter, we pray for you to touch the poor and weak to save them.

Lord, fight for the weak and the powerless.
Frustrate the plans of the powerful.
Use the weak to overcome the strong.
And to those commanded to do wickedness, give bravery to rebel.

Read more about Prayer Amidst Evil :: Guided Prayer
Christ promised we would have trouble in this world, and many people are willing to aid that promise coming true.

Read more about Facts and Harsh Realities
God will not remain silent or stand aloof. He is with the suffering and the dying and those responsible will face justice.