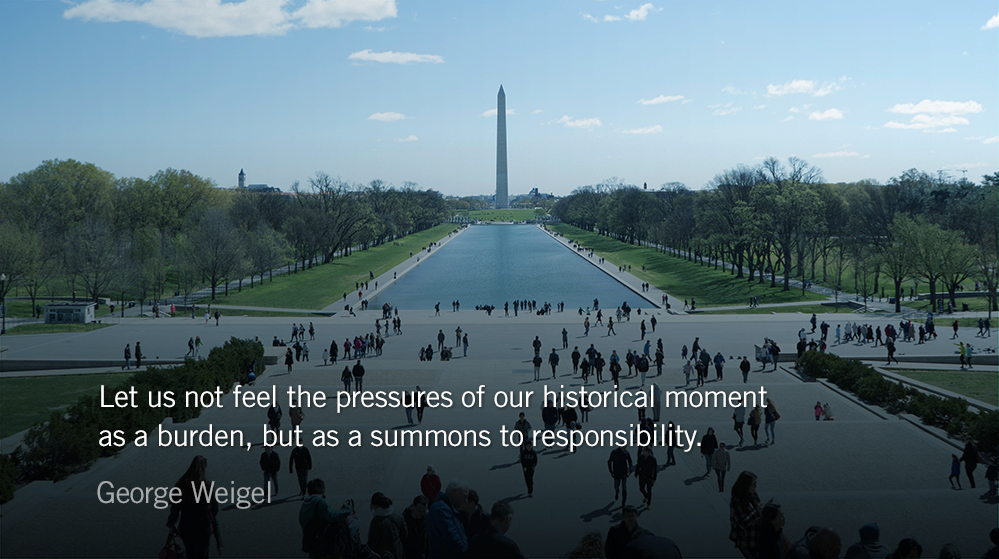 St. Augustine, in his beautiful work, The City of God, describes peace as tranquillitas ordinis—“the tranquility of order.” Far from a simple—passive—lack of strife, peace is something that is the result of intentional and sacrificial labor. George Weigel, recipient of the 2016 Peace Prize of the Universal Peace Project, observes of Augustine’s view:

This was not any “order,” of course. Rather, what Augustine sought was an “order” rooted in justice: an “order” in which men and women could live out their responsibility to promote the common good; an “order” that made possible virtue in public life. Today, we might translate Augustine’s definition of peace by thinking of tranquillitas ordinis as dynamic, rightly ordered political community, within and among states.

Weigel reminds us that Augustine penned “the tranquility of order” at a time in history “when the civilization he knew and cherished was crumbling around him.” As if his parallel to our modern predicament wasn’t clear enough, the Peace Prize recipient continues, “Such an ‘order’—such a ‘peace’—does not just happen. It is an ongoing work of moral responsibility.”

Of course, “moral responsibility” is part of what has made this election cycle so exhausting. In most elections, and with many things in this election, the language of morality is invoked more often to imbue meaning to what would otherwise be considered opinion or party difference.

For what may be the first time in our country’s history, a major party candidate has boasted that he sexually abuses women. Following the candidate’s casual dismissal of the recording—and inexplicable disregard for his victims as they came forward acknowledging that Trump did do what he so gleefully admitted to—I received a Facebook message:

I am one of many women who is a rape and sexual assault survivor. Please make no mistake that what Mr. Trump described was assault. I’ve been through trauma therapy and have been in recovery for a long time. When I heard the tape and those words, I was thrown into a PTSD episode that I’m still working through. I was blindsided.

How we long for Augustine’s tranquility of order. But it cannot be obtained by through a candidate who has no respect for such order. Christianity Today’s Executive Editor Andy Crouch laments:

There is hardly any public person in America today who has more exemplified the “earthly nature” (“flesh” in the King James and the literal Greek) that Paul urges the Colossians to shed: “sexual immorality, impurity, lust, evil desires, and greed, which is idolatry.” This is an incredibly apt summary of Trump’s life to date….

Most Christians who support Trump have done so with reluctant strategic calculation, largely based on the president’s power to appoint members of the Supreme Court…. But there is a point at which strategy becomes its own form of idolatry—an attempt to manipulate the levers of history in favor of the causes we support.

Our choice, as Christians, is not between two candidates—it is between trusting in God and placing our faith in a politician or party. In this way, today’s election is no different from years past. There is a clear moral responsibility to embrace, no doubt. But, as George Weigel concludes in his acceptance of the peace prize:

Let us not feel the pressures of our historical moment as a burden, but as a summons to responsibility. For in the exercise of that responsibility, we may come to feel a different weight, the “weight of glory” promised to those who are true peacemakers.