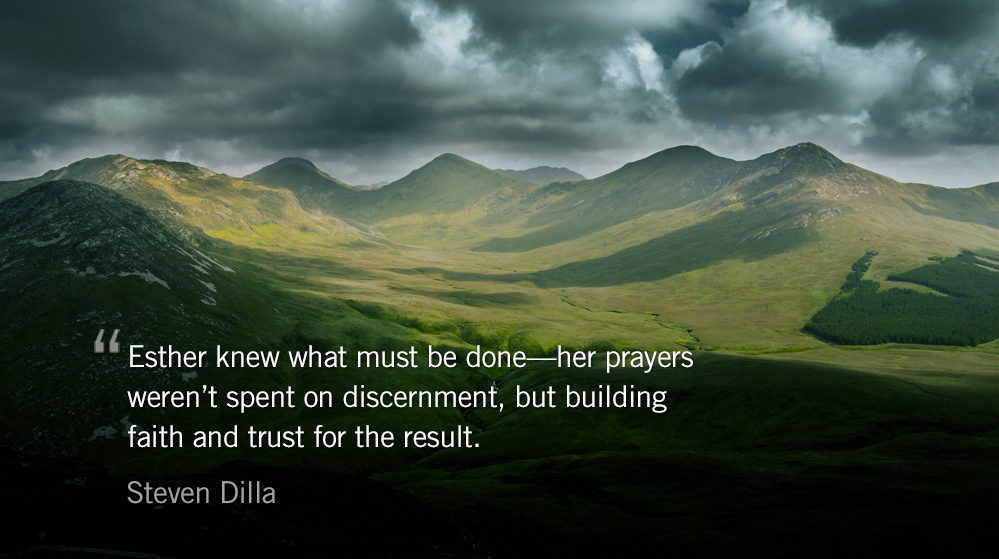 One Reason to Stop Praying

We hold prayer to be one of the most sacred and powerful acts of faith. “It is the insight into the mystery of reality, the sense of the ineffable, that enables us to pray,” remarks Abraham Joshua Heschel. Remarkable things blossom when the prayers of the saints join in the work of the Spirit.
It is almost shocking not to see prayer in this part of Esther’s story. She is told she must risk her life and approach the king—that her people will be murdered if she isn’t successful. Her reply is bold and decisive; she responds without pause for prayer, “I will go to the king… if I perish, I perish.” It’s at this point that Charles Swindoll, in his book Esther: A Woman of Strength and Dignity, remarks:

Is that a great answer or what? Is this a great woman? She’s had only a few moments to consider what Mordecai had told her, a brief slice of time to weigh his counsel. It was all she needed. She is determined to make a difference, no matter what the consequences to her personally:
‘If I perish, I perish. If a guard drives a sword through my body, I die doing the right thing.’ She has changed from fear to abandonment and faith, from hesitation to confidence and determination, from concern for her own safety to concern for her people’s survival. She has reached her own personal hour of decision and has not been found wanting.

Esther calls her people to fast—not so she can discern what is proper to do, but so God would sway the heart of the king. She knew what must be done—her prayers weren’t spent on discernment, but upon building faith and trust for the result.
It was in the middle of another miraculous rescue, as the Egyptians were closing in on Israel after their exodus, that God asked Moses, “Why do you cry to me? Tell the people of Israel to go forward.” Moses needed
confidence like Esther. Prayer for what action to take wasn’t needed—the time had come for courageous faith.
Esther didn’t pray to discern what action to take. We find her seeking God, calling her people to fast, as she realizes her actions alone will be insufficient in meeting the deepest needs of her people.