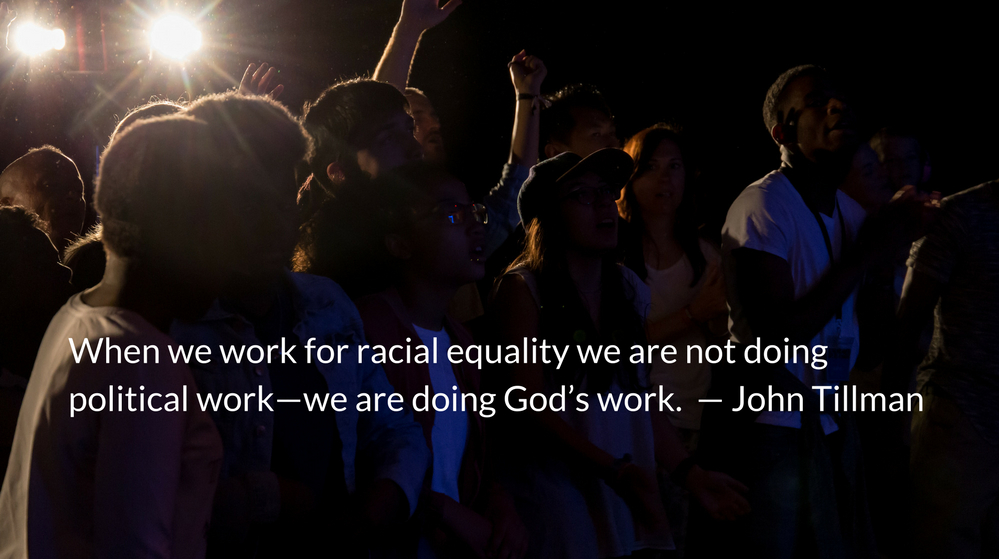 Love, Suffering, and the Struggle for Racial Equality

Scripture: Galatians 3:28
There is neither Jew nor Gentile, neither slave nor free, nor is there male and female, for you are all one in Christ Jesus.

Reflection: Love, Suffering, and the Struggle for Racial Equality
By John Tillman

Racism was not “solved” in the 60s during the civil rights era. As we read from Dr. Hayashida’s remarks from forty years ago, we see clearly the struggle was still ongoing in 1978, and we must acknowledge that it is still ongoing today.

I believe ethnic minority Christians need encouragement. For although they are Christians, the biting reality remains that they are still ethnic minorities, people who continue to contest for equality in all phases of American society….

Laws are changing. But laws and societal restructuring represent mere surface modifications. Many living in American society are experiencing no great transformation of racial attitudes. It’s easier to melt steel than it is to soften the rigid sinews of a warped heart. Because of slow-changing racial attitudes, then, I feel ethnic minority Christians must be encouraged to understand their spiritual identity in Christ Jesus.

Dr. Hayashida goes on to encourage minority Christians to study 1 Corinthians 13 and to embody the “suffering” verbs in the King James translation: suffereth, beareth, believeth, hopeth, and endureth.

It is this bountiful love of God that powers an individual to endure his hurts.

I’m not suggesting that Christians stand idly by while evil and injustice run rampant. But a Christian is asked to endure while actively working for justice, which I recognize is often slow in coming. We must suffer for Christ’s sake—a task for the strong, not the weak.

Racism must never be thought of by Christians as a problem solved by some previous era or some significant historical event. History has taught us that racism springs to life anew in each generation. In the current racial struggles that our world is facing, denial equals complicity.

When we work for racial equality we are not doing political work—we are doing God’s work. We must struggle and suffer together with God as we engage in his work of bringing freedom and equality to every people. As we do, God suffers and works with us.

The Bible reveals a God who shares in the travails of his people…I know of no other religion that makes such ado about a transcendent God who grieves for and with his people (the saints) and all people (non-believers, as Jesus weeping for the stiff-necked city of Jerusalem).

As God suffers for mankind, learn to share his sensitivities. God truly identifies in your sorrows. You are not alone. God is with you. May we be with him.

A Reading
…Anyone who does not take his cross and follow in my footsteps is not worthy of me. Anyone who finds his life will lose it; anyone who loses his life for my sake will find it. — Matthew 10:38-39