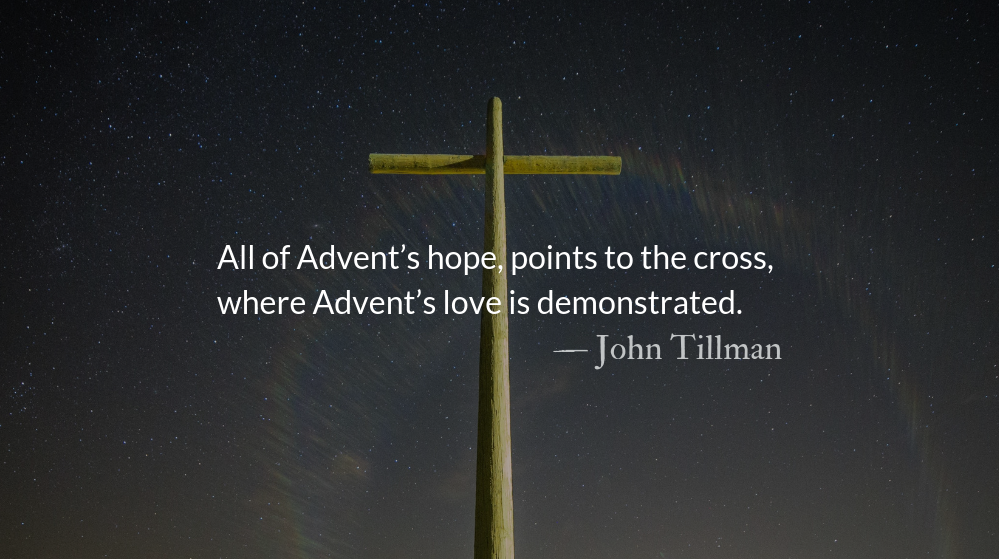 Love that Points to the Cross :: Love of Advent

Haggai 2.9
In this place I will grant peace,’ declares the Lord Almighty.

John 3.14-15
Just as Moses lifted up the snake in the wilderness, so the Son of Man must be lifted up, that everyone who believes may have eternal life in him.

Reflection: Love that Points to the Cross :: Love of Advent
By John Tillman

Both have concerns—an old man’s doubts and a young girl’s fears. Both are answered with a lesson about God’s Spirit and God’s Word.

The young girl answers in faith and humility, and steps into her role as Christ’s mother and in many ways his first disciple and first evangelist.

The old man’s answers are not so obvious. But the rest of Nicodemus’s appearances in scripture show us a man questioning, risking his position, his reputation, and his life. He is in labor, delivering faith.

That faith crystalizes when he sees Christ lifted up, as he predicted, on the cross. That faith moves him out of the shadows to claim the body of Christ from the cross when Christ’s more public followers were hiding.

Hope Leads to the Cross
By Matt Tullos

The cross stands as a monument of grace in all its aspects.
The cross remains an icon representing a moment in history when our glorious God stepped into the suffering of humanity. No longer could one see God as a mere spectator of suffering and injustice. We could no longer look upon the face of a mother holding a lifeless child, an innocent convict, or a casualty of war and not remember Christ, because He suffered too.
He was divine and perfect.
He knew evil.
He saw life in all its wonder and atrocity.
He was triangulated in the crosshairs of nefarious conspirators.
He propelled Himself into the arena purposefully and with full cognizance.
No symbol known to man has endured with as much renown as the cross. The length of it, reaches down to the ground where all men live and die and then back up again connecting heaven and earth. The width of it, like arrows, stretches from man to man connecting all races and generations.
The cross outshines my verbosity. It confounds me. I see it in glimpses.
There is no greater irony.
Beautiful,
ghastly,
wondrous,
humble,
shameful
and stuffed with glory.

Prayer: The Morning Psalm
He will make your righteousness as clear as the light and your just dealing as the noonday.  — Psalm 37:6

Additional Reading
Read More The Path of the Cross :: A Guided Prayer
A Christ who brings earthly victory enjoys near universal welcome. Everyone rejected the suffering Christ. Even the closest of his disciples.

Read More about Evil and the Cross
“Theologies of the cross, of atonement, have not in my view grappled sufficiently with the larger problem of evil,” laments N.T. Wright.