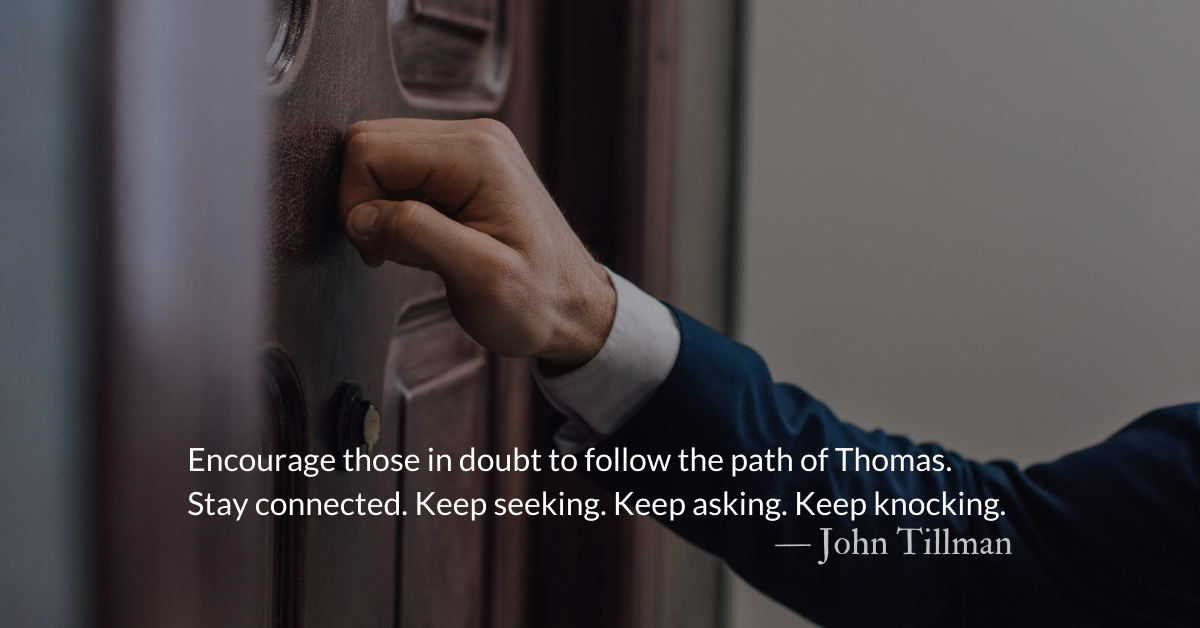 Scripture Focus: John 20.27
Then he said to Thomas, “Put your finger here; see my hands. Reach out your hand and put it into my side. Stop doubting and believe.”

From John: We’ll close out this Easter week by looking back at two significant post-resurrection appearances of Jesus. First is Thomas. Jesus loves doubters and John’s story about Thomas is meant to respect doubters, not to shame them. Jesus invites investigation.

Far from putting Thomas down, John treats Thomas’s journey from doubt to faith with respect and tenderness. It was not John’s intention to make Thomas the butt of pastors’ “doubt” jokes for millennia.

Every moment in John’s gospel is carefully crafted and chosen, appearing for a purpose. Where the synoptic gospel writers focus heavily on sequential timelines and explicitly tying events to historical markers, John does not. John’s gospel arrangement is thematic rather than chronological and pedagogical rather than historical. There are seven signs or miracles, seven “I am” statements by Jesus, seven “You are” statements of witnesses about Jesus, seven statements of aspects of Jesus’ equality with God, and seven word-pictures of faith.

John confesses that there are not enough books to contain an unabridged record of what Jesus did. Instead, John’s purpose is setting forth Christ’s deity that we may believe and have life. (John 20.31) Jesus also says to Thomas and the rest of the disciples, “Blessed are those who have not seen and yet have believed.” (John 20.29)

John was writing later than the other evangelists (between 85-95 A.D, 20 years after the synoptics) and probably from Ephesus. Other than the synoptics, his audience had little access to direct eyewitness accounts other than his own. This may be why John emphasized the importance of believing in Jesus without physically seeing him and he uses Thomas as his example.

Instead of being the butt of bad jokes about doubt Thomas could be held up as a model of how to overcome doubt. It is easy to take shots at Thomas for not taking the other disciples at their word, however, none of them (except John) believed without seeing and John had the benefit of seeing the empty tomb. Thomas stayed near, continued searching, continued in fellowship with his friends for a week that must have seemed like a year before Jesus finally appeared personally to him.

Encourage those in doubt to follow the path of Thomas. Stay connected. Keep seeking. Keep asking. Keep knocking. Those who truly wish to conquer doubt will not fail to find Jesus showing them his hands, feet, and side.

Divine Hours Prayer: A Reading
Jesus taught us, saying: “He who comes from above is above all others; he who is of the earth is earthly himself and speaks in an earthly way. He who comes from heaven bears witness to things he has seen and heard…since he whom God has sent speaks God’s own words, for God gives him the Spirit without reserve.” — John 3.31

Read more about God of the Weak and Doubtful
Oh, you of little faith…He accepts and encourages you today. You who doubt…He holds out his hand…to all of us doubters.

Read more about The Interruptions of Easter
Respond to Jesus right in the middle of your fears, sorrows, doubts, and guilt.