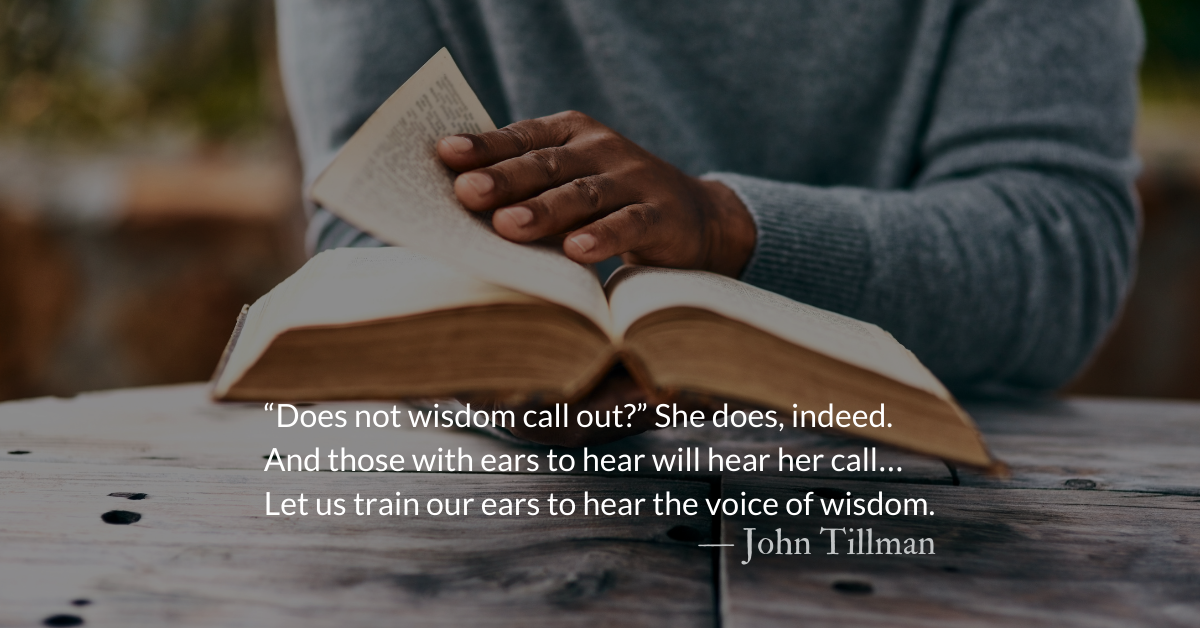 Scripture Focus: Proverbs 8.23-29
23 I was formed long ages ago,
at the very beginning, when the world came to be.
24 When there were no watery depths, I was given birth,
when there were no springs overflowing with water;
25 before the mountains were settled in place,
before the hills, I was given birth,
26 before he made the world or its fields
or any of the dust of the earth.
27 I was there when he set the heavens in place,
when he marked out the horizon on the face of the deep,
28 when he established the clouds above
and fixed securely the fountains of the deep,
29 when he gave the sea its boundary
so the waters would not overstep his command,
and when he marked out the foundations of the earth.

We sometimes think of Proverbs as a collection of unrelated quips and quotes. Most people have probably quoted proverbs as proof-texts of indisputable facts of wisdom. We can reach into Proverbs as if it was a heap of fortune cookie sayings and pull from the pile a pithy quip to punch up an argument. It’s not that Proverbs doesn’t provide wise sayings. It does. But Proverbs also contains narratives that mirror the larger biblical story.

The writer speaks in the voice of a father teaching a child and uses characters who speak to illustrate his lessons. After the cloying voice of the temptress, and vivid descriptions of her hapless victims, a new voice speaks out in Proverbs—Lady Wisdom.

The description of Lady Wisdom reflects on the creation account of Genesis. There are metaphorical parallels in her description that apply to God, God’s Spirit, or even to Jesus as the Logos that John spoke of who created the world (John 1.1-4). However, this passage is not describing a member of the triune God or a separate, literal, spiritual being. Lady Wisdom is a personification of one of God’s qualities. It is one of the many places in which God, or an aspect of God, is described in explicitly feminine terms.

Wisdom and folly are competing voices. These women, the temptress of folly and the mistress of wisdom, represent a choice being set before all people. This choice echoes back to God’s words as the people entered the promised land: “I have set before you life and death.” (Deuteronomy 30.19-20) They echo the choice described when humans were placed in Eden: “you must not eat from the tree…when you eat from it you will certainly die.: (Genesis 2.17)

The writer is using these metaphorical women’s voices to instruct his students: “There are choices before you. Choose life.”

“Does not wisdom call out?” (Proverbs 8.1) She does, indeed. And those with ears to hear will hear her call. The narrative of proverbs is one in which one generation is training another to hear wisdom’s voice. Let us train our ears to hear the voice of wisdom. Let us be proactive, as the writer of proverbs is, to train others to recognize the difference between the keening voice of folly and wail of wisdom. “Why will you die?” (Ezekiel 33.11) God calls out, begging us to turn from folly and live.

From John: As we talk about Lady Folly and Lady Wisdom this week, we’ll share this poem dramatizing the two ladies. It’s worth the repetition and meditation.

Read more about Lady Folly
The seductress…Lady Folly. The woman is crafty. She is wealthy and intelligent. She has an aim and meticulously sets her trap.

Read more about Solomon’s Folly
None of us are Solomon but we can all fall for Solomon’s folly…Any of us can apply a God-given skill, like wisdom, in a foolish and sinful way.