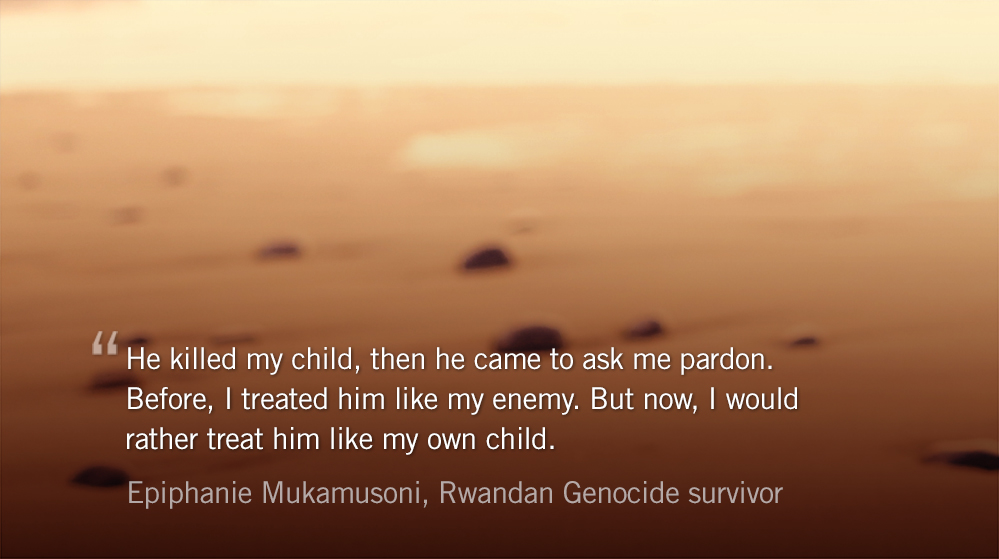 We are afflicted in every way, but not crushed… struck down, but not destroyed.

“I burned her house. I attacked her in order to kill her and her children, but God protected them, and they escaped.” — Godefroid Mudaheranwa, Rwandan Genocide perpetrator

“In this world you will have trouble,” says Jesus. The hope of the gospel is not the removal of suffering, but the reorientation of followers of Christ toward it. We can be struck down, but we will not be destroyed. While we have few examples of what this looks like, some of the most striking come from our darkest hours.
Over 800,000 people were slaughtered during the the Rwandan Genocide in 1994. The perpetrators were merciless, even using AIDS infected men as a tool of systematic destruction. Of the 250,000 women who were raped, 67% were intentionally infected with HIV. Homes were burned and children were massacred as the majority of an ethnic group was consumed by the fangs of evil running rampant.

“He killed my child, then he came to ask me pardon. I immediately granted it to him because he did not do it by himself — he was haunted by the devil… Before, when I had not yet granted him pardon, he could not come close to me. I treated him like my enemy. But now, I would rather treat him like my own child.” — Epiphanie Mukamusoni, Rwandan Genocide survivor

These words, recorded as part of a New York Times photoessay, are in many ways the direct result of the work being done by Association Modeste et Innocent. The group is the Rwandan branch of Pax Christi International Catholic Peace Movement and is dedicated to modeling, teaching, and facilitating reconciliation between perpetrators and survivors.
There are no simple answers to those who have been struck down. In the last two years, half of the 20,000 children who were conceived in rape have dropped out of school to care for their families, the prison system is overrun by crimes of genocide, and 70% of survivors have a monthly income of less than $8.00.
Yet faith has given a way of forgiveness — which has opened the door for reconciliation — and created a path for life to move forward. The woman who escaped Godefroid Mudaheranwa’s attack, mentioned above, now says this:

“I used to hate him. When he came to my house and knelt down before me and asked for forgiveness, I was moved by his sincerity. Now, if I cry for help, he comes to rescue me. When I face any issue, I call him.” — Evasta Mukanyandwi, Rwandan Genocide survivor

Jesus’ promise in saying “you will have trouble,” is this: “Take heart; I have overcome the world.”