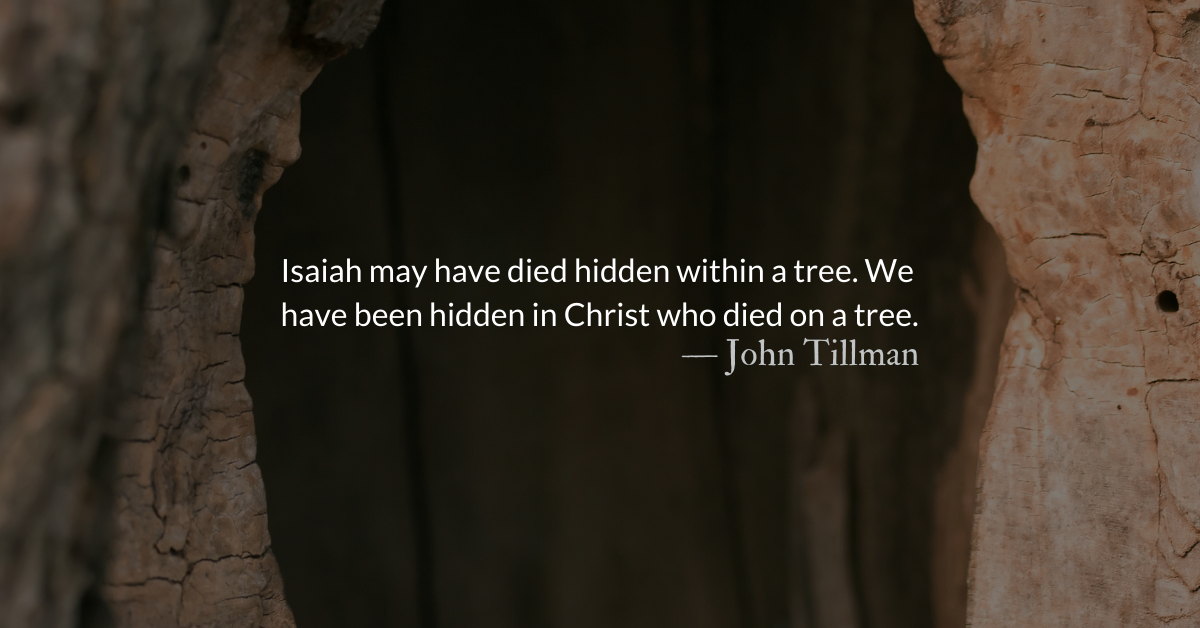 Scripture Focus: 2 Kings 21.11-12, 16
11 “Manasseh king of Judah has committed these detestable sins. He has done more evil than the Amorites who preceded him and has led Judah into sin with his idols. 12 Therefore this is what the Lord, the God of Israel, says: I am going to bring such disaster on Jerusalem and Judah that the ears of everyone who hears of it will tingle.

16 Moreover, Manasseh also shed so much innocent blood that he filled Jerusalem from end to end—besides the sin that he had caused Judah to commit, so that they did evil in the eyes of the Lord.

Hebrews 3.5-6
5 “Moses was faithful as a servant in all God’s house,” a bearing witness to what would be spoken by God in the future. 6 But Christ is faithful as the Son over God’s house. And we are his house, if indeed we hold firmly to our confidence and the hope in which we glory.

Hebrews 11.37-38
37 They were put to death by stoning; they were sawed in two; they were killed by the sword. They went about in sheepskins and goatskins, destitute, persecuted and mistreated—38 the world was not worthy of them.

Israelites continued Canaanite idol worship, including child sacrifice. Manasseh sacrificed his own son. If the king did it, we can be sure that many leaders and followers did as well.

Modern readers often focus on titillating and exotic-sounding sins. Child sacrifice and idol worship involving sex grabs headlines in any era. However, focusing on these exotic sins can distance us from scripture, allowing a smug sense of superiority over ancient idolaters.

The prophets take a wider scope. It is unlikely the “innocent blood” (1 Kings 21.16) Manassah shed refers exclusively to child sacrifice. This phrase consistently highlights the oppression of the poor and the killing of God’s prophets. (Isaiah 59.3; Jeremiah 2.34; 7.6-7; 22.17; Hosea 4.2) The prophets cut to the heart of the sins of our age as well—to the oppression of the poor and misuse of power.

The non-canonical book, Ascension of Isaiah, tells us Isaiah hid in the hollow of a cedar tree while fleeing Manasseh. Manasseh found him and sawed the tree in half with Isaiah still inside it. Bible commentators believe Hebrews 11.37, “sawed in two,” may refer to this story. True or not, this symbolism is consistent with much of the scripture

Trees are symbols of God’s blessing throughout the Bible and many times kings and kingdoms are represented as trees in which birds and animals find shelter. But Israel and Judah were not trees that brought harvests of righteousness. Bloodshed and injustice bloomed.

The problem with idols is not only that they insult the one true God but also the evil that we do in their service. God wants his people to bless, not curse. It is part of the Abrahamic promise and Mosaic covenant. Christians are grafted into this covenant and included in this promise. (Romans 11.17-20)

God is holy. If we serve him faithfully, we’ll bless people with tangible and spiritual blessings. Idols are unholy, serving selfish desires. Following idols, even with the best of intentions, causes spiritual and tangible damage to people. Trees are known by fruit and orthodoxy by orthopraxy.

Isaiah may have died hidden within a tree. We have been hidden in Christ who died on a tree. (Colossians 3.3)
Like Isaiah, may we admit our own and our culture’s uncleanness (Isaiah 6.5).
We die to ourselves upon Christ’s cross: “the hope in which we glory.” (Hebrews 3.6)
United with him, we will not be abandoned to the grave but will rise with healing for the nations.


Divine Hours Prayer: The Refrain for the Morning Lessons
“Because the needy are oppressed, and the poor cry out in misery, I will rise up,” says the Lord, “And give them the help they long for.” — Psalm 12.5

Read more about Praying Through Ancient Hymns
It seems much of the most profound art in the church was originally intended for children. This hymn is one example…

Read more about A Hymn of the Oppressed
History might be very different if rather than idolizing the martyrs, we could study how not to become the oppressors.